Climate Change and its Impact to Atlantic Coast Fisheries Resource 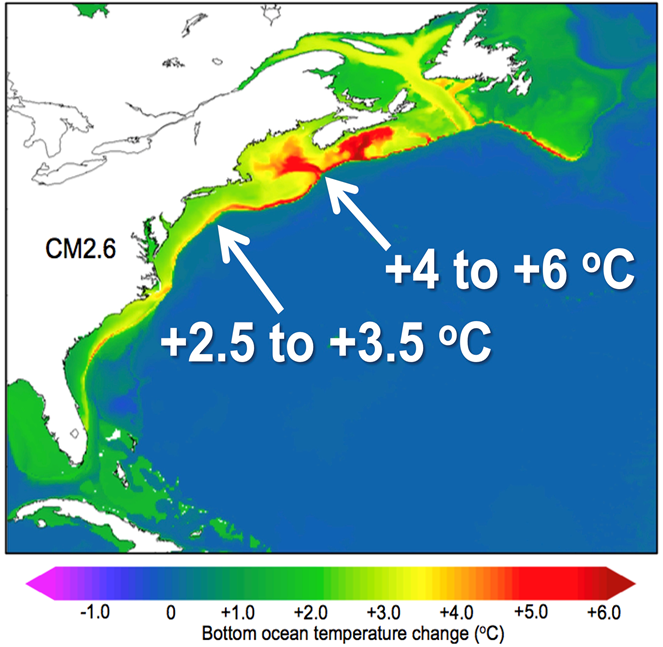 Global climate models can project how ocean conditions will change over time. This figure shows how ocean bottom temperatures are projected to increase, especially north of Cape Hatteras, NC by the 2060s to 2080s under a scenario where carbon dioxide (CO2) increases by 1% per year and doubles after 70 years, representing a “high CO2 emissions” scenario. Image © NOAA Fisheries NEFSC

Climate change is a multi-faceted issue with far reaching implications to coastal and marine systems. Decades of greenhouse gas emissions released heat that has largely been absorbed by the world’s oceans and, since the 1900s, ocean temperatures have steadily increased. The U.S. Atlantic coast is no exception and while there has been year-to-year variability in water temperatures, the overall trend is increasing over time. One spot that is undergoing accelerated heating is the Gulf of Maine, which is warming faster than 99% of the world’s oceans. Located at the convergence of the cold Labrador Current from the Arctic and the warm Gulf Stream from the south, the region is susceptible to rapid change.

In response to ocean warming, many species of fish are experiencing climate-related shifts in distribution, abundance, and productivity, often at a faster rate than fisheries stock assessments and management can keep pace with. For some species, warmer waters create inhospitable environments for reproduction and survivability, causing significant stock declines with limited prospects for recovery. Other species, however, are shifting their distributions and expanding into cooler, deeper, and/or more northern waters to stay within their preferred temperature ranges. For species that are declining due to factors other than fishing mortality (e.g., habitat degradation and availability, predation), current environmental conditions will make recovery even more challenging. Although the future is uncertain, a continuation or acceleration of climate change and ocean warming has the potential to strain our existing fisheries management system and alter the way fishermen, scientists, and the public interact with the marine environment.

Role of the Commission and the Atlantic Coast States

With their primary authority to manage fisheries and fishing related impacts, the Commission and its member states are limited in their ability to actually affect climate change and habitat degradation. Instead, the Commission and states have focused on developing tools to help fisheries managers and stakeholders adapt to the fishery-related impacts of changing ocean temperatures. One tool is restricting fishing effort (and in some case moratoria) on stocks most heavily affected by inhospitable environmental factors. Other tools include resources produced by the Habitat Committee and Climate Change Work Group, respectively, that identify each state’s ongoing practices to address climate change impacts, and provide guidance to aid fisheries managers in revising state allocation based on changes in species distribution.  The Commission also supports and provides an administrative home to the Atlantic Coastal Fish Habitat Partnership, which is dedicated to conserving fish habitat through education, advocacy, and funding on the ground projects.

The Commission is also actively involved in a project called the East Coast Climate Change Scenario Planning Initiative that uses scenario planning as a way of exploring how fisheries management may need to evolve over the next few decades in response to climate change.  The initiative is being organized by a Core Team of representatives from the New England, Mid-Atlantic, and South Atlantic Fishery Management Councils, the Atlantic States Marine Fisheries Commission, and NOAA Fisheries. Over the next year, these organizations will bring together fishery participants, fishery managers, researchers, and other stakeholders to discuss climate change issues. The intent is to emerge with ideas and recommendations for how fishery management can adapt to climate change. Nothing will happen immediately. Managers will need to discuss the recommendations from the scenario planning project to determine next steps.

Below are some of the species that have been impacted by climate change and the management response that has been taken to help with their recovery or adapt to their new distributions.

Based on the 2019 stock assessment update, Gulf of Maine northern shrimp are depleted. Biomass has been at extremely low levels since 2011. The traffic light analysis (a tool for monitoring changes in species abundance) indicated no improvement in status in 2019, with indices of abundance, biomass, spawning stock biomass, and recruitment at new time-series lows.

Ocean temperatures in western Gulf of Maine shrimp habitat have reached unprecedented highs within the past several years due to climate change. Northern shrimp recruitment is highly dependent on colder temperatures, and with the environment becoming increasingly more inhospitable, their recovery will be very difficult. The Northern Shrimp Technical Committee considers the stock to be in poor condition with limited prospects for the near future. As a result, the northern shrimp fishery has been under a moratorium since 2014. The moratorium was set in response to the low levels of biomass and recruitment and the fact that, should recruitment improve, it would take several years for those shrimp to be commercially harvestable. The Northern Shrimp Section also established a work group to evaluate management strategies for northern shrimp given changes in species abundance, particularly as a result of changing ocean conditions.

The American lobster population is divided into two biological stock units which include the Gulf of Maine and Georges Bank (GOM/GBK) and Southern New England (SNE). The results of the 2020 Benchmark Stock Assessment present different pictures of stock health for GOM/GBK and SNE. The GOM/GBK stock has seen record high stock abundance and recruitment, while SNE has experienced record low abundance and recruitment. Stock productivity has been declining in SNE, indicating reproductive success is insufficient to sustain a stable population. The assessment used regime shift analysis to understand shifts in abundance and stock productivity driven by changing environmental conditions. For the SNE stock, a shift was observed from a high abundance regime to a low abundance regime and the GOM/GBK showed the opposite.

There is extensive research to support the connections between environmental conditions and American lobster life history and population dynamics. Lobster generally avoid water temperatures below 5°C and above 18°C. Prolonged temperatures above 20.5°C can induce respiratory stress and have been shown to limit recruitment and increase the incidence of shell disease. Conditions for the southwestern portion of the GOM/GBK stock and the entirety of the SNE stock have become progressively stressful for lobsters in recent years. Since 2003, the American Lobster Board has been increasingly concerned about the SNE stock. Even in the absence of fishing pressure, managers were concerned SNE lobsters might never rebuild to historic levels, leaving them to question if stocks like these can be restored through highly restrictive fishery management measures or if the remaining fishing fleet should be allowed to harvest these fisheries until there is no economic incentive to do so. Ultimately, the Board decided to work to minimize economic hardship to the industry while beginning to cut back on fishing pressure.

In 2021, the Board reinitiated development of Draft Addendum XXVII, with the goal of increasing the resiliency of the GOM/GBK stock by considering the standardization of management measures across management areas. This action is intended to be proactive in response to signs of reduced larval settlement and juvenile recruitment.

The 2020 Atlantic Cobia Benchmark Stock Assessment found that the stock is not overfished nor experiencing overfishing. Atlantic cobia biomass has shown a pattern of rapid increase in strong recruitment years followed by years of decline. These strong year classes have maintained the stock above the overfished threshold through subsequent periods of biomass decline since the 1980s.

The migratory nature of Atlantic cobia makes them particularly sensitive to changing ocean conditions, affecting the timing of migration as well as their general distribution. Recent research from the Virginia Institute of Marine Science (VIMS) has revealed that cobia have a broad tolerance for temperatures as warm as 90°F and for areas with low oxygen concentrations. Future projections of cobia distribution show that during summer months the percentage of suitable cobia habitat will increase in waters north of Virginia and decrease in waters south of Virginia with waters off the coast of New Jersey becoming their most suitable habitat. The new research suggests that Atlantic cobia’s broad environmental tolerances will provide resiliency to climate change. Since 2017, management of Atlantic cobia has been cooperative between the South Atlantic and Gulf of Mexico Fishery Management Councils. In 2019, the Commission approved Amendment 1 to the Fishery Management Plan, which transitioned the plan to sole management by the Commission due in part to the expanded species range.

Find more information in this story map created by researchers at VIMS: https://arcg.is/1Gem8X, as well as on the Commission’s Atlantic cobia webpage at http://www.asmfc.org/species/cobia

Based on the 2019 operational stock assessment, black sea bass are not overfished and overfishing is not occurring. The assessment found spawning stock biomass to be 73.65 million pounds, 2.4 times the biomass target of 31.07 million pounds. However, 2018 recruitment fell below the time series average.

Over the past decade, the distribution of black sea bass catches have generally expanded northward due to warming waters. The northern range, thought to only extend as far up as New York, has grown considerably with landings becoming more commonplace in the Gulf of Maine waters off Massachusetts, New Hampshire, and Maine. In some cases, expansion of the black sea bass stock into areas with historically minimal fishing effort has created significant disparities between state allocations and current abundance and resource availability. To achieve a more balanced access to the resource, the Commission and Council adopted Addendum XXXIII to modify the state allocations of the commercial black sea bass quota based on initial allocations plus new information on species abundance and distribution. As a result, New York’s and Connecticut’s baseline allocation have been increased to address their disproportionally low allocation compared to the increased availability of black sea bass in state waters.

Winter flounder is managed as three stocks; Georges Bank (GBK), Gulf of Maine (GOM), and Southern New England/Mid-Atlantic (SNE/MA). The 2020 GOM management track stock assessment indicates overfishing is not occurring and since the stock biomass is unknown, an overfished status cannot be determined. The 2020 SNE/MA management track stock assessment indicates the stock is overfished, but overfishing is not occurring. In 2019 spawning stock biomass was estimated to be 32% of the biomass target and 64% of the biomass threshold.

Fishing pressure on the stock has significantly decreased over time, but recruitment remains at time series lows. Managers discussed the need to better characterize the role that environmental indicators and climatic shifts play in the SNE/MA stock’s depleted status. GOM stock assessment results are also puzzling because fishing mortality remains at time series lows, but indices of abundance seem to be unaffected. There is evidence to support a lack of suitable habitat and other environmental factors are limiting the stocks’ ability to rebuild. A study by Bell et al. in 2017 found stock productivity to be reduced under warmer conditions and rebuilding to historical levels may not be possible. Since the 2008 benchmark stock assessment, which estimated the SNE/MA stock at 9% of the target biomass, the Winter Flounder Board has initiated 3 addenda that include various measures to reduce catch and fishing mortality for the SNE stock and modify management requirements for the GOM stock.

This page serves as a brief introduction to the impacts of climate change on fisheries, and the Commission is one of many institutions working to better understand these changes. There is an extensive amount of work being done by our partners at the federal and state level as well as many in academia to address the impacts of climate change on marine ecosystem and fisheries. For more information check out the work from these other institutions and organizations: