American lobster is a bottom-dwelling crustacean that is widely distributed over the continental shelf of North America. In the inshore waters of the U.S., it is most abundant from Maine through New Jersey, with abundance declining from north to south. Offshore, it occurs from Maine through North Carolina. The species was previously divided into three biological stock areas which included GOM, GBK, and SNE. However, data showing evidence of significant seasonal migrations of large female lobster between GOM and GBK suggests these two stocks are not closed populations. As a result, the GOM and GBK were combined into a single biological unit (GOM/GBK).

Lobster are solitary and territorial, living in a variety of habitats as long as there is a burrow or crevice where they can take cover. They usually remain within a home range of about 5-10 square km. In offshore areas, large mature lobster make seasonal migrations inshore to reproduce. In southern inshore areas, large lobster may move to deeper, cooler waters seasonally or permanently.

Reproduction and growth are linked to the molting (shedding of the lobster’s exoskeleton or shell) cycle. Lobster periodically shed (or molt) their shell to allow for growth and mating to occur. Sperm is deposited in “soft” (recently molted) females and stored internally until the eggs are released (technically referred to as extrusion), which can be as long as two years. When extruded, the eggs are fertilized and attached to the underside of the female, where they are carried for 9 to 11 months before hatching. Females hatch their eggs from mid-May to mid-June. Once hatched, lobster larvae transition through five stages. For the first four stages larvae are planktonic, swimming at or near the water surface. At the fifth larval stage, juveniles sink to the ocean floor where they remain for the rest of their lifetime (see infographic on previous page). Lobster reach market size in about 4 to 9 years, depending on water temperature and other biological factors.

Temperature is an important factor influencing lobster metabolism, spawning, development, and growth. When a female lobster extrudes eggs, temperature directly impacts the length of time the eggs are carried until hatching occurs, when surface water temperatures are above 12oC. Lobster generally avoid water temperatures below 5oC and above 18oC. Prolonged temperatures above 20.5oC can induce respiratory stress in lobster and have been shown to increase the incidence of shell disease. 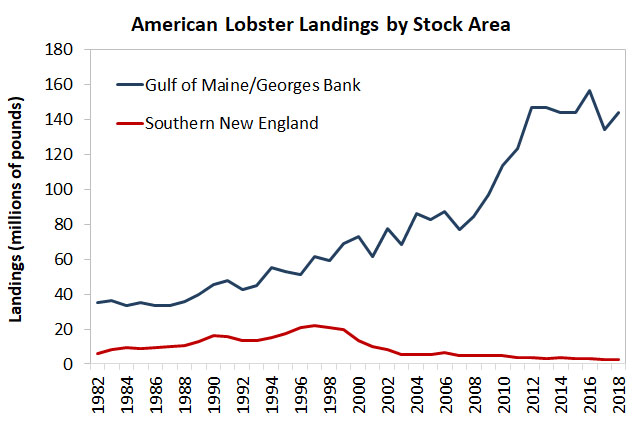 The American lobster fishery is one of the most valuable fisheries along the Atlantic coast. In 2020, approximately 121.9 million pounds of lobster were landed coastwide, representing $529 million in ex-vessel value. The vast majority of these landings came from GOM/GBK, where the stock is at record high abundance. In contrast, there has been an overall decrease in the percentage of landings from the SNE stock, which is depleted and experiencing recruitment failure (Figure 1).

Lobster pots are the predominant commercial gear, with a small percent of the landings caught by trawls. Lobster is also taken recreationally with pots and by hand while SCUBA diving. The overall quantity of recreational landings is unknown but is likely a negligible source of removals. 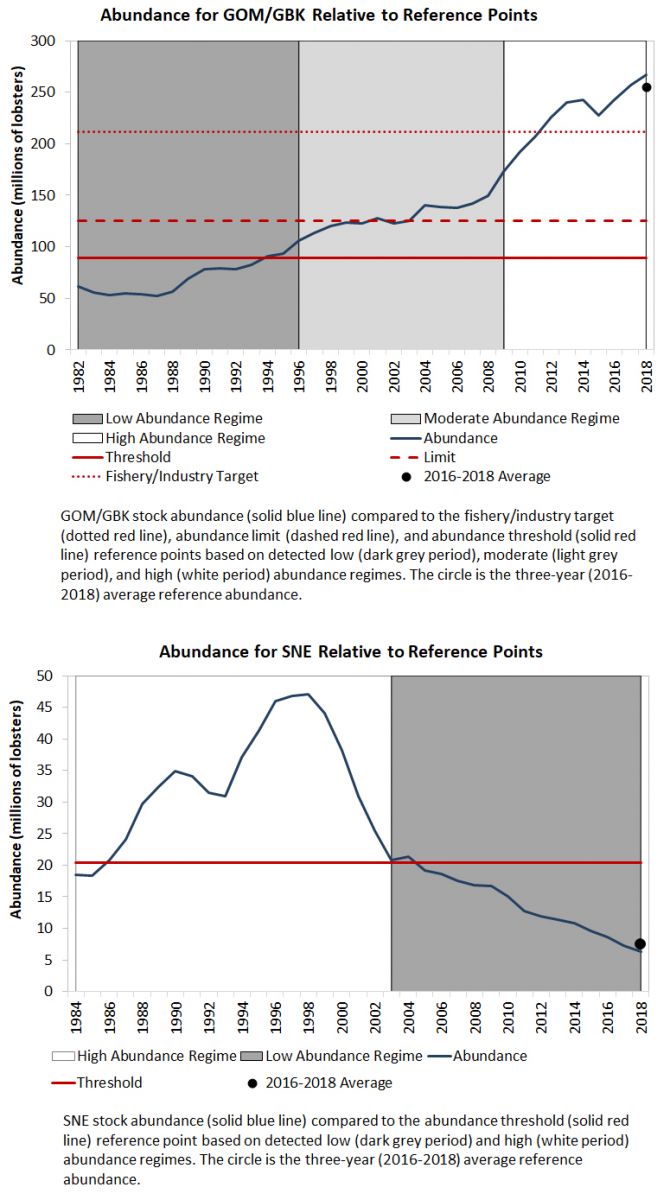 The 2020 American Lobster Benchmark Stock Assessment and Peer Review Report indicates record high stock abundance and recruitment in GOM and GBK, and record low abundance and recruitment in SNE. The GOM/GBK stock is not overfished and not experiencing overfishing. Conversely, the SNE stock remains severely depleted with poor prospects of recovery.

Given extensive research showing the connections between environmental conditions and American lobster life history and population dynamics, the 2020 assessment applied new methods to account for changing environmental influences when assessing the lobster stocks. Environmental data time series included water temperatures at several fixed monitoring stations throughout the lobster’s range, average water temperatures over large areas such as those sampled by fishery-independent surveys, oceanographic processes affecting the environment, and other environmental indicators such as lobster prey abundance. Environmental time series were analyzed for regime shifts, which indicate a significant difference in the lobster’s environment and population dynamics from one time period to another and can impact the stock’s capacity for recruitment and supporting different levels of catch. The assessment also quantified the effect of temperature on the catchability of lobster in surveys, and corrected trends in estimated abundance by accounting for these effects.

Model-estimated abundance time series were also analyzed for shifts that may be attributed to changing environmental conditions and new baselines for stock productivity. Regime shifts were detected for the GOM/GBK stock in 1996 and 2009 and one shift was detected for the SNE stock in 2003. New reference points were developed to account for the changing regimes.

The GOM/GBK stock is in favorable condition based on the recommended reference points. The average abundance from 2016-2018 was 256 million lobster, which is greater than the fishery/industry target of 212 million lobster. The average exploitation from 2016-2018 was 0.459, below the exploitation target of 0.461. Therefore the GOM/GBK lobster stock is not depleted and overfishing is not occurring.

Southern New England
SNE stock abundance increased from the early 1980s, peaked during the late 1990s, then declined steeply through the early 2000s to a record low in 2018. Additionally, recent recruitment estimates are the lowest on record. The assessment regime shift analysis indicates the SNE stock shifted from a high abundance regime during the early 1980s through 2002 to a low abundance regime during 2003-2018 (Figure 3).

Declines in population abundance are most pronounced in the inshore portion of the stock where environmental conditions have remained unfavorable to lobster since the late 1990s. The contraction of the SNE stock has continued since the last assessment and is now becoming apparent in the offshore portion as well, according to survey encounter rates. It is believed the offshore area of SNE depends on nearshore larval settlement and offshore migration as the source of recruits (e.g., young of the year lobster).

Peer Review Panel Recommendations
The Panel endorsed the stock assessment findings that the GOM/GBK  stock is not depleted and the SNE stock is significantly depleted, and recommended the assessment be used for management advice. In particular, the Panel recommended significant management action be taken to provide the best chance of stabilizing or improving abundance and reproductive capacity of the SNE stock.

The Panel also recognized the consideration of environmental and climatic drivers on stock dynamics as a major advancement in the assessment. Given rapidly changing environmental conditions, the Panel recommended changes to stock abundance and settlement indices be monitored through an annual data update process to allow for more timely reactions to any concerning trends in the interim between the next stock assessment. Links to the Benchmark Stock Assessment and Peer Review Report, as well an overview of the assessment findings, can be found below under Stock Assessment Reports.

American lobster is managed under Amendment 3 to the Interstate Fishery Management Plan (FMP) and its Addenda (I - XXVI). The goal of the American lobster management plan is to maintain a healthy lobster resource and a management regime which provides for continued harvest, opportunities for participation, and cooperative development of conservation measures by all stakeholders. Amendment 3 establishes seven lobster conservation management areas (LCMAs): Inshore and offshore GOM (Area 1), Inshore SNE (Area 2), Offshore Waters (Area 3), Inshore and offshore Northern Mid-Atlantic (Area 4), Inshore and offshore Southern Mid-Atlantic (Area 5), Long Island Sound (Area 6) and Outer Cape Cod). Lobster Conservation Management Teams (LCMTs), composed of industry representatives, were formed for each management area. The LCMTs are charged with advising the American Lobster Board and recommending changes to the management plan within their areas. The commercial fishery is primarily controlled through minimum/maximum size limits, trap limits, and v-notching of egg-bearing females.

After the 2009 and 2015 assessments indicated the critically depleted condition of the SNE stock, the Board approved Addenda XVII - XXII, which implemented a suite of measures to reduce exploitation and allow the SNE stock to rebuild.

These measures included a v-notching program, trap reductions, closed seasons for certain areas, and trap consolidation/transferability programs. The Board also considered a suite of management measures to achieve a 5% increase in egg production; however, it decided not to pursue this management change given concern that the proposed measures would not significantly improve the stock. The Board continues to discuss future management of the SNE stock in light of environmental changes.

In 2018, the Board approved Addendum XXVI. The Addendum addresses concerns regarding deficits in existing reporting requirements by expanding the mandatory harvester reporting data elements, improving the spatial resolution of harvester data, establishing a 5-year timeline for implementation of 100% harvester reporting, and prioritizing the development of electronic harvester reporting. In addition, the Addendum improves biological sampling requirements by establishing a baseline of ten sampling trips per year in the American lobster/Jonah crab fishery, and encourages states with more than 10% of coastwide landings in either the lobster or Jonah crab fisheries to conduct additional sampling trips.

In March 2022, the Board approved Addendum XXIX, which expands on the Addendum XXVI reporting improvements by establishing electronic tracking requirements for federally-permitted vessels in the American lobster and Jonah crab fisheries. Specifically, electronic tracking devices will be required for vessels with commercial trap gear area permits for Lobster Conservation Management Areas (LCMAs) 1, 2, 3, 4, 5, and Outer Cape Cod to collect high resolution spatial and temporal effort data. Through this action the Board seeks to significantly improve stock assessment, identify areas where lobster fishing effort might present a risk to endangered North Atlantic right whales, and document the footprint of the fishery to help reduce spatial conflicts with other ocean uses like wind energy development and aquaculture.

After reviewing the 2020 Benchmark Stock Assessment and Peer Review Report, the Board reinitiated development of Draft Addendum XXVII, with the goal of increasing the resiliency of the GOM/GBK stock. The Draft Addendum includes two issues. Issue 1 considers immediate action to standardize some management measures within and across LCMAs in the GOM/GBK stock. Issue 2 considers establishing a trigger mechanism to implement management measures—specifically gauge and vent sizes—that are expected to add an additional biological buffer through the protection of spawning stock biomass. Management triggers are based on indices of recruit abundance from three surveys. In January 2022, the Draft Addendum was approved for public comment, but the ISFMP Policy Board decided to postpone public hearings until later in 2022.