Atlantic croaker (Micropogonias undulates) are a bottom-dwelling species, in the same family as red drum and weakfish. They can be found from the Gulf of Maine to Argentina, but along the US Atlantic coast, they are most abundant from the Chesapeake Bay to northern Florida. Their name is derived from croaking noises they make during the spawning season by vibrating their abdominal muscles against their swim bladder. Atlantic croaker spawn in warm pelagic waters during the fall and winter months, and the larvae and juveniles settle in estuaries to mature. The Chesapeake Bay is an important spawning and nursery habitat for croaker. Most Atlantic croaker are mature by the end of their first year. They grow quickly and may reach sizes of over 20”. The world record for Atlantic croaker is 8 lbs 11 oz. The oldest observed age is 17 years, but it is uncommon to see fish older than 10 years in the catch. 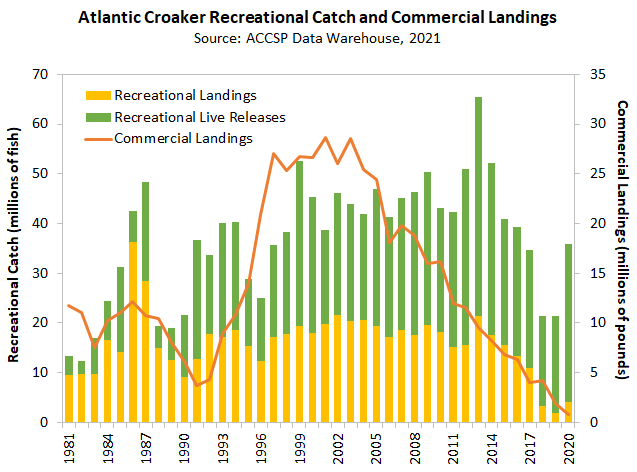 From 1981-2018, recreational landings from New Jersey through Florida have varied between 5.6 million and 36.2 million fish. Landings general increased until 2001, and were fairly stable from 2001-2013 before exhibiting a declining trend from 2013 until 2020. The 2020 landings are estimated at 10.6 million fish and 4.1 million pounds, a 91% increase in number of fish and a 121% in fish weight. The number of recreational releases generally increased over the time series until 2013 when releases steadily declined, until reaching a five year high in 2020 of 31.7 million fish released.

In 2017, a benchmark stock assessment was completed. This assessment used a stock synthesis model to address a major source of uncertainty from previous assessments – the magnitude of croaker bycatch in South Atlantic shrimp trawls. However, due to conflicting trends in abundance and harvest, as well as other uncertainties, this assessment was not recommended for management use.

A traffic light approach (TLA) is used to annually evaluate fishery trends and develop management actions when harvest and abundance thresholds are exceeded for three of the four most recent years. The name comes from assigning a color (red, yellow or green) to categorize relative levels of indicators that reflect the condition of the fish population (abundance characteristic) or fishery (harvest characteristic) relative to a reference level. For example, as harvest increases relative to the reference period (2002-2012) average, the amount of green in a given year increases, and as harvest decreases, the amount of red in that year increases. The TLA illustrates long-term trends in the stock and triggers management action in response to declines in the stock or fishery. The TLA was recently updated through Addendum III to incorporate additional fishery-independent surveys, age and length information, an updated reference period (2002-2012), regional characteristics (North: New Jersey – Virginia; South: North Carolina – Florida), and an updated management trigger mechanism.

The 2020 TLA indicated that Atlantic croaker proportion of red in both the Mid- and South Atlantic surpassed the threshold of moderate concern (30% red), triggering management measures for non-de minimis states.

Atlantic croaker are managed through the Commission’s South Atlantic State/Federal Fisheries Management Board (Board) under Amendment 1 to the Interstate Fishery Management Plan for Atlantic Croaker (2005) and its associated Addenda. The Amendment does not require any specific measures restricting harvest but encourages states with conservative measures to maintain them. It also implemented a set of management triggers, based on an annual review of certain metrics, to respond to changes in the fishery or resource and initiate a formal stock assessment on an accelerated timeline if necessary.

In March 2017, a report on Sciaenid Fish Habitat was released including information on habitat for several species, including Atlantic croaker, during all stages of their lives, their associated Essential Fish Habitats and Habitat Areas of Particular Concern, threats and uncertainties to their habitats, and recommendations for habitat management and research. This report is meant to be a resource when amending future species FMPs.

Addendum III (approved in 2020) updates the TLA’s management trigger mechanism, management responses to TLA triggers, and evaluation of the fishery’s response to measures implemented if triggers occur. The TLA will continue to be conducted annually, although the updated analysis will be used, starting in 2020. Coastwide management actions are triggered if both characteristics (harvest and abundance) in either region exceed threshold levels of red for 3 of the 4 most recent years. If management action is triggered due to exceeding the 30% red threshold, states are required to implement a 50 fish per person recreational bag limit and commercial measures that would achieve a 1% reduction to average landings from the previous 10 years. Triggered measures may be removed after a minimum of 3 years if abundance has increased to the point that it no longer triggers management action. The 2020 TLA indicated that indices exceeded the 30% red threshold, and triggered management measures beginning in 2021. Triggered management measures will remain in place until at least 2024 dependent on improved stock status through the TLA.