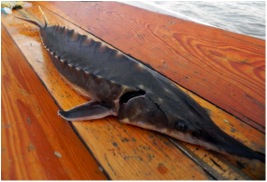 Atlantic sturgeon (Acipenser oxyrhnchus) are ancient fish dating back at least 70 million years, and can be found along the entire Atlantic coast from Florida to Labrador, Canada. They are long-lived (reaching ages up to 70 years) and are anadromous, migrating from the ocean into coastal estuaries and rivers to spawn. Typically, Atlantic sturgeon inhabiting the southern part of  the species range mature faster and grow larger than those in the northern part of the range. Females reach sexual maturity between the ages of 7 and 30, and males between the ages of 5 and 24. The number of eggs that a female produces increases with age and size, which means that older and larger females are more valuable to the population because they produce more eggs (up to 8 million eggs per spawning event) than younger, smaller females (estimated at 400,000 eggs per spawning event).

Most juveniles remain in their natal river from one to six years before migrating back out to the ocean. Little is known about the movements of Atlantic sturgeon when they are at sea. As juveniles, Atlantic sturgeon feed on flies, worms, shrimps, and small mollusks and crustaceans. As adults, they are opportunistic feeders and prey mainly on mollusks, snails, worms, shrimps and benthic fish. Very little is known about their natural predators. 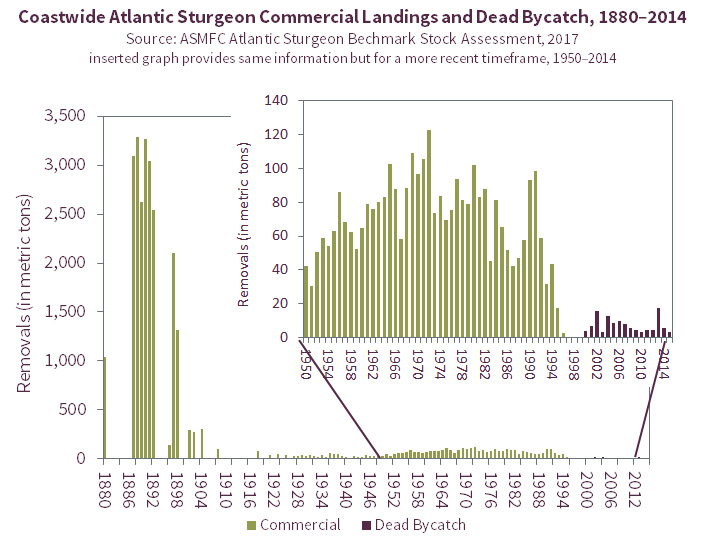 Since colonial times, Atlantic sturgeon have supported commercial fisheries of varying magnitude. In the late 1800s, they were second only to lobster among important fisheries, with landings estimated at seven million pounds per year just prior to the turn of the century. Overharvesting of sturgeon for flesh and eggs (known as caviar) continued through the 1990s until the Commission and federal government implemented a coastwide moratorium in late 1997 and early 1998. Because the population had been severely overfished, the Commission's Fishery Management Plan for Atlantic Sturgeon calls for a coastwide moratorium through at least 2038, in order to build up 20 year classes of spawning females. Several facilities culture Atlantic sturgeon for research purposes.

The 2017 benchmark stock assessment concluded that the resource was depleted coastwide. The “depleted” determination was used instead of “overfished” because of the many factors that contribute to the low abundance of Atlantic sturgeon, including directed and incidental fishing, habitat loss, ship strikes, and climate changes. While overall levels of Atlantic sturgeon remain low, the population appears to be recovering slowly since the implementation of a coastwide moratorium in 1998, and the current mortality level is indicated as sustainable. While Atlantic sturgeon is still considered a “data-poor” species, a tremendous amount of information has been collected on the species since 1998 that improve the abilities of managers and scientists to manage the species. States have invested considerable resources to increase understanding of sturgeon biology and life history. Additionally, bycatch, survey, tagging and genetic data were collected from dozens of state and federal agencies and academic programs along the coast to inform the latest benchmark stock assessment.

The coastwide Atlantic sturgeon population is made up of five distinct population segments (DPSs): (1) Gulf of Maine (GOM), (2) New York Bight, (3) Chesapeake Bay, (4) Carolina and (5) South Atlantic. Very little is known about stock status because reliable data are difficult to obtain; many river systems have few fish and particular stretches of rivers known to support sturgeon are often not easily sampled. However, several states have been conducting long-term monitoring of Atlantic sturgeon through fishery-independent surveys. The 2017 benchmark stock assessment indicates that all DPSs remain depleted, and the Gulf of Maine and Carolina DPSs are experiencing the highest mortality, while abundance in the Gulf of Maine and Chesapeake Bay DPSs is less likely to be at an increased level since the moratorium when compared to the other DPSs.

In 2012 following several status reviews, NOAA Fisheries declared the GOM DPS as threatened and the remaining DPSs as endangered under the Endangered Species Act (ESA). The status review determined the most significant threats to all five DPSs are bycatch mortality, poor water quality, lack of adequate state and federal regulatory mechanisms, and dredging activities. Additional stressors include habitat impediments and ship strikes. In 2013, NOAA Fisheries published an Interim Final Rule for the threatened GOM DPS which essentially provides the same protection as an endangered listing. In April 2017, NOAA Fisheries published a final rule to designate Atlantic sturgeon critical habitat (i.e., specific areas that are considered essential to the conservation of the species) in each of the DPSs.

Atlantic sturgeon are managed in the U.S. through Amendment 1 to the Interstate FMP for Atlantic Sturgeon and its associated Addenda I-IV. The primary goal of the amendment is to achieve stock recovery. Under Amendment 1, each state and jurisdiction “must maintain complete closure, through prohibiting possession of Atlantic sturgeon, and any and all parts thereof including eggs, of any directed fishery for and landings of Atlantic Sturgeon until the fishery management plan is modified to reopen fishing in that jurisdiction.” Exceptions to the moratorium on possession were approved via Technical Addendum #1 (2000) for the purposes of scientific research and educational display. The Amendment also addresses Atlantic sturgeon mortality associated with bycatch from other fisheries.