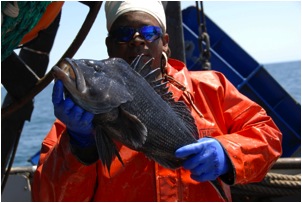 Scientist aboard the NEAMAP SNE/MA Nearshore Trawl Survey with a dominant, male black sea bass as evidenced by the nuchal hump right at the top of its head before its dorsal fin. Photo credit: NEAMAP.

Black sea bass are protogynous hermaphrodites, which mean they start life as a female and then change sex to become males when they reach 9-13 inches (2 - 5 years of age). Thirty-eight percent of females in the Mid-Atlantic demonstrate sex reversal between August and April, after most fish have spawned. Even though some fish are males when they reach sexual maturity, most produce eggs when they first mature. Following transition, a sea bass will either become a dominant male, characterized by a larger size and a bright blue nuchal hump during spawning season (see accompanying photo), or a subordinate male that has few distinguishing features. 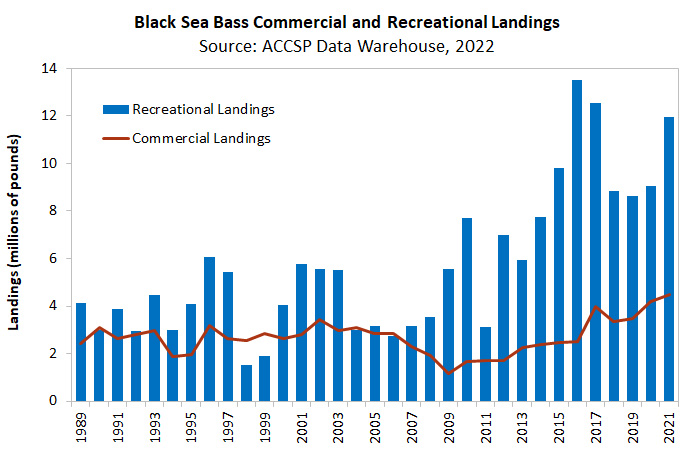 Black sea bass are highly sought by both commercial and recreational fishermen throughout the Mid-Atlantic. Fisheries change seasonally with changes in fish distribution. Inshore and more southern commercial fisheries primarily use fish pots and handlines, and when fish move offshore in the winter, they are primarily caught in trawl fisheries targeting summer flounder, scup, and Loligo squid. Recreational fisheries generally occur during the period that sea bass are inshore (May to September), but season duration varies among the states. Since the fishery management plan’s approval in 1997, the black sea bass commercial fishery has operated under a quota. The recreational fishery is restricted by a coastwide recreational harvest limit. 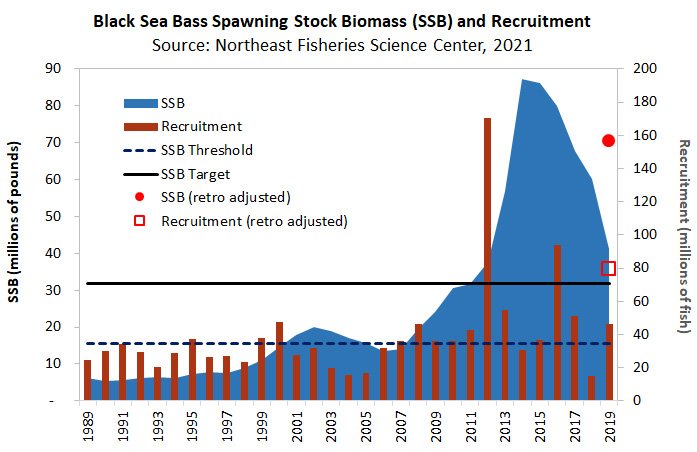 An operational assessment that incorporated new recreational harvest estimates was peer reviewed in July 2021. The assessment found that the black sea bass stock north of Cape Hatteras, North Carolina was not overfished and overfishing was not occurring in 2019 relative to revised reference points.

Starting in 2007, spawning stock biomass (SSB) increased rapidly and reached a peak in 2014 at over 76 million lbs., then decreased slightly. In 2019 SSB was estimated at 65.63 million pounds, 2.1 times the updated biomass target of 31.84 million lbs. The average fishing mortality in 2019 was 0.39, 85% of the updated fishing mortality threshold of 0.46. To account for the fact that black sea bass are protogynous hermaphrodites, which change sex from female to male, the assessment defined SSB as the total of male and female mature biomass to adjust for changes in sex ratio.

Black sea bass is managed jointly by the Atlantic States Marine Fisheries Commission and the Mid-Atlantic Fishery Management Council (Council) under Amendment 13 to the Summer Flounder, Scup and Black Sea Bass Fishery Management Plan (August 2002) and its subsequent addenda (Addenda XII-XXXII). The objectives of the FMP are to reduce fishing mortality to assure overfishing does not occur, reduce fishing mortality on immature black sea bass to increase spawning stock biomass, improve yield from the fishery, promote compatible regulations among states and between federal and state jurisdictions, promote uniform and effective enforcement, and minimize regulations necessary to achieve the stated objectives.

The recreational fishery is currently managed on a regional basis using a combination of minimum size limits, bag limits and fishing seasons to achieve a regional allocation of the recreational harvest limit (RHL). The coastwide commercial quota is divided among the states annually. Specific management measures for the commercial fishery are set by each state, which may include 1) minimum size limits, 2) minimum mesh requirements for trawls or 3) a moratorium on entry into the fishery and closed seasons.

Addendum XXXII establishes an annual specifications process for developing recreational management measures. The Board will approve regional measures in early spring each year, based on technical committee analysis of stock status, resource availability, and harvest estimates. Public input on specifications will be gathered by states through their individual public comment processes. The specifications process will provide the Board more flexibility in adjusting measures, if necessary, to constrain harvest to the annual coastwide recreational harvest limit (RHL). Further, the process will enable the Board to consider a host of factors, including: regional equity; regulatory stability; species abundance and distribution; and late-breaking recreational harvest estimates.

In June 2021, the Board and MAFMC jointly approved final changes to the management program for black sea bass commercial fisheries. These changes include modifying the state allocations of the commercial black sea bass quota, adding the state allocations to the MAFMC's Fishery Management Plan (FMP), and modifying the regulations for federal in-season closures. The Board adopted the new allocations through Addendum XXXIII to the Summer Flounder, Scup and Black Sea Bass FMP, while the Council recommended these changes through an amendment to its FMP. These actions address significant changes in the distribution of black sea bass that have occurred since the original allocations were implemented under Amendment 13 in 2003 and also account for the historical dependence of the states on the black sea bass fishery.

In December 2021, the Board and the Council took final action on a joint amendment to reevaluate the FMP’s commercial and recreational allocations. This action aimed to address the allocation-related impacts of the revised recreational catch and landings data provided by MRIP. The changes are expected to be effective January 1, 2023.

The Policy Board and MAFMC acknowledged this approach will not solve all recreational fisheries management challenges. With this in mind, they agreed to continue refinement of the Percent Change Approach as well as two other options considered within the Draft Framework/Addenda, with particular emphasis on using improved statistical models to develop measures. Use of the approved Percent Change Approach will sunset no later than the end of 2025 with a goal of implementing a new and improved approach to managing the recreational fisheries by the beginning of 2026.