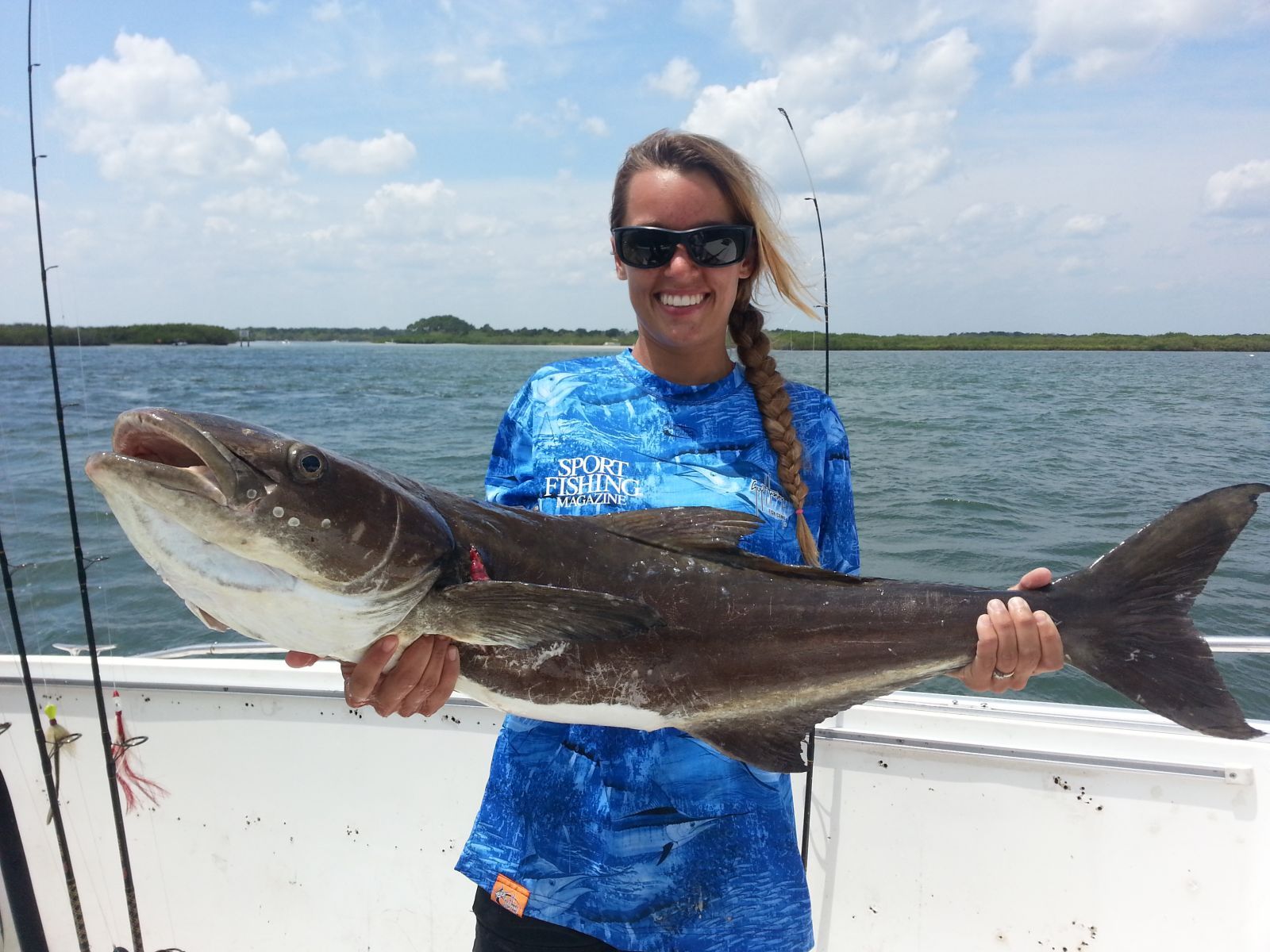 Cobia (Rachycentron canadum) are distributed worldwide in tropical and warm-temperature waters. They occur along the Atlantic coast from Nova Scotia to Argentina, and are most abundant in US waters from Chesapeake Bay south through the Gulf of Mexico. Two stocks are recognized in US waters, one along the Atlantic coast from Georgia north (Atlantic cobia) and the other along the east coast of Florida through the Gulf of Mexico. This stock definition was concluded through the Southeast Data, Assessment, and Review (SEDAR) 58 Stock Identification Process. Stock structure continues to be investigated through ongoing tagging studies to further identify and describe potential subcomponents of these populations.

Cobia typically reach sexual maturity by 3 years (generally 2.5 feet long, fork length), with males maturing earlier than females. Females grow to be larger than males, and may reach 6 feet and weigh up to 100 pounds. On the US Atlantic coast, cobia move into nearshore waters when water temperatures reach 20-25°C (68-77°F). While aggregated inshore, they spawn over a period of 4-6 weeks. Spawning is localized, with at least 2 genetically distinct spawning aggregations occurring within the Atlantic stock, one in Virginia and the other in South Carolina. The timing of local spawning progresses up the coast as temperatures warm, with peak spawning in May for South Carolina, June for North Carolina, and July for Virginia. Cobia are batch spawners, meaning a female may spawn several times (about every 4 to 6 days) during the spawning season.

Cobia make seasonal migrations, wintering in the south or offshore and moving north and inshore during the summer months. They are drawn to structure to feed and find shelter from predation. Juveniles and adults are often found around live bottom, wrecks, and buoys, as well as flotsam and seaweed mats. Their diet consists primarily of fish and crustaceans. 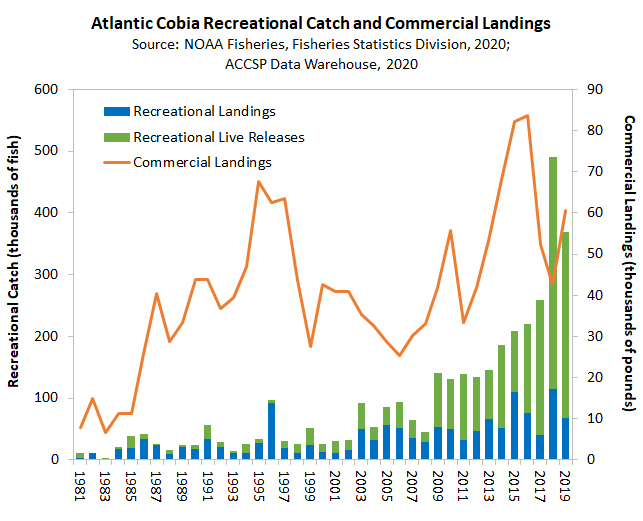 Enthusiastically pursued by recreational anglers, Atlantic cobia support an important recreational fishery throughout the South Atlantic and into the Mid-Atlantic region. Primary methods include bottom fishing with natural bait as well as sight-casting, which has gained popularity in recent years. The annual recreational harvest of Atlantic cobia, found along the US Atlantic coast from New York to Georgia, has varied widely with little trend since 2003, ranging from 880,000 to 3.6 million pounds. Landings have increased over the past two years. In 2018 and 2019, recreational anglers landed approximately 3.1 million and 1.9 million pounds of Atlantic cobia, respectively. Landings in 2018 were the second highest value in the time series, which extends back to 1981. High landings, however, have resulted in federal fishery closures in the past several years.

The commercial fishery is on a much smaller scale, but has remained fairly steady from 2015 to 2019. Primarily a bycatch fishery, it is has been associated with the snapper/grouper hook and line fishery and troll fisheries for many South Atlantic species, although more directed fisheries have recently developed in some areas. Commercial restrictions are consistent throughout the range, with a 2 fish per person possession limit, 6 fish vessel limit, and a 33” fork length minimum size limit. The two greatest commercial harvests in the time series, which extends back to 1950, occurred in 2015 (83,000 pounds) and 2016 (84,000 pounds). 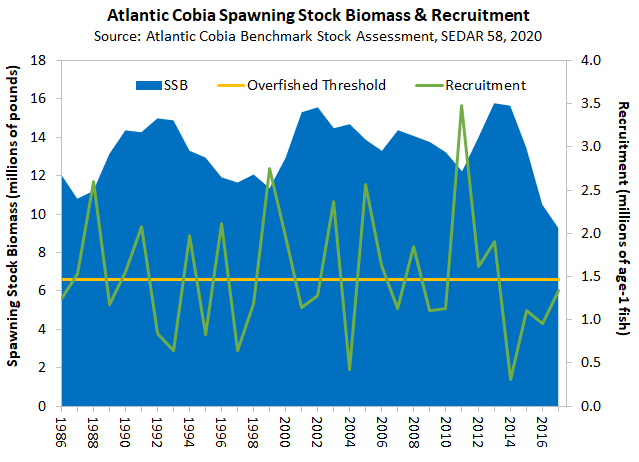 Two cobia stocks are found off the U.S. Atlantic coast: Atlantic cobia and Gulf of Mexico Migratory Group (Gulf cobia). Gulf cobia occur throughout the Gulf of Mexico and extend to Florida’s east coast, while Atlantic cobia occur from Georgia north. These stock boundaries were confirmed in a 2018 Stock Identification Workshop, but stock structure continues to be investigated through ongoing tagging and genetic studies to further identify and describe potential subcomponents of these populations.

The 2020 Atlantic Cobia Benchmark Stock Assessment found the stock is not overfished nor experiencing overfishing. Stock status was determined by comparing spawning stock biomass (SSB) and fishing mortality rate (F) to reference point values based on F40%, or the fishing mortality rate that results in 40% of the stock’s maximum reproductive potential in the absence of fishing.

Atlantic cobia biomass has shown a pattern of rapid increase in strong recruitment years followed by years of decline. These strong year classes have maintained the stock above the overfished threshold through subsequent periods of biomass decline since the 1980s. Data from the assessment identified several of these notably strong year classes, the most recent of which occurred in 2010.

The harvest specification outlined in the Amendment allows the Coastal Pelgaics Board to specify a limited set of management measures for up to 3 years. One of the measures that may be set through this process is a coastwide harvest quota for both recreational and commercial fisheries. Percent allocations are based on states’ percentages of coastwide historical landings in numbers of fish, derived as 50% of the 10-year average landings from 2006-2015 and 50% of the 5-year average landings from 2011-2015.

In 2019, in response to concerns regarding recreational and commercial sector quota allocations, the Board initiated Addendum I. Approved for management use in October 2020, the Addendum modifies the allocation of the resource between the commercial and recreational sectors, updates the methodology to calculate the commercial trigger for in-season closures, and adjusts commercial and recreational de minimis measures. The current management program manages the recreational fishery with a 1 fish bag limit and a minimum size limit of 36” fork length or 40” total length. Season restrictions and vessel limits are determined by individual states, but may not exceed 6 fish per vessel. Recreational harvest of state-specific allocations are evaluated over three-year time periods, and, if states exceed their soft harvest targets, states must adjust management measures to achieve the soft harvest target in the subsequent three-year period. The coastwide recreational harvest target for 2021-2023 fishing seasons is 76,908 fish and results in the following state-specific soft targets: