Jonah crab (Cancer borealis) are distributed in the waters of the Northwest Atlantic Ocean primarily from Newfoundland, Canada to Florida. The life cycle of Jonah crab is poorly described and what is known is largely compiled from a patchwork of studies. Female crab are believed to move nearshore during the late spring and summer and then return offshore in the fall and winter. The reasons for this inshore migration are unknown, but maturation, spawning and molting have all been postulated. Due to the lack of a widespread and well-developed aging method for crustaceans, the age and growth of Jonah crab is poorly described. It is theorized that the size of maturity for Jonah crab in U.S. waters is between 4” and 5” based off of studies on the Scotian Shelf and Virginia. Like other Cancer crab species, Jonah crab consume a variety of prey including snails, arthropods, algae, mussels and polychaetes. 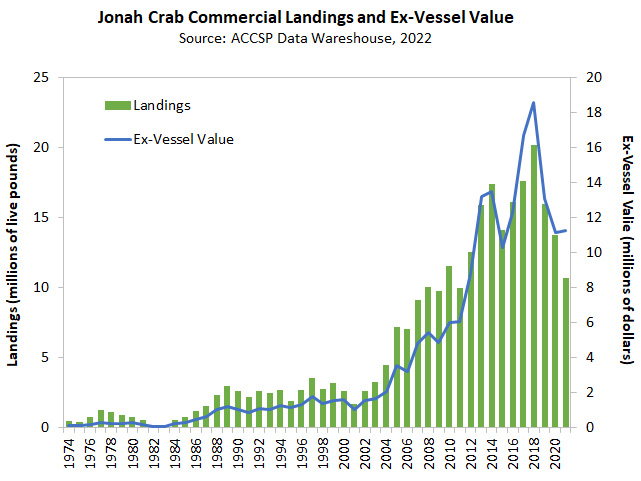 While once considered bycatch in the lobster fishery, Jonah crab has experienced a rapid increase in landings and value over the last 15 years. Since the early 2000s, landings have increased by 650%, with over 17 million pounds landed in 2014. The rapid increase in landings can be attributed to a number of factors, including a decrease in the abundance of Southern New England lobsters, causing fishermen to supplement their income with Jonah crab, and an increase in the price of other crab (such as Dungeness), creating a substitute market for Jonah crab. Landings predominately come from Massachusetts (~70%) and Rhode Island (~25%) with the vast majority of Jonah crabs caught in traps and pots. There is a small but historic claw fishery off the Delmarva Peninsula (Delaware/Maryland and Virginia) which constitutes less than 1% of the total Jonah crab fishery. Commercial landings in 2020 were 13.7 million pounds.The magnitude of recreational landings is unknown, but is expected to be minimal.

The status of the Jonah crab fishery in federal or state waters is relatively unknown. There is no range wide stock assessment for Jonah crab. Massachusetts, Maine, and New Hampshire conduct inshore state water trawl surveys but they provide minimal data because they are primarily focused on fish and encounter Jonah crab species infrequently. NOAA Fisheries conducts a trawl survey in federal waters which collects data on Cancer crab abundance and distribution, distinguished by species; however, this data has not yet been analyzed. Inferred high amounts of undocumented catch, along with inconsistencies in reported landings, make abundance difficult to estimate. A benchmark stock assessment is scheduled for completion in 2023. 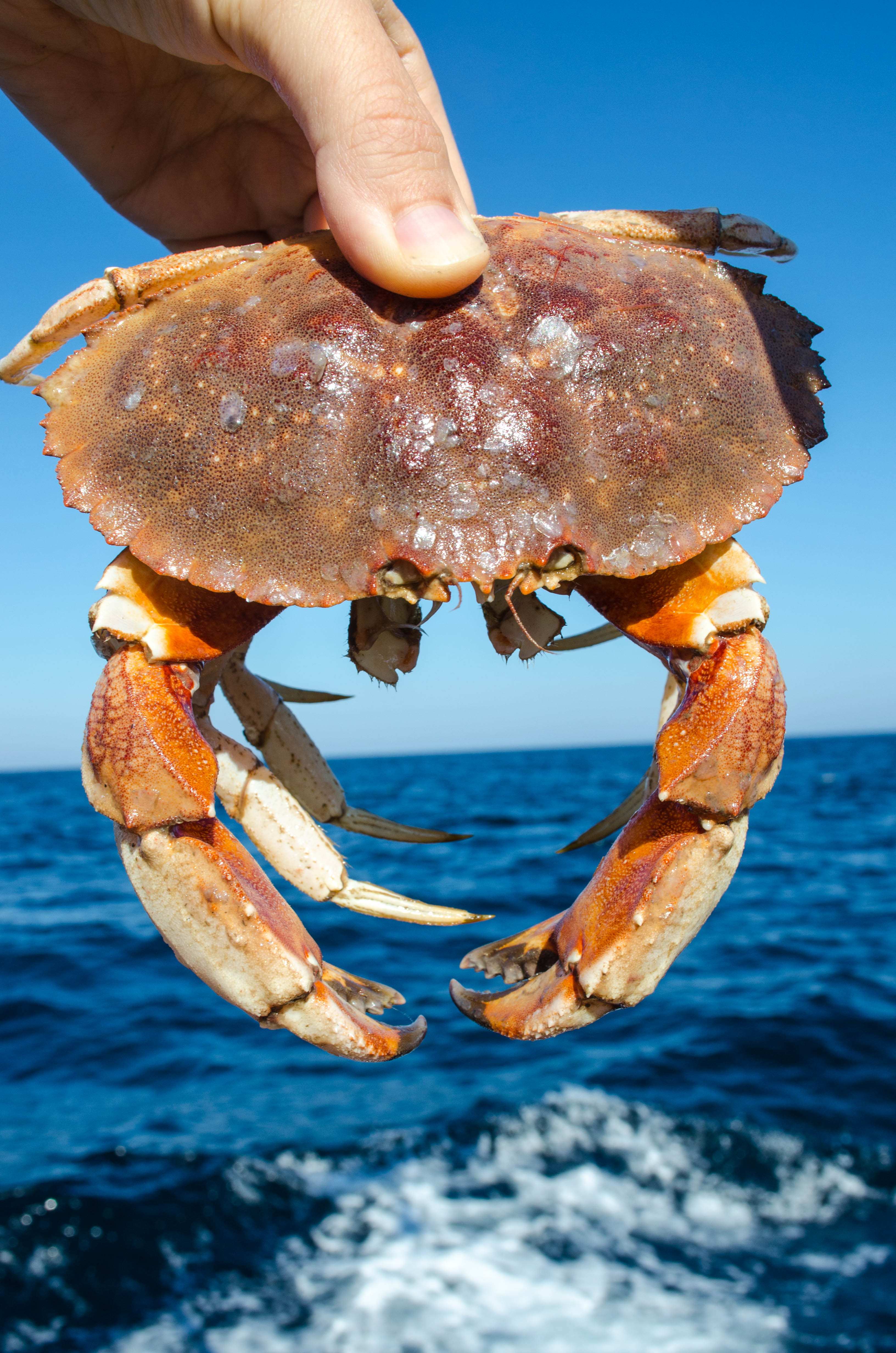 Jonah crab is managed under the Interstate Fishery Management Plan (FMP) for Jonah Crab (2015) and its two addenda. The FMP’s goal is to promote conservation, reduce the possibility of recruitment failure, and allow full utilization of the resource by the industry. The plan lays out specific management measures in the commercial fishery, including a 4.75” minimum size with zero tolerance and a prohibition on the retention of egg-bearing females. In the recreational fishery, the FMP sets a possession limit of 50 whole crabs per person per day. Due to the lack of data on the Jonah crab fishery, the FMP implements fishery-dependent data collection.

Addendum I (May 2016), establishes a bycatch limit of 1,000 crabs per trip for non‐trap gear (e.g., otter trawls, gillnets) and non‐lobster trap gear (e.g., fish, crab, and whelk pots). In doing so, the Addendum caps incidental landings of Jonah crab across all non‐directed gear types with a uniform bycatch allowance.

Addendum II (February 2017) establishes a coastwide standard for claw harvest to respond to concerns regarding the equity of the claw provision established in the FMP.  Specifically, the Addendum allows Jonah crab fishermen to detach and harvest claws at sea, with a required minimum claw length of 2.75” if the volume of claws landed is greater than five gallons. Claw landings less than five gallons do not have to meet the minimum claw length standard. Fishermen may also harvest whole crabs which meet the 4.75” minimum carapace width. Addendum II also establishes a definition of bycatch based on a percent composition of catch in order to minimize the expansion of a small-scale fishery under the bycatch allowance. Through Addendum II, fishermen harvesting under the bycatch limit must have another species on board of greater weight than landed Jonah crabs.

In February 2018, the Board approved Addendum III to the FMP. The Addendum addresses concerns regarding deficits in existing reporting requirements by expanding the mandatory harvester reporting data elements, improving the spatial resolution of harvester data, establishing a 5-year timeline for implementation of 100% harvester reporting, and prioritizing the development of electronic harvester reporting. In addition, the Addendum improve biological sampling requirements by establishing a baseline of ten sampling trips per year in the American lobster/Jonah crab fishery, and encourages states with more than 10% of coastwide landings in either the lobster or Jonah crab fisheries to conduct additional sampling trips.

In March 2022, the Board approved Addendum IV, which expands on the Addendum III reporting improvements by establishing electronic tracking requirements for federally-permitted vessels in the American lobster and Jonah crab fisheries. Specifically, electronic tracking devices will be required for vessels with commercial trap gear area permits for Lobster Conservation Management Areas (LCMAs) 1, 2, 3, 4, 5, and Outer Cape Cod to collect high resolution spatial and temporal effort data. Through this action the Board seeks to enhance data for the stock assessment, identify areas where fishing effort might present a risk to endangered North Atlantic right whales, and document the footprint of the fishery to help reduce spatial conflicts with other ocean uses like wind energy development and aquaculture.