The historic distribution of red drum (Sciaenops ocellatus) on the Atlantic coast is from Massachusetts through Florida, though few fish have been reported north of the Chesapeake Bay in recent years. Juveniles are most abundant in estuarine waters and inlets, while fish older than age four inhabit deeper waters. The adult fish migrate seasonally, moving offshore or south in the winter and inshore or north in the spring. Spawning occurs at night in the nearshore waters during the summer and fall. Prolific spawners, large females may produce up to two million eggs in a season. Eggs hatch within 24 to 36 hours of being spawned, and the larvae are carried by wind and tidal action into shallow, low salinity estuarine nursery areas. Juveniles and sub-adults stay in estuarine areas feeding on zooplankton and invertebrates such as small crabs and shrimp. Gradually, red drum expand their diet to include fish and larger invertebrates. Depending on the area, males mature between age one and four (20-28 inches in length), while females mature between age three and six (31-36 inches in length). Red drum may reach 60 years of age and 60 inches in length (corresponding to greater than 90 pounds in weight). 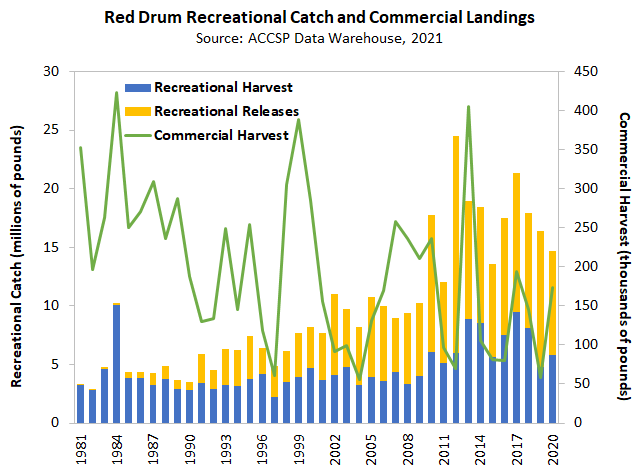 Red drum are one of the most recreationally sought-after fish throughout the South Atlantic, with the majority of Southern states reserving red drum harvest strictly for recreational anglers. Red drum are divided into two management areas or stocks along the Atlantic coast, a northern stock (from New Jersey to North Carolina) and a southern stock (from South Carolina to Florida). The stock units are based on differences in life history traits between the two stocks (such as growth rates and maximum observed ages) and information from genetic and tagging studies indicating red drum rarely move between the two regions.

Red drum landings from New Jersey through the east coast of Florida in 2020 are estimated at 6 million pounds. In 2020, 56% of the total landings came from the southern region where the fishery is exclusively recreational, and 44% from the northern region. These shifts are a significant change from the 2019 regional landings split, which were 20% from the northern region and 80% from the southern region. Juveniles are most abundant in estuarine waters and inlets, while fish older than age four inhabit deeper waters. As a result, the fishery is primarily nearshore with small red drum targeted in shallow waters and large trophy fish targeted along the Mid- and South Atlantic barrier islands.

The commercial fishery, which targets only the northern stock, is largely dominated by North Carolina, landed 174,000 pounds in 2020. This is a 199% increase in commercial landings from 2019; it is important to note that 2019 landings were the lowest commercial landings on record since 2004. Commercial red drum were also landed in Maryland and Virginia, but represent only 5% of the total landings. 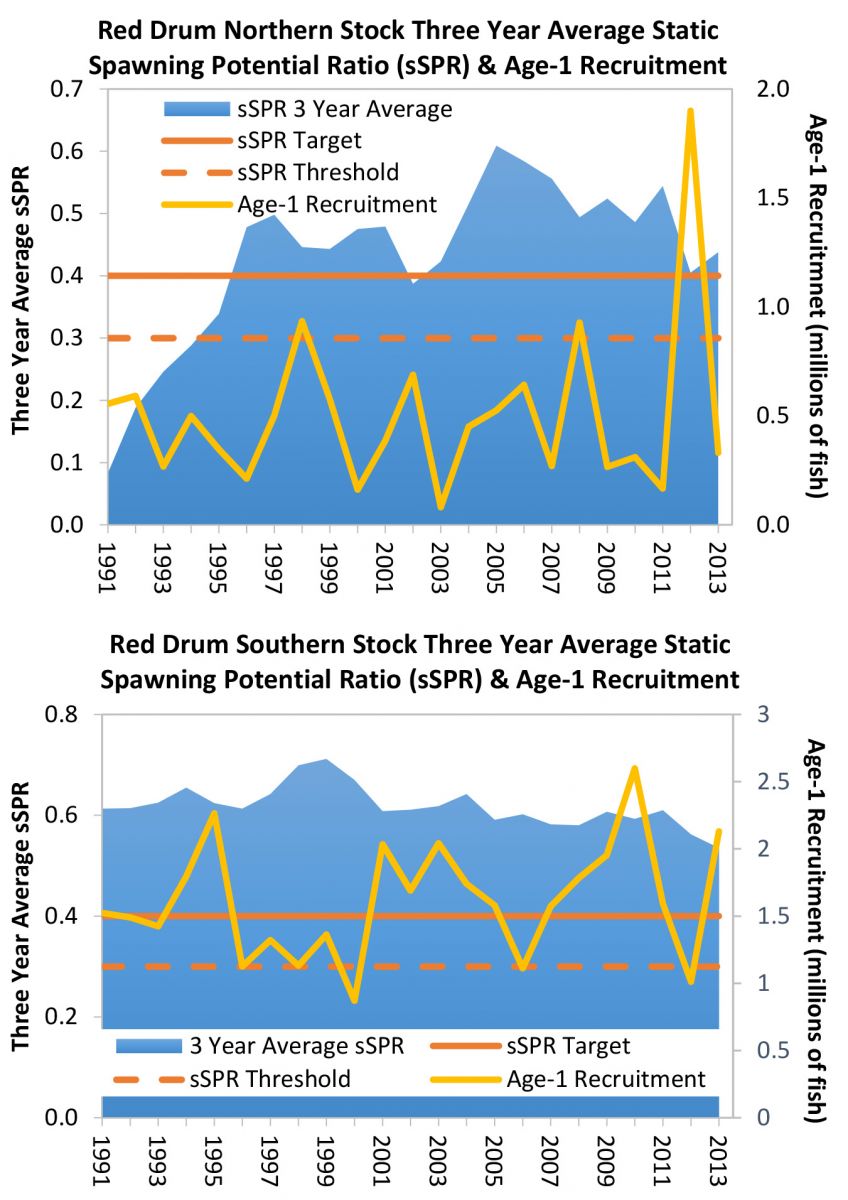 The 2017 Red Drum Stock Assessment and Peer Review Report indicate overfishing is not occurring for red drum for either the northern or southern stocks. The assessment was unable to determine an overfished/not overfished status because population abundance could not be reliably estimated due to limited data for the older fish (ages 4+) that are not typically harvested due to the current fishery measures (slot-limits).  The Board accepted the stock assessment and peer review report for management use. No management action was taken at this time since overfishing is not occurring.

The assessment estimates annual static spawning potential ratios (sSPR) measured against previously established reference points for red drum. Overfishing is occurring if the three-year average sSPR is less than a threshold of 30%, with a management target of 40% sSPR. sSPR is a measure of spawning stock biomass survival rates when fished at the current years’ fishing mortality rate relative to the spawning stock biomass survival rates if no fishing mortality was occurring. In 2013 (the last year for which data were available), the three-year (2011-2013) average sSPR was 43.8% for the northern stock and 53.5% for the southern stock, both above the target and threshold values.

Red drum are managed by the Commission through Amendment 2 to the Interstate FMP and Addendum I. The Amendment requires states to implement recreational creel and size limits to achieve the fishing mortality target, including a maximum size limit of 27 inches, and maintain existing commercial regulations. A harvest moratorium and Presidential Executive Order, enacted in 2007, prevents any harvest or sale of red drum from federal waters.

Addendum I (2013) seeks to increase our knowledge base and aid in the protection of important red drum habitat. It updates Amendment 2’s habitat section to include current information on red drum spawning habitat and habitat by life stage (egg, larval, juvenile, sub-adult, and adult). It also identifies and describes the distribution of key habitats and habitats of concern, including threats, habitat bottlenecks (habitat or habitat characteristics that limit the sustainability or recovery of red drum), and ecosystem considerations.

In March 2017, a report on Sciaenid Fish Habitat was released including information on habitat for several species, including red drum, during all stages of their lives, their associated Essential Fish Habitats and Habitat Areas of Particular Concern, threats and uncertainties to their habitats, and recommendations for habitat management and research. This report is meant to be a resource when amending FMPs in the future for these species.