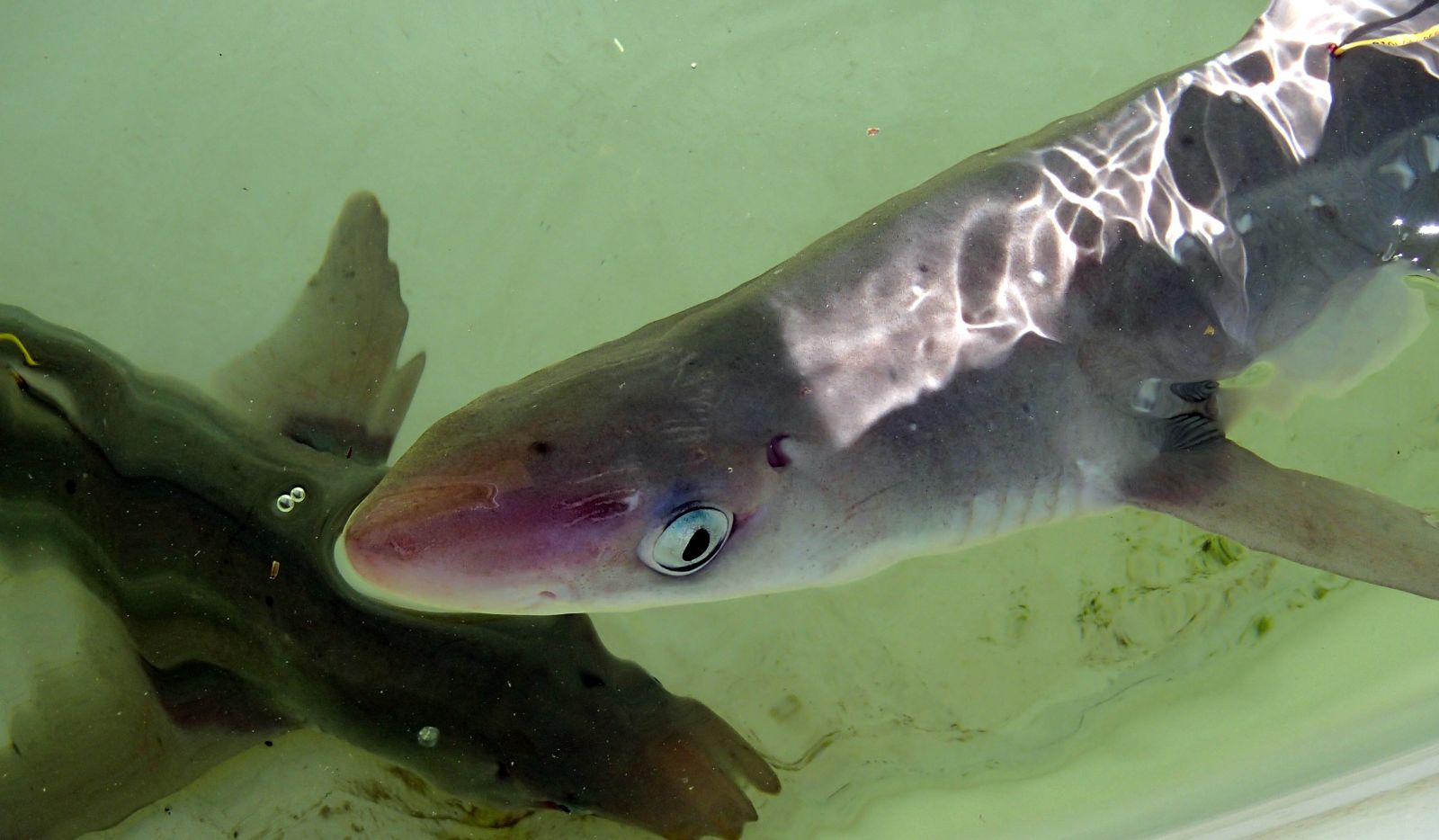 Spiny dogfish (Squalus acanthias) are a small shark species that inhabit both sides of the North Atlantic and North Pacific Oceans, mostly in the temperate and subarctic areas. In the Northwest Atlantic, the stock ranges from Labrador to Florida, and is most abundant from Nova Scotia to Cape Hatteras. Spiny dogfish migrate north in the spring and summer and south in the fall and winter. In the winter and spring, they congregate primarily in Mid-Atlantic waters but also extend onto the shelf break of southern Georges Bank. In the summer, they are located farther north in Canadian waters and move inshore into bays and estuaries. By autumn, dogfish have migrated north with high concentrations in Southern New England, on Georges Bank, and in the Gulf of Maine. They remain in northern waters throughout autumn until water temperatures begin to cool and then return to the Mid-Atlantic.

Juvenile spiny dogfish school by size until sexually mature and then aggregate by both size and sex. Female dogfish reach sexual maturity at 12 years (~29.5 inches), while males reach sexual maturity at six years (~23.6 inches). Mating occurs in the winter months and the pups are delivered on the offshore wintering grounds. Females give birth every two years with litters ranging from two to 15 pups. While carrying one litter, the female will begin developing eggs for the fertilization of her next litter. After an 18 to 24 month gestation period, pups are born at an average size of 14 inches. 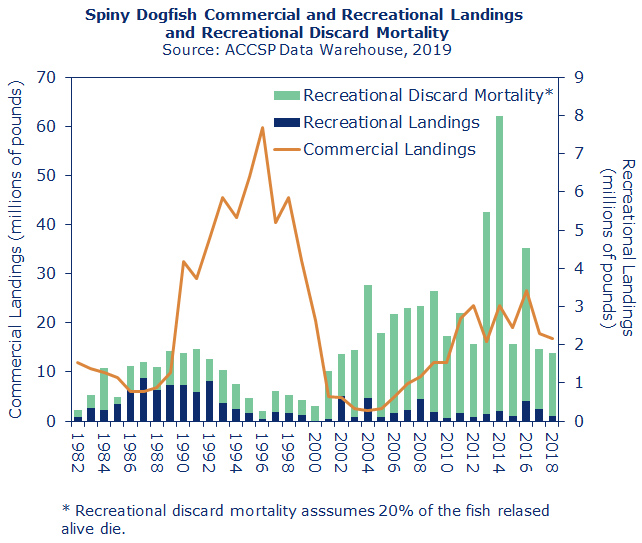 Prior to the Fishery Conservation and Management Act of 1976 (now known as the Magnuson-Stevens Reauthorization Act), foreign fleets caught the majority of dogfish in U.S. waters but U.S. fishermen have had uncontested access ever since the Act's passage. The National Marine Fisheries Service (NMFS) encouraged commercial fishermen to target the bountiful stocks of spiny dogfish in the 1980s and 1990s when stocks of other commercially valuable fish in the Northeast declined. Then in 1998, NMFS determined that spiny dogfish were overfished and implemented stringent harvest restrictions in federal waters to allow the stock to rebound. The states followed shortly after with complementary regulations for state waters. Today, commercial fishermen catch spiny dogfish using longlines, trawls, and purse seines. Fishermen target female dogfish because the females grow larger than males and tend to school together. Processors prefer the larger dogfish because they are easier to hold and cut. The commercial fishery supplies European food fish markets that use dogfish "belly flaps" for fish and chips in England and as a popular beer garden snack called shillerlocken in Germany.

There is also a small scientific fishery in Maine, which uses spiny dogfish to study several of the species' unique biological characteristics. Scientists are studying the salt gland of Dogfish to better understand the function of human kidneys. They also secrete a molecule called squalamine, which has strong antibiotic characteristics and shows promise as an anticancer agent.

In 2020, commercial landings were estimated at 16.7 million pounds, while recreational harvest was estimated at 249,958 pounds. Discards have remained around 11 million pounds over the past decade and have declined in recent years. Canadian and foreign landings have also decreased significantly in recent years. It is anticipated that the Canadian dogfish harvest will not increase in the near future given the lack of demand for the product and the subsequent closure of Canadian spiny dogfish processors. 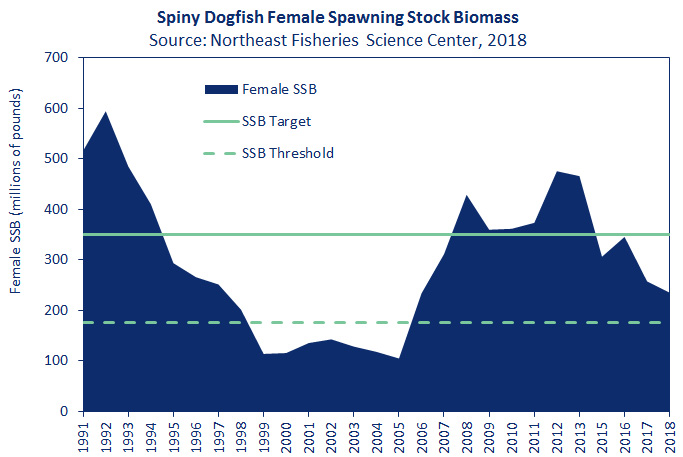 The 2018 Stock Assessment Update indicates the population is not overfished nor experiencing overfishing. The spawning stock biomass estimate of 235 million pounds is slightly above the SSB threshold of 175 million pounds, while the fishing mortality estimate (0.202) is just below the fishing mortality threshold (0.2439). Despite remaining above the threshold, biomass has declined in recent years, requiring a significant reduction in 2019-2020 to ensure that overfishing does not occur.

The next benchmark stock assessment is currently scheduled for completion in late 2022.

In 1998, NMFS declared spiny dogfish overfished and initiated the development of a joint fishery management plan (FMP) between MAFMC and the New England Fishery Management Council (NEFMC) in 1999. The Commission approved an Interstate FMP to complement the federal plan in 2003. Both the Commission and federal plans use a fishing mortality rate to set annual quotas and trip limits. The Commission's FMP has an additional five addenda (Addenda I - V).

The spiny dogfish fishery, which operates from May 1 through April 30, is managed though an annual commercial quota, which is further allocated by state shares. Maine through Connecticut receive 58% of the quota and are limited by a maximum possession limit of 6,000 pounds per day. The southern state shares are allocated as follows: New York (2.7%); New Jersey (7.6%); Delaware (0.9%); Maryland (5.9%); Virginia (10.8%); and North Carolina (14.0%). Any overages from the previous fishing seasons are paid back by the region or state in the following season.

In October 2019, the Board approved Addendum VI to the FMP, which allows commercial quota to be transferred between all regions and states to enable the full utilization of the coastwide commercial quota and avoid quota payback for unintended quota overages. Previously, the FMP only allowed quota transfers between states with individual allocations, with regions excluded from benefitting from quota transfers. Moving forward, in order for states within a region to participate in quota transfers, the Director of each state’s marine fisheries agency within the region must agree to the transfer in writing. As with transfers between states, transfers involving regions do not permanently affect the shares of the coastwide quota. Additionally, the Addendum extends the timeframe for when quota transfers can occur up to 45 days after the end of the fishing year to allow for late reporting of landings data.

In October 2020, the Board approved a commercial quota of 29.6 million pounds for the 2021/2022 and 2022/2023 fishing years. Although the Board had previously set multi-year specifications for 2019-2021, in December 2019 the MAFMC approved a new Risk Policy with the intent that 2021/2022 specifications would be revised to reflect the new policy. As such, the MAFMC’s Scientific and Statistical Committee (SSC) recommended increasing the acceptable biological catch (ABC) for 2021 from 35.4 million pounds to 38.6 million pounds. Based on this revised ABC recommendation, the Board’s approved commercial quota is consistent with the MAFMC and NEFMC approved commercial quota of 29,559,580 pounds, which is an 8% increase compared to the previously set 2021/2022 quota. The specifications were also extended to the 2022 fishing year to align with the timing of the 2022 research track assessment.