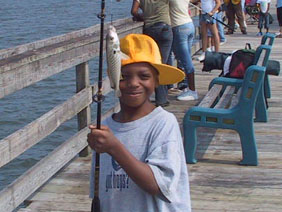 Spot (Leiostomus xanthurus) occur along the U.S. Atlantic coast in estuarine and coastal waters from the Gulf of Maine to Florida, although they are most abundant from the Chesapeake Bay to South Carolina. Spot migrate seasonally, entering bays and estuaries in the spring where they remain until late summer or fall when they move offshore to spawn. Spot mature between the ages of two and three, at lengths of seven to eight inches. Their maximum life span is about six years, although fish older than four years are uncommon.

Spawning takes place in the ocean from fall to early spring and the post-larvae move into estuaries, utilizing low salinity tidal creeks where they develop into juveniles. As spot grow, they move toward higher salinity areas during the summer and early fall and offshore in the fall as water temperatures decrease. Those that summered in the northern portion of their range also move south in the autumn. Spot are opportunistic bottom feeders, eating mainly worms, small crustaceans and mollusks, and organic material. The post-larvae prey on plankton but become bottom feeders as juveniles or adults. Predators such as striped bass, weakfish, summer flounder, bluefish, and sharks eat them in turn. 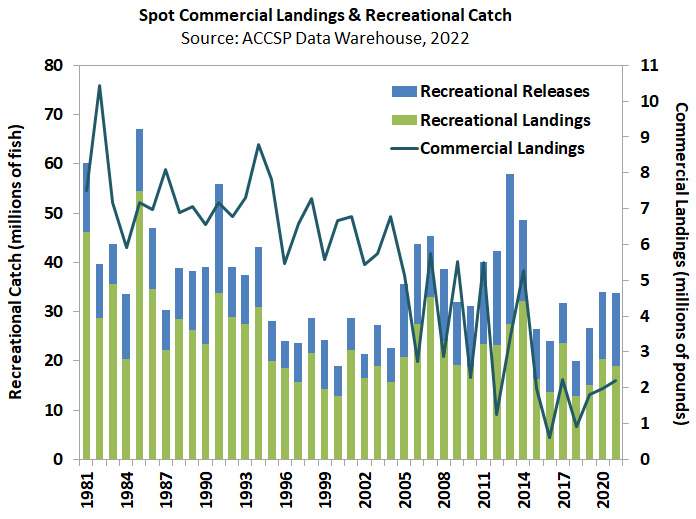 Spot provide important recreational and commercial fisheries in the South Atlantic, although year-to-year fluctuations in landings are common. This is because spot are short-lived and the catch in most years consists of a single year-class, the strength of which is variable (partly due to environmental conditions prevalent in the spawning and nursery areas).

In 2017, the first coastwide benchmark stock assessment was completed for spot. The assessment used a catch survey model to estimate population parameters (e.g., stock status, natural mortality, discard rates, and mortality) and biological reference points. However, due to conflicting trends in abundance and harvest, as well as other uncertainties, this assessment was not recommended to be used for management advice. There is a new benchmark stock assessment underway, scheduled to be completed in 2024.

Established under Addendum II, a traffic light approach (TLA) is typically conducted each year to evaluate fishery trends and develop management actions, if necessary. The name comes from assigning a color (red, yellow or green) to categorize relative levels of indicators that reflect the condition of the fish population (abundance metric) or fishery (harvest metric). For example, as harvest increases relative to the long-term mean, the proportion of green in a given year increases, and as harvest decreases, the amount of red in that year becomes more predominant. The TLA improves the management approach as it illustrates long-term trends in the stock and includes specific management recommendations in response to declines in the stock or fishery.

Recent TLA runs showed conflicting trends, with significant decreases in commercial harvest and juvenile abundance, slight decreases in harvest from the recreational sector, and slight increases in adult abundance. Based on these conflicting trends, the Technical Committee evaluated the TLA and recommended several adjustments, including incorporation of additional abundance surveys, application of age-length keys and length compositions to all abundance surveys to better estimate the number of adults, use of regional rather than coastwide metrics, a new reference time period, and a new triggering mechanism. These changes were incorporated into Addendum III, which the Board approved in February 2020.

In October 2020, the TLA was presented to the Board using the new methodology outlined in Addendum III. The results triggered management action due to significant declines in harvest in both the Mid-Atlantic (north of Virginia-North Carolina border) and South Atlantic (North Carolina to Florida) regions, and adult abundance in the Mid-Atlantic region in recent years. The TLA was above 30% in 2 of the last 3 years, triggering a moderate management response. Addendum III outlines this management response in only non-de minimis states, and these states were required to implement a 50 fish per person per day bag limit and a 1% reduction in commercial harvest from their 10-year average. Addendum III states these management measures must be in place for at least two years, before being reevaluated based on adult abundance metrics.

In the most recent TLA, presented in August of 2022, adult abundance status was unknown in both the Mid-Atlantic and South Atlantic. This is due to fishery independent survey data unavailability. The Spot Technical Committee recommended maintaining current management measures until 2023 when all fishery independent survey data are expected to be available again, and the spot TLA can be reevaluated.

Spot is one of the 275 sciaenid species worldwide. The Commission manages six sciaenid species, which are commonly called drums, croakers, or hardheads for the repetitive throbbing or drumming sounds they produce. Spot is managed under the Omnibus Amendment for Spot, Spotted Seatrout, and Spanish Mackerel (2011) and Addendum I (2014). The Omnibus Amendment updates all three species plans with requirements of the Commission's ISFMP Charter. As discussed above Addendum I establishes use of a Traffic Light Analysis to evaluate the status of the fisheries and potential coastwide or state-specified management actions (e.g. bag limits, size restrictions, time & area closures, and gear restrictions) based on the annual fisheries evaluation. The TLA has been used as a precautionary framework for fisheries with limited data to allow for a reasonable level of resource management.

In March 2017, a report on Sciaenid Fish Habitat was released including information on habitat for several species, including spot, during all stages of their lives, their associated Essential Fish Habitats and Habitat Areas of Particular Concern, threats and uncertainties to their habitats, and recommendations for habitat management and research. This report is meant to be a resource when amending FMPs in the future for these species.