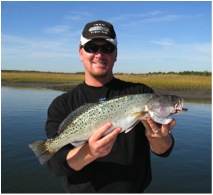 On the Atlantic coast, spotted seatrout (Cynoscion nebulosus) occur from Cape Cod, Massachusetts to the Florida Keys, but are most abundant from the Chesapeake Bay southward. They are found primarily in estuaries, but move into nearshore ocean waters during cold periods. In general, spotted seatrout appear to be non-migratory and spend their entire life within five to ten miles of their natal estuary, although fish from the Chesapeake Bay have been known to migrate seasonally (south in the fall, north in the spring) to North Carolina waters.

From April to September, sexually mature females spawn around estuary inlets. Depending on the size of the female, spotted seatrout produce anywhere from 10,000 to millions of oceanic eggs. The most important nursery grounds for the young are small tidal marsh creeks and shallow grass beds, while larger juveniles are widely distributed in estuarine areas and along coastal beaches. The fry gather in schools during their first summer and tend to travel together until they are four or five years old. They mature at the age of one year, when males are about 10 inches long and females about 11 inches. At any given age, females are larger than males, and they also attain a greater maximum age and size. They may live as long as 18 years, but individuals over five years of age are rare.

Adults frequent grass beds, live oyster beds, creek mouths, drop-offs, and structures such as jetties, stumps, pilings, and wrecks, where they feed primarily on shrimp and fish. They are most abundant in depths of less than ten feet and prefer temperatures between 60 and 80° F. Water temperatures below 45° F appear to cause large-scale mortalities. They tolerate a range of salinities, but adults appear to be most numerous in waters with salinities approaching that of seawater. 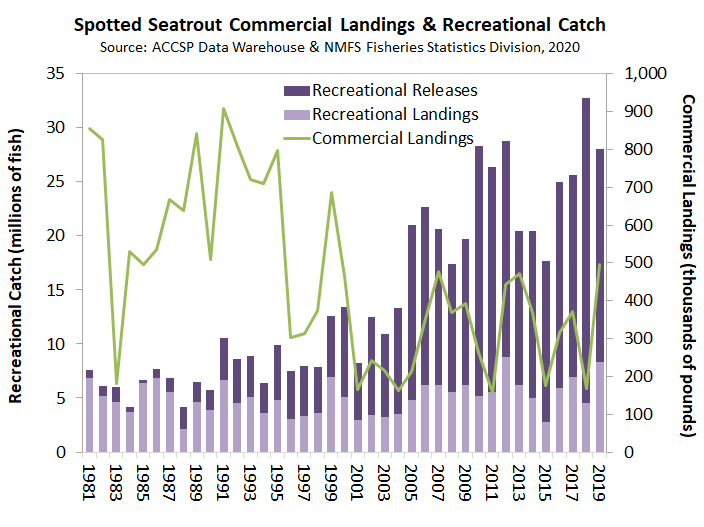 Commercial landings of spotted seatrout along the Atlantic coast historically came from Florida’s east coast and North Carolina, with Virginia, South Carolina, and Georgia accounting for a small portion of the total. From 1950 to 1976, commercial landings averaged 1.33 million pounds, but have declined since then due to increased regulation and possible declines in abundance. Significant changes to regulations include the 1987 designation of spotted seatrout as a gamefish in South Carolina, and the 1995 prohibition on the use of gillnets in Florida’s coastal waters. From 1977 to 2006, commercial landings have averaged fewer than 600,000 pounds. Variability in annual harvest is typical and seems to parallel the climatic conditions of the preceding winter and spring. In 2019, the commercial landings were estimated at 496,000 pounds, with the majority harvested in North Carolina (76%).

The spotted seatrout fishery is largely recreational. Recreational catch (harvest and releases) has markedly increased from 1981 (4.3 million fish) to 24.6 million fish in 2019. Recreational harvest has remained relatively stable throughout the time series, with 5 million fish (4.5 million pounds) harvested in 2019. Numbers and proportions of fish released alive have increased throughout the time series due to size and creel limits, as well as the encouragement of catch and release practices. In 2019, 79% of recreationally caught fish (19.6 million fish) were released.

Increased coastal development and the resulting loss of estuarine habitat, coupled with heavy fishing pressure, have effected spotted seatrout populations. The extent of anthropogenic effect is unclear as there is no coastwide stock assessment for the species and local assessments vary by state. Spotted seatrout are also susceptible to inshore calamities such as winter freezes, excessive fresh water, hurricanes, and red tide conditions. Fortunately, seatrout have a life history trait that helps maintain population size - the ability to reproduce prolifically. Compared to other marine gamefish, spotted seatrout enjoy one of the longest spawning seasons.

A coastwide stock assessment of spotted seatrout has not been conducted given the largely non-migratory nature of the species and the lack of data on migration where it does occur. Instead, North Carolina, South Carolina, Georgia and Florida have performed age-structured analyses on local stocks of spotted seatrout. Recent assessments are putting more emphasis on the inclusion of incidental bycatch data, release mortality, and the size and age structure of releases. Stock assessments provide estimates of spawning potential ratio (SPR), which is a measure of the effect of fishing pressure on the relative abundance of the mature female segment of the population.  The Commission's Spotted Seatrout FMP recommends a goal of 20 percent SPR; South Carolina and Georgia have adopted this goal, and Florida has established a 35 percent SPR goal.

In 2011, the South Atlantic Board approved the Omnibus Amendment for Spot, Spotted Seatrout, and Spanish Mackerel. The Amendment updates all three species plans with requirements of the Commission's ISFMP Charter. Specific to spotted seatrout, the Amendment includes recommended measures to protect the spawning stock, as well as a required coastwide minimum size of 12".

In March 2017, a report on Sciaenid Fish Habitat was released including information on habitat for several species, including spot, during all stages of their lives, their associated Essential Fish Habitats and Habitat Areas of Particular Concern, threats and uncertainties to their habitats, and recommendations for habitat management and research. This report is meant to be a resource when amending FMPs in the future for these species.