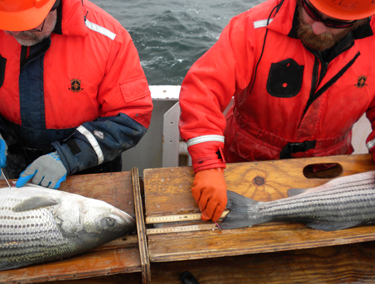 NEAMAP is a cooperative state-federal program to facilitate the collection, analysis, and dissemination of fishery-independent data in Atlantic coastal waters from the Gulf of Maine to Cape Hatteras, NC. Data are collected to support stock assessments and fisheries management, as well as enhance knowledge of the marine ecosystem. Fishery-independent data are provided for use by government agencies, recreational and commercial fisheries, researchers, and others. The intent of the Program is to provide coordination among existing fishery-independent surveys in order to optimize activities, promote comprehensive and consistent data collection, and maximize the usefulness of survey data.

A fishery-independent bottom trawl survey designed to sample fishes and invertebrates from coastal waters in depths of 20-90 feet between Aquinnah, Massachusetts and Cape Hatteras, North Carolina. The main objective of the survey is the estimation of biomass, length and age structures, and diet compositions of finfishes and select invertebrates inhabiting the area. The survey began in 2007 and is conducted aboard the F/V Darana R and led by the Virginia Institute of Marine Science.

The Massachusetts trawl survey is conducted every spring and fall since 1978 to monitor distribution, abundance, and size composition of fish populations in Massachusetts state waters.  All species of finfish and select invertebrates are weighed and measured.  A subset of species are sampled for sex, maturity, and age structures.  The survey follows a random stratified (by depth) design with a station density of approximately 1 station/19 nmi2.  The survey is conducted aboard the R/V Gloria Michelle and operated by NOAA Corps officers.

The Maine-New Hampshire Inshore Trawl Survey is a resource assessment survey performed along the coastal waters of Maine and New Hampshire. Spring and fall surveys began in the fall of 2000 and are conducted aboard the F/V Robert Michael. The boat owner, captain, and crew have been actively involved in the survey’s design and implementation.

SEAMAP is a cooperative program among state and federal agencies and universities to facilitate the collection, management, and dissemination of fishery-independent data in the Southeastern U.S. and Caribbean. Since 1982, SEAMAP has sponsored long-term standardized surveys that have become the backbone of fisheries and habitat management for its three regions – the South Atlantic, Gulf of Mexico, and Caribbean. SEAMAP-South Atlantic (SA) surveys collect data on the abundance and distribution of a variety of important commercial and recreational species (e.g., red drum, Atlantic croaker, shrimp, coastal sharks) from North Carolina to Florida. The SEAMAP-SA Database is a centralized database that houses SEAMAP-SA affiliated data. Further information about the SEAMAP-SA Database and a link to access data can be found here. Additionally, SEAMAP-SA continues to support the Southeast Regional Taxonomic Center, maintaining support for the processing and archiving of biological samples collected by SEAMAP surveys.

The SEAMAP-SA Coastal Survey is conducted by the Marine Resources Division of the South Carolina Department of Natural Resources. Since its inception in 1986, the survey has provided long-term, fishery-independent data on seasonal abundance and biomass of numerous species, including bony fishes, sharks and rays, crustaceans, and cephalopods. In recent years, the survey has also begun collecting data on sea turtles and horseshoe crabs. The sampling area includes the coastal zone of the South Atlantic Bight from Cape Hatteras, North Carolina, to Cape Canaveral, Florida.

The North Carolina Pamlico Sound Survey is a USFWS Sport Fishing Restoration funded fishery-independent trawl survey conducted by the North Carolina Division of Marine Fisheries since 1987. As a program component of the SEAMAP-South Atlantic, the survey was designed to provide long-term fishery-independent data on the distribution, relative abundance, and size composition of estuarine fish and decapod crustaceans for the waters of the Pamlico Sound and associated rivers and bays.

The objective of the SEAMAP-SA longline surveys is to conduct a multi-species survey in the Southeast region. Target species are adult red drum and coastal sharks. The program consists of three separate state-run surveys in North Carolina, South Carolina, and Georgia. Samples from adult red drum (otoliths, reproductive tissues, and genetic samples) as well as coastal sharks (genetics, life history, guts and muscle) are collected and processed to describe populations in the Southeast. In 2008, the SEAMAP-SA began supporting bottom longline surveys of the adult red drum population from North Carolina to Florida to develop a better understanding of abundance, distribution, and age composition of the stock and to provide a fishery-independent index of adult red drum abundance. The objectives were later expanded to include gathering abundance, distribution, age composition, and life history information on coastal shark species caught in the surveys. Many red drum and coastal sharks encountered in the surveys are tagged to provide information on survival rates, migratory behavior, and stock identification. Information is also collected on the presence of hatchery-origin fish in the offshore adult red drum population, as well as sex ratios, maturity, and age structure of the population. All of this information is critical for evaluating the status of the red drum population, especially the adult portion, and developing a successful red drum management program. Information derived from the surveys is also useful for coastal shark assessments in the South Atlantic.

The objective of the SEAMAP-SA Reef Fish Survey is to collect and provide abundance and life-history information on reef fish species for use in stock assessments, research, and management decisions. The SEAMAP-SA Reef Fish Survey is coordinated with Marine Resources Monitoring, Assessment and Prediction (MARMAP) and the Southeast Fisheries Independent Survey (SEFIS) sampling efforts, collectively referred to as the Southeast Reef Fish Survey (SERFS). MARMAP has conducted fishery‐independent research on the continental shelf and shelf edge between Cape Hatteras, North Carolina, and St. Lucie, Florida, for over 40 years and is housed at the Marine Resources Research Institute (MRRI) of the South Carolina Department of Natural Resources (SCDNR). In 2008, SEAMAP-SA started to provide funding to complement the MARMAP program. The main gear types used are chevron traps, short bottom longline, and rod and reel; oceanographic variables (mostly temperature, salinity, and depth) are also measured using a CTD.

Horseshoe crabs (Limulus polyphemus) are an ecologically, economically, and medically important species occurring on the Atlantic coast of the U.S.  Despite supporting a fishery for over 100 years, horseshoe crabs largely were ignored by fisheries managers until increasing commercial landings raised concerns about the sustainability of the resource. The Commission implemented a fishery management plan to regulate the harvest and also noted research needed for providing the requisite data. The horseshoe crab trawl survey, conducted by Virginia Tech since 2002, is the only survey designed to sample the horseshoe crab population in coastal waters. Its geographic scope is broad, covering the Atlantic coast from Atlantic City, New Jersey to Wachapreague, Virginia, and also the lower Delaware Bay. The survey area is stratified into nearshore and offshore areas and into trough and non-trough areas. All strata are randomly sampled. Relative abundance of immature and mature male and female crabs are tracked separately to inform the development of a stage- and sex-specific model in the most recent peer-reviewed stock assessment (2019)

Relative abundance data from the horseshoe crab trawl survey are a critical component of the Commission’s coastwide horseshoe crab stock assessment and the Adaptive Resource Management (ARM) framework, both of which were endorsed through independent peer reviews.  The ARM framework includes modeling to link horseshoe crab harvest to multispecies objectives, particularly to demographic recovery of imperiled red knots and other shorebirds. The ARM was developed jointly by the Commission, U.S. Fish and Wildlife Service, and U.S. Geological Survey in recognition of the importance of horseshoe crab eggs to migratory shorebirds stopping over in the Delaware Bay Region.

To learn more about the survey, contact Eric Hallerman at Virginia Tech. 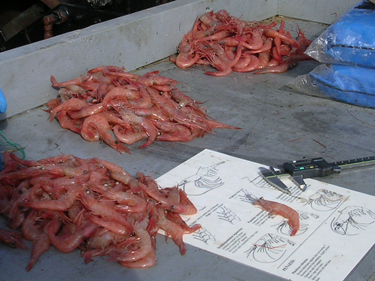 The Gulf of Maine Northern Shrimp Trawl Survey has been conducted for since 1983, representing one of the longest running cooperative state/federal research surveys along the Atlantic coast. The survey monitors the abundance (number of shrimp), biomass (weight of shrimp), and size and sex stage composition of the northern shrimp stock throughout the Gulf of Maine. The data provide an understanding of year class strength, male/female demographics,  and maturity of shrimp in the population. The survey focuses its efforts in offshore waters in depths greater than 50 fathoms and is timed to sample both males and females during summer. The data collected form the basis of the annual northern shrimp stock assessment used by fishery managers from Maine, New Hampshire, and Massachusetts to set each year’s fishing regulations. Although the survey focuses on northern shrimp, it collects information on several additional species. Survey data have also been used in stock assessments for Atlantic herring, monkfish, squid, white hake, and witch flounder.

The survey is conducted aboard the R/V Gloria Michelle, a 65-foot, 96 gross ton stern trawler. Scientific crew members are provided by the National Oceanic and Atmospheric Administration’s (NOAA) Northeast Fisheries Science Center, the states of Maine, Massachusetts, and New Hampshire, and the Commission.

Currently, the survey duration is three weeks from the end of July to mid-August, divided into four survey legs. The western Gulf of Maine is divided into 10 strata. Each stratum is sampled in proportion to its area. Sampling intensity is doubled in strata that had the highest abundances of shrimp historically. Eighty-two sites are sampled, three-quarters of which are randomly selected and the remainder are fixed locations. 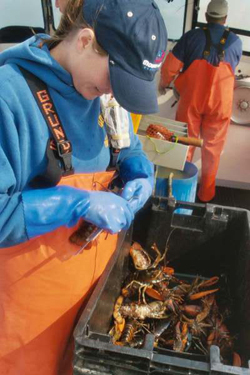 Lobster stock assessments identified the need for a different type of survey to characterize abundances across a range of habitats and lobster sizes. Although several fishery-independent trawl surveys encounter lobster, trawls cannot operate on rocky or ledge habitats preferred by lobster. Also, trawl survey operations are challenging in areas where fixed gear (e.g., lobster pots and gillnets) is deployed. Therefore, a large portion of productive lobster habitat is not accessible to trawl survey gear. In contrast to trawl surveys, the Ventless Trap Survey was specifically designed to catch lobster using a more effective gear, the lobster trap. The Ventless Trap Survey is a collaborative, standardized monitoring effort designed and implemented starting in 2006 by the states of New York, Connecticut, Rhode Island, Massachusetts, New Hampshire, and Maine. New York and Connecticut discontinued sampling after 2009 due to lack of funding, while sampling has continued in the other states.

Commercial lobster traps are required to have an escape vent that allows most sublegal lobster to exit the trap. Escape vents reduce the stress and potential mortality associated with being trapped and processed on deck. The Ventless Trap Survey utilizes multiple sets of either six alternating ventless and vented traps or three ventless traps on a common line deployed in the same location, throughout each sampling season. The vented traps are designed to monitor trap catch rates of mostly legal-sized lobster. The ventless traps are designed to monitor catch rates of all lobster sizes, including sublegal lobster representing future recruitment to the fishery. Catch rates from both trap types can be compared to evaluate size selectivity of vented traps fished in the commercial fishery. The use of ventless traps improves estimation of abundance trends in small, sublegal lobster not yet recruited to the fishery.

Traps are deployed between June and November in a random stratified fashion such that sets of traps are placed at randomly selected seasonal sampling sites within different depth categories and geographic areas. The targeted soak time is three nights, but may vary depending on weather conditions. All lobster caught in the Ventless Trap Survey are examined and biological information is recorded, including carapace length, sex, egg-bearing status, shell disease condition, and v-notch status.

The Ventless Trap Survey data are used in lobster stock assessments as a fishery-independent index of abundance. The biological data collected provide additional vital information about changes in population length structure and sex ratio over time.