Atlantic striped bass (Morone saxatilis) are an estuarine species that can be found from Florida to Canada, although the stocks that the Commission manages range from Maine to North Carolina. A long-lived species (at least up to 30 years of age), striped bass typically spend the majority of their adult life in coastal estuaries or the ocean, migrating north and south seasonally and ascending to rivers to spawn in the spring.

Mature females (age six and older) produce large quantities of eggs, which are fertilized by mature males (age two and older) as they are released into riverine spawning areas. While developing, the fertilized eggs drift with the downstream currents and eventually hatch into larvae. After their arrival in the nursery areas, located in river deltas and the inland portions of coastal sounds and estuaries, they mature into juveniles. They remain in coastal sounds and estuaries for two to four years and then join the coastal migratory population in the Atlantic Ocean. In the ocean, fish tend to move north during the summer and south during the winter. Important wintering grounds for the mixed stocks are located from offshore New Jersey to North Carolina. With warming water temperatures in the spring, the mature adult fish migrate to riverine spawning areas to complete their life cycle. The majority of the coastal migratory stock originates in the Chesapeake Bay spawning areas, with significant contributions from the spawning grounds of the Hudson and Delaware Rivers. 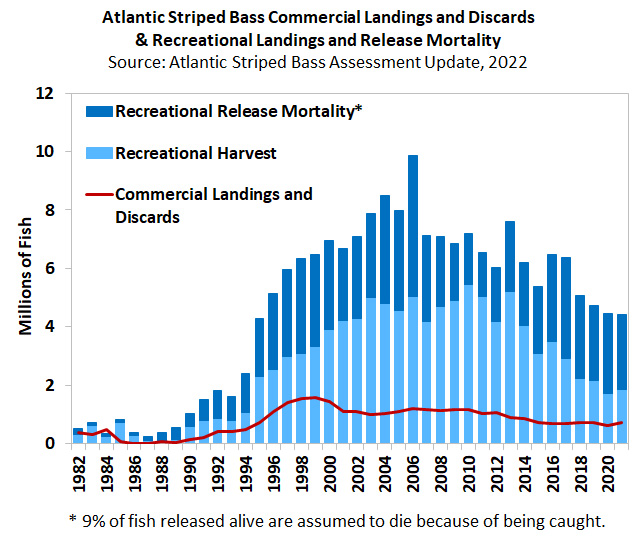 In 2021, total Atlantic striped bass removals (commercial and recreational, including harvest, commercial discards and recreational release mortality) was estimated at 5.1 million fish, which is about the same as removals in 2020. The recreational sector accounted for 86% of total removals by number. It should be noted that the recreational catch estimates reported here reflect the new, improved MRIP mail-based survey and are not directly comparable to FMP Review reports published prior to 2019.

Please refer to the 2021 FMP Review for more details on annual fishery performance by state and sector. 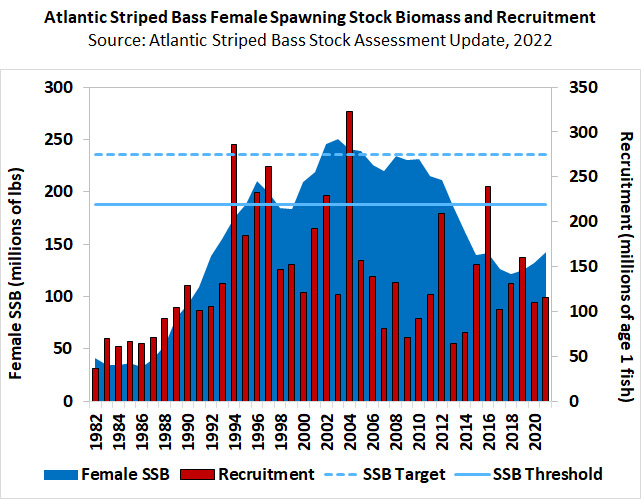 In November 2022, the Board reviewed the results of the 2022 Atlantic Striped Bass Stock Assessment Update, which uses the same model from the approved, peer-reviewed 2018 Benchmark Stock Assessment. The accepted model is a forward projecting statistical catch-at-age model, which uses catch-at-age data and fishery-dependent data and fishery-independent survey indices to estimate annual population size, fishing mortality, and recruitment. The 2022 assessment indicated the resource is still overfished but no longer experiencing overfishing relative to the updated reference points. Female SSB in the terminal year (2021) was estimated at 143 million pounds, which is below the SSB threshold of 188 million pounds and below the SSB target of 235 million pounds. F in 2021 was estimated at 0.14, which is below the F threshold of 0.20 and below the F target of 0.17. The updated fishing mortality reference points took into account the period of low recruitment the stock has experienced in recent years.

The 2022 Assessment Update also included short-term projections to determine the probability of SSB being at or above the SSB target by 2029, which is the stock rebuilding deadline. Under the current fishing mortality rate, there is a 78.6% chance the stock will be rebuilt by 2029, indicating a reduction in catch is not necessary at this time. The projections also took into account the period of low recruitment the stock has experienced in recent years. 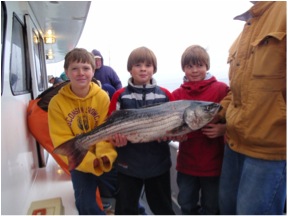 Currently, Atlantic striped bass is managed under Amendment 7 to the Interstate Fishery Management Plan (FMP, 2022), which consolidates Amendment 6 and its associated addenda into a single document. Amendment 7 establishes new requirements for the following components of the FMP: management triggers, conservation equivalency, additional measures to address recreational release mortality, and the stock rebuilding plan. This Amendment builds upon the Addendum VI to Amendment 6 action to address overfishing and initiate rebuilding in response to the overfished finding from the last stock assessment, requiring the Board to rebuild the stock by 2029. Amendment 7 strengthens the Commission’s ability to reach the rebuilding goal by implementing a more conservative recruitment trigger, providing more formal guidance around uncertainty in the conservation equivalency process, and implementing measures intended to increase the chance of survival after a striped bass is released alive in the recreational fishery. All provisions of Amendment 7 are effective May 5, 2022 except for gear restrictions. States must implement new gear restrictions by January 1, 2023.

Amendment 7 also maintains the same recreational and commercial measures specified in Addendum VI to Amendment 6, which were implemented in 2020. As such, all approved Addendum VI conservation equivalency programs and state implementation plans are maintained until such measures are changed in the future.  The 2022 stock assessment found that under the current fishing mortality rate, there is a 78.6% chance the stock will be rebuilt by 2029, indicating a reduction in catch is not necessary at this time.

Pending Action
In August 2021, the Board initiated Addendum VII to Amendment 6 to consider allowing the voluntary transfer of commercial striped bass ocean quota between states/jurisdictions that have commercial quota. Given the recent approval of Amendment 7, this draft addendum is now Draft Addendum I to Amendment 7. The Board approved Draft Addendum I for public comment in November 2022, and will consider taking final action in February 2023.

Management History
Increased fishing pressure in the 1970s, coupled with degradation and loss of habitat, led to stock collapse and stimulated the development of a cooperative interstate fisheries management plan (FMP). While a notable first step, the first FMP (1981) and Amendments 1 and 2 to the plan (1984) only provided recommendations on how to manage the resource. States could take voluntary actions under these management plans but there was no statutory requirement that ensured unified management actions by all the involved states. The passage of the Atlantic Striped Bass Conservation Act in 1984 (Striped Bass Act) changed this by requiring the states, through the Commission, to develop and implement management plans that included mandatory conservation measures. Amendment 3 (1985) was the first plan under the Striped Bass Act with such measures, including regulations to protect the 1982 year class, the first modestly-sized cohort for nearly a decade. Some states elected for an even more conservative approach and imposed a total moratorium to protect the 1982 year class. The Amendment contained a mechanism to relax fishery regulations based on a juvenile abundance index. The mechanism was triggered with the recruitment of the 1989 year class and led to the implementation of Amendment 4 (1989), which aimed to rebuild the resource rather than maximize yield. In 1995, with adoption of Amendment 5, the Commission declared Atlantic coastal striped bass stocks fully recovered.

Amendment 6 (2003) introduced a new set of biological reference points based on female spawning stock biomass (SSB), and a suite of management triggers based on the reference points. It also restored the commercial quota for the ocean fishery to 100% of average landings during the 1972-1979 historical period, and recreational fisheries were constrained by a 2-fish bag limit and a minimum size limit of 28 inches, except for the Chesapeake Bay fisheries, Albemarle-Roanoke (A/R) fisheries, and fisheries with approved conservation equivalency proposals. From 2007 to 2014, a series of four Addenda (I-IV) to Amendment 6 were implemented. These addenda addressed a range of issues, including implementation of a bycatch monitoring program, modifying the definition of recruitment failure, implementation of a mandatory commercial harvest tagging program, and establishing one set of F reference points for the coastal migratory population in all management areas. Addendum IV (2014) also formally defered management of the A/R stock to the State of North Carolina, under the auspices of the Commission, since the A/R stock was deemed to contribute minimally to the coastal migratory population.

In 2019, a new benchmark assessment which used updated recreational catch estimates, changed our understanding of stock status. The benchmark assessment found the stock to be overfished and experiencing overfishing. As a result, Addendum VI to Amendment 6 was initiated to end overfishing, and bring F to the target level in 2020. Specifically, the Addendum reduced all state commercial quotas by 18%, and implemented a 1-fish bag limit and a 28” to less than 35” recreational slot limit for ocean fisheries and a 1-fish bag limit and an 18” minimum size limit for Chesapeake Bay recreational fisheries. These measures were implemented in 2020 and designed to achieve at least an 18% reduction in total removals at the coastwide level. The Addendum maintained flexibility for states to pursue alternative regulations through conservation equivalency and the Board approved CE programs for multiple states. Since catch and release practices contribute significantly to overall fishing mortality, the Addendum mandated the use of circle hooks when fishing with bait to reduce release mortality in recreational striped bass fisheries.

As it considered its actions under Addendum VI, the Management Board also discussed the development of a new Amendment to the FMP, one that reflected our understanding of the resource and the fisheries that depend on it. This led to the development and approval of Amendment 7 in 2022.