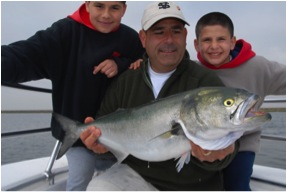 One of the most popular recreational fish along the Atlantic coast, a father and sons with a bluefish. Photo credit: John McMurray, www.nycflyfishing.com

Bluefish are a migratory, pelagic species found throughout the world in most temperate coastal regions, except the eastern Pacific. Bluefish migrate seasonally, moving north in spring and summer as water temperatures rise and moving south in autumn and winter to the South Atlantic Bight. During the summer, concentrations of bluefish are found in waters from Maine to Cape Hatteras, North Carolina. During winter’s colder months they tend to be found offshore between Cape Hatteras and Florida. Bluefish generally school by size, with schools covering up to tens of square miles.

Bluefish are fast growers and opportunistic predators, feeding voraciously on almost any prey they can capture. Over 70 species of fish have been found in their stomach contents, including butterfish, mackerel, and lobster. Razor sharp teeth and a shearing jaw movement allow bluefish to ingest large parts, which increases the maximum prey size bluefish can catch. Bluefish live up to 12 years and may exceed 39 inches and 31 pounds.

Bluefish reach sexual maturity at age two and spawn offshore from Massachusetts through Florida. Discrete groups spawn at different times and are referred to by the season in which they spawn: the spring-spawned cohort and the summer-spawned cohort. (A cohort is defined as a group of fish spawned during a given period, usually within a year; also known as a year-class or age-class.) Recent research has also identified a fall-spawned cohort, demonstrating an expanded and prolonged spawning season. The cohorts mix extensively on the fishing grounds and probably comprise a single genetic stock. 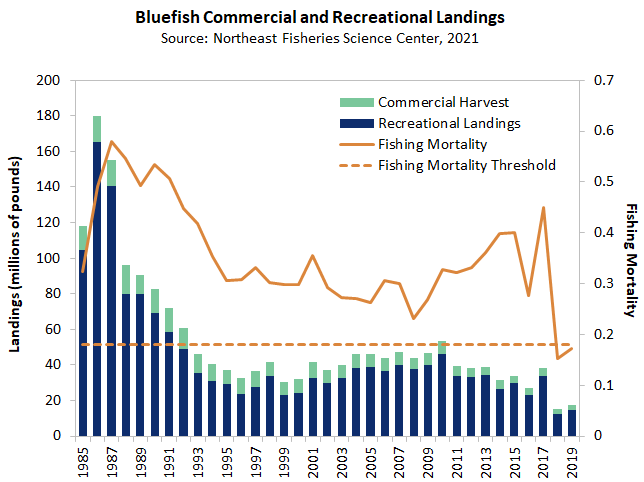 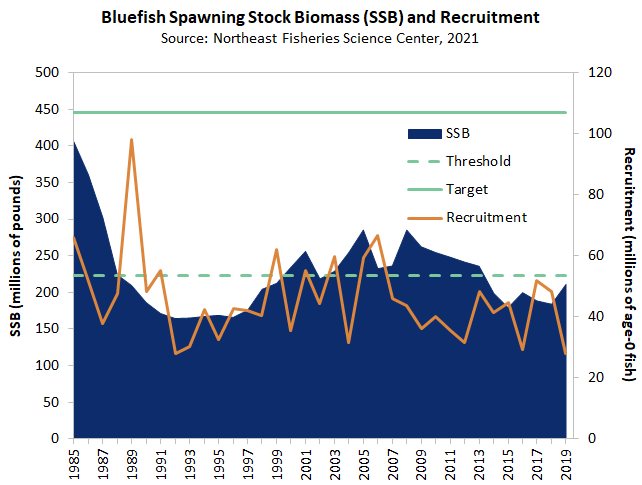 Based on the 2021 management track stock assessment conducted by the Northeast Fisheries Science Center, bluefish are overfished, but were not experiencing overfishing in 2019. The updated stock assessment incorporated data through 2019. SSB in 2019 was estimated to be 211 million pounds, which is 95% of the SSB threshold of 222 million pounds. Fishing mortality (F) in 2019 was estimated to be 0.172, below the F threshold (FMSY PROXY= F35% =0.181). Although fishing mortality was below the threshold in 2018 and 2019, fishing mortality exceeded the updated threshold every year from 1985 to 2017. The largest recruitment in the time series occurred in 1989 at 98 million fish, and the lowest recruitment was in 2016 at 29 million fish. Recruitment over the last 10 years has varied around the time series average of 46 million fish. A research track stock assessment is scheduled for November of 2022

Bluefish is currently managed under Amendment 1 to the Interstate Fishery Management Plan (FMP) for Bluefish and Addendum I. Amendment 1 allocates 83% of the resource to recreational fisheries and 17% to commercial fisheries. However, the commercial quota can be increased up to 10.5 million pounds if the recreational fishery is projected to not land its entire allocation for the upcoming year. The commercial fishery is controlled through state-by-state quotas based on historic landings from 1981-1989. The recreational fishery is managed under a coastwide 3-fish bag limit for private anglers and shore-based fishermen, and a 5-fish bag limit for for-hire fishermen. A coastwide biological sampling program to improve the quantity and quality of information used in future bluefish stock assessments was implemented in 2012 through Addendum I.

The Commission and Council approved an acceptable biological catch (ABC) limit of 16.28 million pounds for the 2021 fishing season, After accounting for discards, the ABC translates to a commercial quota of 2.77 million pounds and a recreational harvest limit of 8.34 million pounds.

In June 2021, the Board and Council recommended approval of the Bluefish Allocation and Rebuilding Amendment. The Amendment updates the FMP goals and objectives; initiates a 7-year rebuilding plan; establishes new allocations between commercial (14% of the acceptable biological catch or ABC) and recreational fisheries (86% of the ABC); implements new state-by-state commercial allocations; revises the quota transfers process between the recreational and commercial fisheries; and revises how the FMP accounts for management uncertainty. Additional information regarding the recommended changes are available at http://www.asmfc.org/uploads/file/60c7b24fpr21-11_Bluefish-Amendment.pdf. As next steps, the Commission will consider final approval of the Amendment at its August meeting and NOAA Fisheries will consider the plan (as submitted by the Council) for final approval.