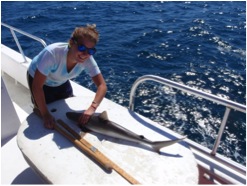 In the mid-1980s, sharks were considered an underutilized resource and fishermen were encouraged to fish for them. Over the next few years, fishing effort increased considerably and the impact of unregulated harvest was beginning to take its toll on some shark species. The National Marine Fisheries Service (NMFS) stepped in to manage these species followed by the Commission with complementary measures.

The commercial shark fishery is generally concentrated in the Southeastern U.S. and Gulf of Mexico. The Atlantic fishery targets both large coastal shark (LCS) and small coastal shark (SCS) species with bottom longline as the primary commercial gear, followed by gillnets. An Atlantic bottom longline is 3.4 miles in length on average and contains about 300 hooks. Skates, other sharks, or various finfish are used as bait. The gear typically consists of a heavy monofilament mainline with lighter weight monofilament gangions, or branch lines, coming off the main line. The Southeast shark gillnet fishery is comprised of several vessels based primarily out of ports in northern Florida. Vessels typically use nets ranging from 456 to 2,280 meters long and 6.1 to 15.2 meters deep, with about 5.2 inches of stretched mesh. Preliminary commercial LCS landings in 2019 were approximately 513,513 pounds dressed weight (dw), an 18% decrease from 2018, while landings of SCS species in 2019 were approximately 424,907 pounds dw, a 7% increase from 2018 landings. Atlantic pelagic shark species were 139,936 pounds dw in 2019, a 16% decrease from 2018 landings.

The recreational fishery for Atlantic sharks occurs in federal and state waters from New England to the Gulf of Mexico and Caribbean Sea. Once called “the poor man’s marlin,” recreational shark fishing is now a popular sport at all social and economic levels, largely due to accessibility to the resource. Sharks can be caught by rod and reel virtually anywhere in saltwater, with even large specimens available to surf anglers or small boaters in the nearshore area. Most recreational fishing takes place from small to medium-size vessels. SCS species such as Atlantic sharpnose, bonnethead, and finetooth comprise the majority of the recreational harvest. Short-fin mako and common thresher sharks are generally accessible only to those aboard ocean-going vessels. Across all species management groups, 162,108 sharks were harvested during the 2019 recreational fishing season in the Atlantic region, a 42% increase compared to the 2018 season. The recreational shark fishery predominately targets sharks from the smoothhound, pelagic, and SCS complexes. In 2019, approximately 66,172 sharks from the SCS complex were recreationally harvested, a 21% increase from 2018. The LCS complex had 83,431 sharks harvested in 2019, while the pelagic shark complex had 12,505 sharks harvested in 2019, an increase of 8% from 2018. Approximately 56,373 smoothhound sharks were recreationally harvested in the Atlantic region, an increase of 38% from 2018. 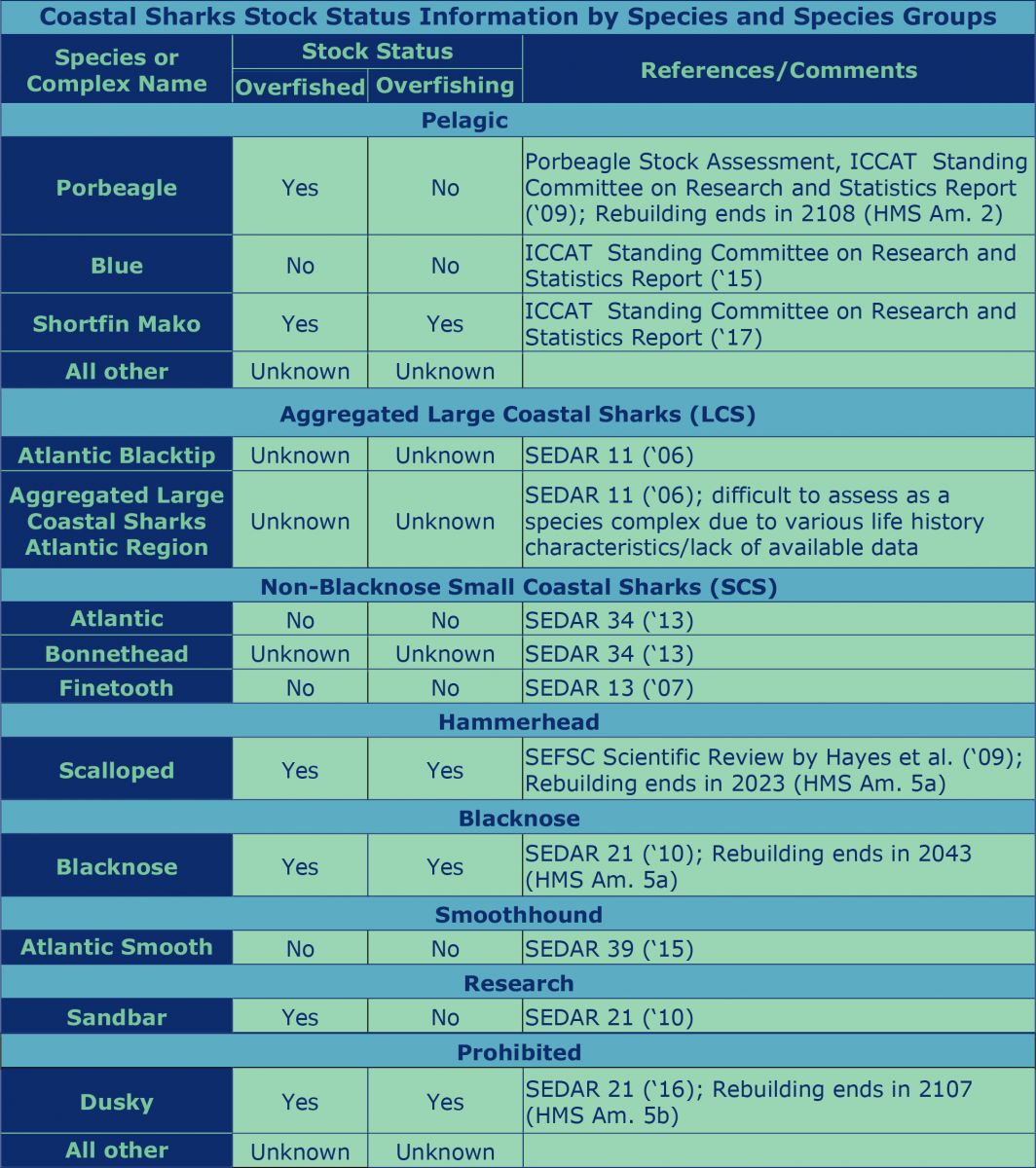 In April 2019, the Board approved changes to the recreational size limit for Atlantic shortfin mako sharks in state waters, specifically, a 71-inch straight line fork length (FL) for males and an 83-inch straight line FL for females. These measures are consistent with those required for federal highly migratory species (HMS) permit holders under HMS Amendment 11, which was implemented in response to the 2017 Atlantic shortfin mako stock assessment that found the resource is overfished and experiencing overfishing.

In October 2019, the Board approved changes to the gear requirements for recreational shark fishing. For recreational shark fishing in state waters, anglers are required to use non-offset, corrodible, non-stainless steel circle hooks, except when fishing with flies or artificial lures. The measure is to be implemented no later than July 1, 2020. These measures were approved to promote consistency with those approved through HMS Amendment 11.

NOAA Fisheries has increased the retention limit for the commercial aggregated large coastal shark (LCS) and hammerhead shark management groups for directed shark limited access permit holders in the Atlantic region from 36 to 55 sharks per vessel per trip effective March 23, 2021. As agreed upon by the Commission’s Coastal Sharks Management Board, the Commission will follow NOAA Fisheries for in-season changes to the commercial retention limit, therefore, no more than 55 sharks per vessel per trip may be retained from the aggregated LCS and hammerhead management groups by a state licensed fishermen effective March 23, 2021.