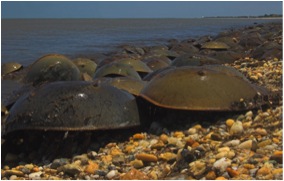 Horseshoe crabs (Limulus polyphemus) are a marine arthropod found along the Atlantic coast from northern Maine to the Yucatan Peninsula and the Gulf of Mexico. The Delaware Bay supports the largest spawning population in the world. Adults either remain in estuaries or migrate to the continental shelf during the winter months. Migrations resume in the spring when the horseshoe crabs move to beach areas to spawn. Juveniles hatch from the beach environment and spend the first two years in nearshore areas.

Spawning usually coincides with the high tide during the full and new moon. Breeding activity is consistently higher during the full moon than the new moon and is also greater at night. Adults prefer sandy beach areas within bays and coves that are protected from surf. Eggs are laid in clusters or nest sites along the beach with females laying approximately 90,000 eggs per year in different egg clusters.

The eggs play an important ecological role in the food web for migrating shorebirds. The Delaware Bay Estuary is the largest staging area for shorebirds in the Atlantic Flyway. An estimated 425,000 to one million migratory shorebirds converge on the Delaware Bay to feed and rebuild energy reserves prior to completing their northward migration. 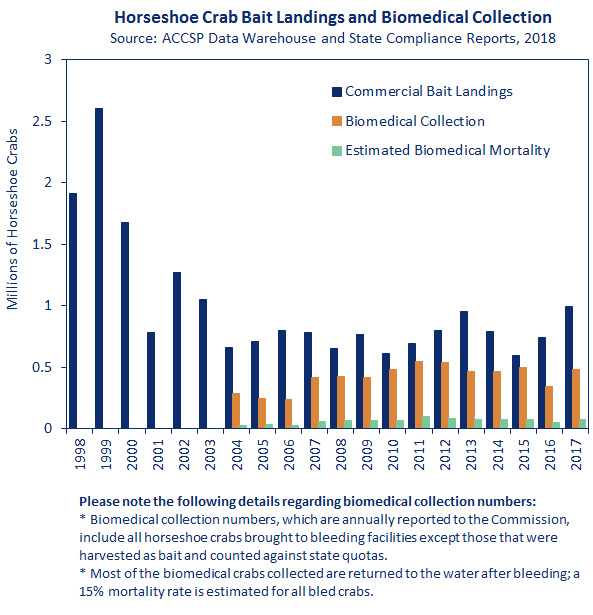 Horseshoe crabs provide the backdrop for one of the most interesting marine resource management issues along the Atlantic coast. In addition to their role as a food source for birds, horseshoe crabs provide bait for commercial American eel and conch fisheries along the coast. Their unique blood is also used by the biomedical industry to produce Limulus Amoebocyte Lysate (LAL). The challenge of fisheries managers is to ensure that horseshoe crabs are managed to meet all these diverse needs, while conserving the resource for future generations.

From the 1850s to the 1920s, between 1.5 and two million horseshoe crabs were harvested annually for fertilizer and livestock feed. Harvest dropped throughout the 1950s and ceased in the 1960s. Between 1970 and 1990, reported commercial harvest ranged from less than 20,000 pounds to greater than two million pounds annually. Since the mid- to late 1990s, commercial harvest has been sold primarily as bait for the American eel and whelk pot fisheries. Increased need for bait in the whelk fishery likely caused an increase in horseshoe crab harvest in the 1990s, with a peak of nearly six million pounds in 1997. Reported coastwide bait landings in 2018 remained well below the coastwide quota (1.59 million crab) at 658,589 crabs.

Commercial fishermen have adopted new gear such as bait bags and cups allowing them to effectively catch eel and conch while using as little as a tenth of the previous portion of bait per pot. The majority of horseshoe crab harvest comes from the Delaware Bay Region, followed by the New York, New England, and the Southeast regions. Trawls, hand harvests and dredges make up the bulk of commercial horseshoe crab bait landings. Horseshoe crabs are discarded from commercial gears including dredges, trawls and gillnets. Estimates of discards and associated mortalities are highly variable and have large associated errors. However, according to the 2019 benchmark stock assessment discards and discard mortality have increased notably in the Delaware Bay region. The number of dead horseshoe crabs due to discarding can vary from about a fourth to half of the number of crabs harvested for bait. However, in the Delaware Bay region, only male crabs may be harvested as bait, and these are typically adults. Discard mortality impacts both males and females, as well as mature and immature crabs. Discards in the Delaware Bay region have increased notably since 2013, when male-only bait harvest was required for the entire region through the Adaptive Resource Management (ARM) Framework.

Horseshoe crabs are also collected by the biomedical industry to support the production of LAL, a clotting agent that aids in the detection of human pathogens in patients, drugs, and intravenous devices. Blood from the horseshoe crab is obtained by collecting adults and extracting a portion of their blood. Most crabs collected and bled by the biomedical industry are, as required by the FMP, released alive to the water from where they were collected; however, a portion of these crabs die from the procedure. Crabs harvested for bait are sometimes bled prior to being processed and sold by the bait industry; these crabs are counted against the bait quota. Biomedical use has increased since 2004, when reporting began, but has been fairly stable in recent years with 464,482 crabs brought to biomedical facilities in 2018. Biomedical data were included as part of the 2019 benchmark stock assessment, and continue to be provided to the Commission through state compliance reports, although the data remain confidential to the public at a regional or state level.

The 2019 Horseshoe Crab Benchmark Stock Assessment evaluated the stock status of the resource by region, finding populations within the Delaware Bay and Southeast regions remaining consistently neutral and good, respectively, through time.  The Northeast region population has changed from poor to neutral, while the status of the New York region population has trended downward from good, to neutral, and now to poor. The Benchmark Assessment was endorsed by the Peer Review Panel and accepted by the Horseshoe Crab Management Board  for management use.

To date, no overfishing or overfished definitions have been adopted for management use. For the assessment, biological reference points were developed for the Delaware Bay region horseshoe crab population although not endorsed by the Peer Review Panel for use in management. However, given the assessment results of low fishing mortality and relatively high abundance, overfishing and an overfished status are unlikely for female horseshoe crabs in the Delaware Bay region.

In the absence of biological reference points, stock status was based on the percentage of surveys within a region (or coastwide) having a >50% probability of the final year (2017) being below their 1998 levels. “Poor” status was >66% of surveys meeting this criterion, “Good” status was <33% of surveys, and “Neutral” status was 34 – 65% of surveys.  Based on this criterion, stock status for the Northeast region was neutral; the New York region was poor; the Delaware Bay region was neutral; and the Southeast region was good. Coastwide, abundance has fluctuated through time with many surveys decreasing after 1998 but increasing in recent years. The coastwide status includes surveys from all regions and indicates a neutral trend, likely due to positive and negative trends being combined.