Scup (Stenotomus chrysops) are a migratory, schooling species found on the continental shelf of the Northwest Atlantic, commonly inhabiting waters from Cape Cod, Massachusetts to Cape Hatteras, North Carolina. The abundance of scup in a specific area is frequently influenced by water temperature. Scup prefer temperatures greater than 45 degrees F and are most frequently encountered in water temperatures from 55 to 77 degrees F.

Scup overwinter in offshore waters from southern New Jersey to Cape Hatteras. When water temperatures begin to rise in spring and summer scup migrate to more northern and inshore waters to spawn. Spawning areas include locations from southern New England to Long Island, New York. Large fish arrive to the spawning grounds first, followed by successive waves of smaller individuals, suggesting that scup school by size. Larval scup are pelagic and are found in coastal waters during warmer months. Juvenile scup use a variety of coastal habitats and can dominate the overall fish population in large estuarine areas during the summer months. 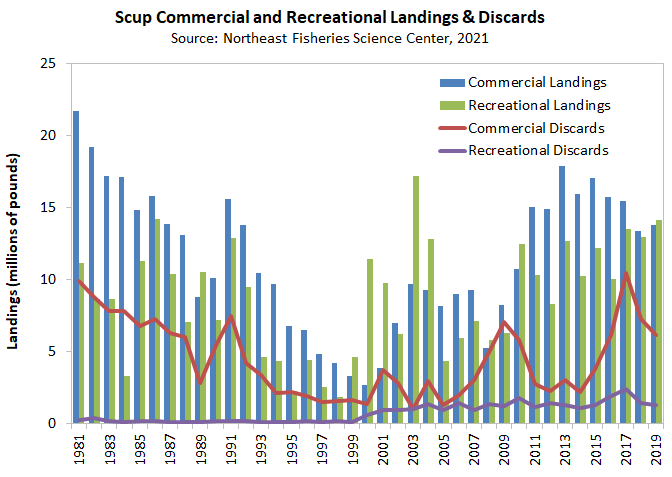 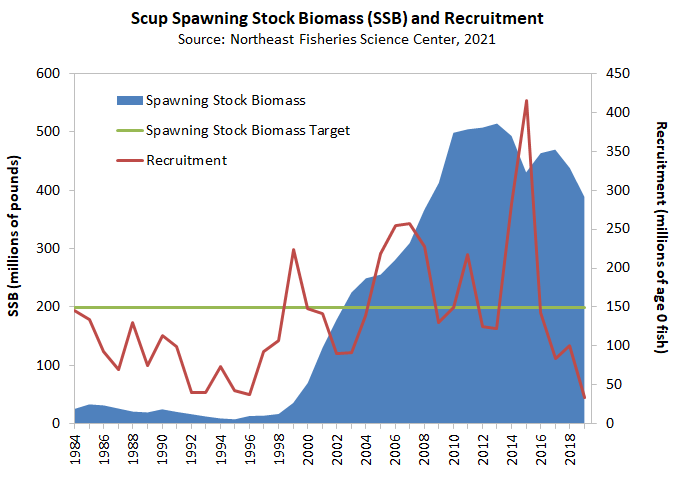 The 2021 management track stock assessment indicated the stock is not overfished nor experiencing overfishing. SSB estimated at 389 million pounds in 2019 is about two times the target of 198 million pounds.

Since 1984, recruitment (e.g., the number of fish entering the population) estimates are influenced mainly by the fishery and survey catches-at-age, and averaged 136 million fish during 1984-2019. The 2006, 2007 and 2015 year classes are estimated to be the largest of the time series, at 255, 258, and 415 million age 0 fish. Below average recruitment occurred in 2017-2019. Stock biomass is projected to further decrease toward the target unless more above average year classes recruit to the stock in the short-term.

Scup are one of four species jointly managed by the Commission and the Mid-Atlantic Fishery Management Council (MAFMC). Scup are managed under Amendment 13 to the Summer Flounder, Scup and Black Sea Bass Fishery Management Plan (August 2002) and its subsequent Addenda (Addenda IX - XXXI). The management program divides a total annual quota between the recreational fishery (22%) and the commercial fishery (78%). Recreational fishery management measures include a combination of minimum size limits, bag limits, and fishing seasons. Since 2004, the states of Massachusetts, Rhode Island, Connecticut, and New York have formed a northern region when setting their recreational regulations. This regional approach enables greater consistency between the states where fishermen from different states are often fishing alongside each other in the same waters.

Addendum XXIX (2017) shortens the length of the commercial scup summer period and extends the length of the winter II period to allow for the better utilization of the commercial quota, which was under-harvested in recent years. The following new quota periods were implemented beginning in 2018: Winter 1, January 1‐April 30 (120 days); Summer, May 1‐September 30 (153 days); Winter II, October 1‐December 31 (92 days).

The Board and Council has set new specifications for 2022 with a commercial quota of 20.38 million pounds and a recreational harvest limit (RHL) of 6.08 million pounds. Compared to 2021 landings limits, this represents a slight decrease in the commercial quota and a minor increase in the RHL. However, in response to high levels of recreational landings in recent years the Board and Council agreed to increase the scup recreational minimum size by one inch in state and federal waters. In state waters, this one‐inch increase will be applied to each state’s measures, which varies by state and mode. No changes were made to the commercial measures for 2022.

The Policy Board and MAFMC acknowledged this approach will not solve all recreational fisheries management challenges. With this in

mind, they agreed to continue refinement of the Percent Change Approach as well as two other options considered within the Draft Framework/Addenda, with particular emphasis on using improved statistical models to develop measures. Use of the approved Percent Change Approach will sunset no later than the end of 2025 with a goal of implementing a new and improved approach to managing the recreational fisheries by the beginning of 2026.