Juvenile shad leave their natal (home) river within the first year and will spend the next few years at sea, schooling in large numbers with shad from other regions and feeding on plankton and other small fish or crustaceans. Upon reaching maturity – usually at about age four – they will return to the streams they were born in to spawn. Males or "buck shad" return first, followed by females or "roe shad." They typically spawn at night or during overcast days. In the southern range, females release as many as 700,000 eggs during the spawning season, but both males and females normally die after spawning. In the northern range, females typically release 300,000 eggs or fewer during the spawning season; however, most shad will return to spawn again in the following years, with some shad living up to 13 years.

River herring is a collective term for alewife and blueback herring. Alewife spawn in rivers, lakes, and tributaries from northeastern Newfoundland to South Carolina, but are most abundant in the Mid-Atlantic and the Northeast. Blueback herring more commonly spawn in swiftly flowing rivers and tributaries from Nova Scotia to northern Florida, but are most numerous in waters from Chesapeake Bay south. Mature alewife (ages three to eight) and blueback herring (ages three to six) migrate rapidly downstream after spawning. Juveniles remain in tidal freshwater nursery areas in spring and early summer, but may also move upstream with the encroachment of saline water. As water temperatures decline in the fall, juveniles move downstream to more saline waters. Little information is available on the life history of juvenile and adult river herring after they emigrate to the sea and before they mature and return to freshwater to spawn. 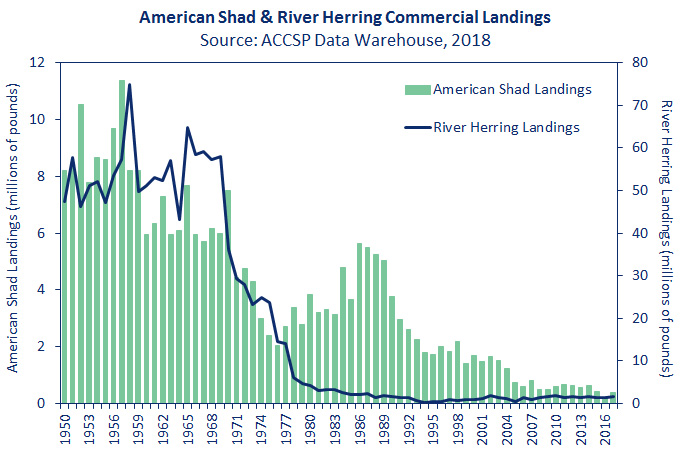 Shad and river herring once supported the largest and most important commercial and recreational fisheries along the Atlantic coast. Since colonial times, the blockage of spawning rivers by dams and other impediments, combined with habitat degradation and overfishing, have severely depleted shad and river herring populations.

Commercial landings for these species have declined dramatically from historic highs. Commercial landings by domestic and foreign fleets peaked at 140 million pounds in 1969. Since 2000, domestic landings totaled less than four million pounds in any given year, with a historic low of 823,000 pounds occurring in 2006. In 2005, the directed at-sea fishery for American shad was closed, and subsequent landings from the ocean are only from the bycatch fishery. Approximately 349,942 pounds of American shad were landed in 2017.

catches of these species remain largely unknown. Anecdotally, recreational fishing for American shad is popular coastwide during the spring spawning run, but harvest information is unreliable. The Marine Recreational Information Program (MRIP) estimates numbers harvested and released by anglers, but estimates are imprecise, show few trends, and are deemed not useful for management purposes. Furthermore, MRIP concentrates its sampling strata in coastal waters and does not capture data on recreational fisheries occurring in inland waters. Few states conduct creel surveys or other consistent survey instruments (diary or log books) in inland waters to collect data on recreational shad and river herring catch. Some data are reported in the state chapters of the current stock assessment, but data are too sparse to conduct systematic comparisons of trends.

The Commission also continues to collaborate with New England Fishery Management Council (NEFMC) and the Mid-Atlantic Fishery Management Council (MAFMC) to address bycatch of these species in federal Atlantic herring and Atlantic mackerel fisheries. The Councils set the annual catch cap for shad and river herring at 796,005 pounds for 2019. Under a new management action by the MAFMC (Framework 13), the catch cap in the Atlantic mackerel fishery is set to increase from the 2019 cap of 196,211 pounds to 284,396 pounds for 2020 and 2021. 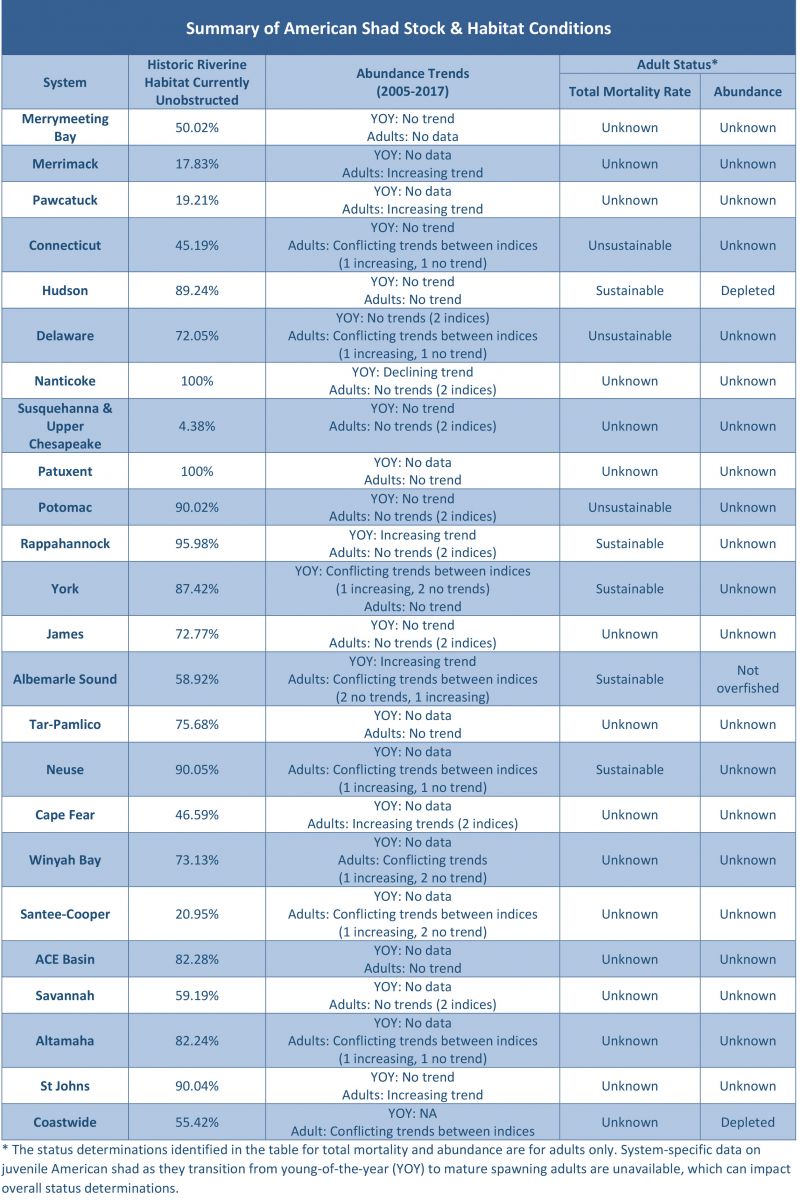 The 2020 American shad benchmark stock assessment is the most recent assessment for the American shad stock. Similar to the results of the 2007 assessment, the 2020 assessment found coastwide populations to be depleted. Multiple factors, such as overfishing, inadequate fish passage at dams, predation, pollution, water withdrawals, channelization of rivers, changing ocean conditions, and climate change are likely responsible for the decline from historic shad abundance levels. Additionally, the assessment found that shad recovery is limited by restricted access to spawning habitat, with 40% of historic habitat in the U.S. and Canada currently blocked by dams and other barriers. This may equate to a loss of more than a third of spawning adults.

The abundance status of American shad relative to historic levels is unknown for most systems, but was determined to be depleted in the Potomac and Hudson, and not depleted for the Albemarle Sound. Coastwide adult mortality is also largely unknown and juvenile mortality status cannot be determined due to insufficient data collection. The “depleted” determination was used instead of “overfished” because the impact of fishing on American shad stocks cannot be separated from the impacts of all other factors responsible for changes in abundance. The recovery of American shad will need to address multiple threats to shad including anthropogenic (human-caused) habitat alterations, predation by non-native predators, and exploitation by fisheries. The benchmark assessment was endorsed by the Peer Review Panel and accepted by the Board for management use in August 2020. The Board also tasked the Technical Committee with identifying potential paths forward to improve shad stocks given the results of the assessment.

The 2012 river herring benchmark stock assessment found that of the 52 stocks of alewife and blueback herring assessed, 23 were depleted relative to historic levels, one was increasing, and the status of 28 stocks could not be determined because the time-series of available data was too short. Estimates of abundance and fishing mortality could not be developed due to lack of data. The “depleted” determination was used instead of “overfished” and “overfishing” to indicate factors besides fishing have contributed to the decline, including habitat loss, predation and climate change.

The 2017 stock assessment update indicates that river herring remain depleted at near historic lows on a coastwide basis. Total mortality estimates over the final three years of the data time series (2013-2015) are generally high and exceed region-specific reference points for some rivers. However, there are some positive signs of improvement for some river systems. Total mortality estimates for 2 rivers have fallen below region-specific reference points during the final three years of the data time series, compared to the zero estimates that were below reference points at the end of the 2012 stock assessment data time series. Of the 54 stocks for which data were available, 16 experienced increasing abundance, 2 experienced decreasing abundance, 8 experienced stable abundance and 10 experienced no discernable trend in abundance over the final 10 years of the time series (2006-2015).

Recent American shad and river herring (alewife, blueback herring) stock assessments have highlighted that science and management could be improved by the development of a comprehensive genetic sampling repository, ongoing analysis of genetic samples with a standardized protocol, and a resultant database representing fish from throughout the Atlantic coast.

In response to these recommendations, the United States Geological Survey Eastern Ecological Science Center has partnered with ASMFC and allocated funding for development of an alosine genetic repository and to conduct genetic analyses to improve assessment and management. Specifically, the goals of this effort are:

Shad are managed under Amendment 3 to the Interstate Fishery Management Plan (FMP) for Shad and River Herring. Amendment 3 (2010) revised the American shad regulatory and monitoring programs in response to the 2007 American shad stock assessment, which found that most American shad stocks were at all-time lows and did not appear to be recovering. The Amendment requires states and jurisdictions to develop sustainable fishery management plans (SFMPs), which are reviewed by the Technical Committee and approved by the Board, in order to maintain commercial and recreational fisheries beyond January 2013. The following states have approved SFMPs for shad.

Amendment 3 also requires states and jurisdictions to submit a habitat plan regardless of whether their commercial fishery would remain open. The habitat plans outline current and historical spawning and nursery habitat, threats to those habitats, and habitat restoration programs in each of the river systems. They provide a river system-specific, comprehensive picture of major threats to American shad in each state to aid in future management efforts, and include collaboration with other state and federal agencies (e.g., state inland fish and wildlife agencies, water quality agencies, U.S Army Corps of Engineers). The two largest threats identified in the habitat plans were barriers to migration and a lack of information on the consequences of climate change. A key benefit of the habitat plans is that each river system relevant to shad now has its threats characterized. The habitat plans are filed with the Federal Energy Regulatory Commission to ensure that shad habitat is considered when hydropower dams are licensed. They are also shared with inland fisheries divisions to aid in habitat monitoring and restoration efforts. A majority of the habitat plans were approved by the Board in February 2014. Updates will be submitted for Board review and approval during 2021.

River herring are managed under Amendment 2 (2009) to the FMP for Shad and River Herring, which addresses concerns regarding declining river herring populations. Similarly to shad, the Amendment requires that states and jurisdictions develop SFMPs in order to maintain a commercial and/or recreational river herring fishery beyond January 2012. For 2019, approved River Herring SFMPs remain in effect for the states listed below. The remaining states and jurisdictions are required to prohibit commercial and recreational harvest.