Summer flounder (Paralichthys dentatus) are found in inshore and offshore waters from Nova Scotia, Canada to the east coast of Florida. In the U.S., they are most abundant in the Mid-Atlantic region from Cape Cod, Massachusetts to Cape Fear, North Carolina.

Summer flounder usually begin to spawn at age two or three, at lengths of about 10 inches. Spawning occurs in the fall while the fish are moving offshore. Spawning migration is linked to sexual maturity, with the oldest and largest fish migrating first. As in their seasonal migrations, spawning summer flounder in the northern portion of the geographic range spawn and move offshore (depths of 120 to 600 feet) earlier than those in the southern part of the range. Larvae migrate to inshore coastal and estuarine areas from October to May. The larvae, or fry, move to bottom waters upon reaching the coast and spend their first year in bays and other inshore areas. At the end of their first year, some juveniles join the adult offshore migration.

Adults spend most of their life on or near the sea bottom burrowing in the sandy substrate. Flounder lie in ambush and wait for their prey. They are quick and efficient predators with well-developed teeth allowing them to capture small fish, squid, sea worms, shrimp, and other crustaceans. 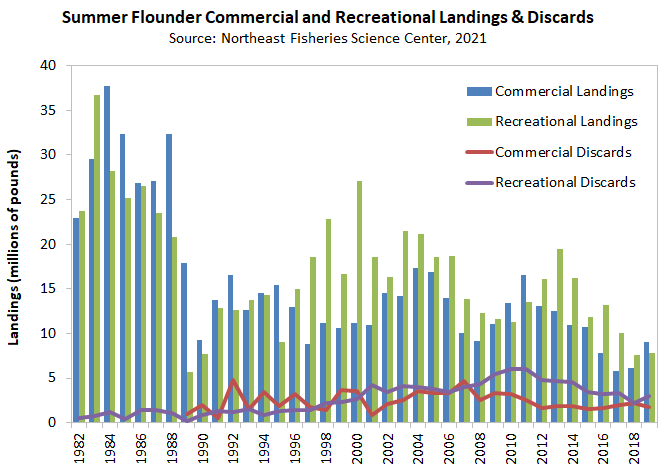 It is worth noting that the pandemic caused some significant challenges in data collection for both the commercial and recreational fisheries. NOAA Fisheries waived the requirement for vessels with Greater Atlantic fishing permits to carry a fishery observer from March until August. The 2020 commercial discard estimates will be affected by the missing observer data. In addition, the Access Point Angler Intercept Survey (APAIS) was suspended for several months in the spring and summer of 2020. APAIS is crucial for calculating estimates of recreational catch. 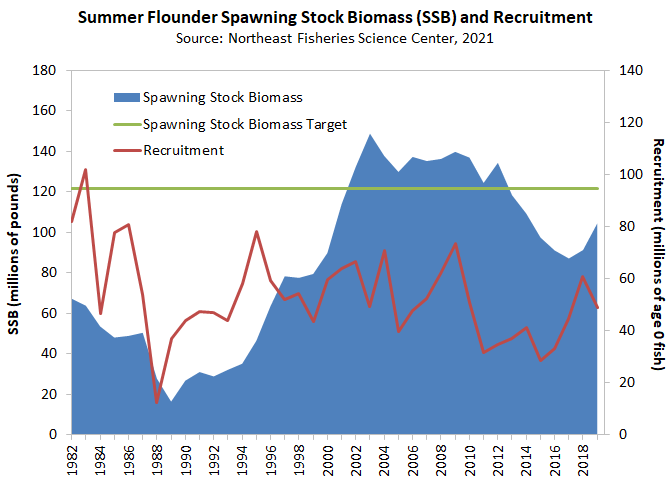 The 2021 management track stock assessment indicates that summer flounder is not overfished nor experiencing overfishing. Spawning stock biomass (SSB) is estimated at 104 million pounds, approximately 86% of the SSB target of 122 million pounds. Fishing mortality is estimated to be 0.340, below the fishing mortality threshold of 0.422. Recruitment was estimated at 49 million fish at age 0, below the time series average of 53 million fish at age 0.

Data analyzed by the Northeast Fisheries Science Center for the assessment indicate an expanded age structure relative to the stock observed in the 1980s and 1990s. However, the data also indicate that recruitment has remained generally below average this past decade, and the reason is not known. Additionally, the last benchmark stock assessment found the spatial distribution of the resource is continuing to shift northward and eastward. 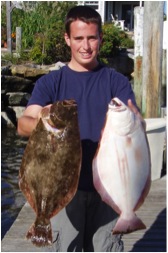 The Commission approved the first Fishery Management Plan (FMP) for Summer Flounder in 1982, followed by a similar FMP approved by the MAFMC in 1988. Since then, both agencies have made significant revisions to the plan, increasing the protection of juvenile fish and ensuring the maintenance of an adequate spawning population. This increased protection has been implemented through larger minimum size limits across all sectors, increased mesh sizes, and decreased recreational possession limits. Cumulatively, these changes have contributed to conserving the resource while maintaining important commercial and recreational fisheries. This is not to say that challenges in managing this species do not still exist. Issues related to sector allocation and annual harvest levels persist.

Recreational management has garnered a lot of attention in recent years. Under the current process, the Board and Council annually determines whether to implement coastwide measures or enact conservation equivalency. Conservation equivalency allows recreational management measures in federal waters measures to be waived, and instead requires recreational anglers to abide by the measures of the state in which they land their catch. In 2018, the Board approved Addendum XXXII which established an annual specifications process for developing recreational management measures under the conservation equivalency process. The Board approve regional measures in early spring each year, based on technical committee analysis of stock status, resource availability, and harvest estimates. Public input on specifications is gathered by states through their individual public comment processes. The specifications process provides the Board more flexibility in adjusting measures, if necessary, to constrain harvest to the annual coastwide recreational harvest limit (RHL). Further, the process enables the Board to consider a host of factors, including: regional equity; regulatory stability; species abundance and distribution; and late-breaking recreational harvest estimates.

In 2019, the Board and the Council jointly approved the Summer Flounder Commercial Issues Amendment. The Amendment revises the management program's goals and objectives specific to summer flounder and implements new state-specific commercial allocations. The revised management program's goals and objectives focus on ensuring biological sustainability of the resource, supporting and enhancing development of effective management measures, and optimizing social and economic benefits from the resource. These revisions were made to reflect current priorities in sustainably managing the resource.

The Board and Council has set new specifications for 2022 with a commercial quota of 15.53 million pounds and an RHL of 10.36 million pounds. These landing limits represents a 24% increase in the commercial quota and a 25% increase in the RHL from 2021 levels. In response to the increased RHL, the Board will work with states to review and approve new recreational measures in early 2022 for the 2022 fishing season. No changes were made to the commercial measures.

The Policy Board and MAFMC acknowledged this approach will not solve all recreational fisheries management challenges. With this in

mind, they agreed to continue refinement of the Percent Change Approach as well as two other options considered within the Draft Framework/Addenda, with particular emphasis on using improved statistical models to develop measures. Use of the approved Percent Change Approach will sunset no later than the end of 2025 with a goal of implementing a new and improved approach to managing the recreational fisheries by the beginning of 2026.