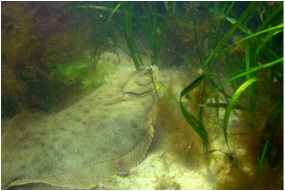 Winter flounder is an estuarine flatfish found in almost all shoal water habitats along the northwest Atlantic coast. The geographic distribution ranges from nearshore habitats to offshore fishing banks along the Atlantic coast of North America.

The name 'winter' flounder refers to their annual spawning migrations into nearshore waters in winter. Adults migrate in two phases; an autumn estuarine immigration prior to spawning, and a late spring/summer movement to either deeper, cooler portions of estuaries or to offshore areas after spawning. This pattern of seasonal distribution may change in colder waters at the northern extent of their range where winter flounder migrate to shallow waters in the summer and deeper waters in the winter. The annual spawning period varies geographically and although spawning periods overlap considerably, peak spawning times are earlier in southern locations.

During spawning, females release demersal (negatively or neutrally buoyant) adhesive eggs whose properties facilitate retention within spawning grounds. Many factors influence larval and juvenile growth and survival, including temperature, salinity, dissolved oxygen, and food availability. Nursery habitat for winter flounder larvae and juveniles is typically saltwater coves, coastal salt ponds, estuaries, and protected embayments; although larvae and juveniles have also been found in open ocean areas such as Georges Bank and Nantucket shoals. Larvae are predominantly found in the upper reaches of estuaries in early spring, moving into the lower estuary later in the season. 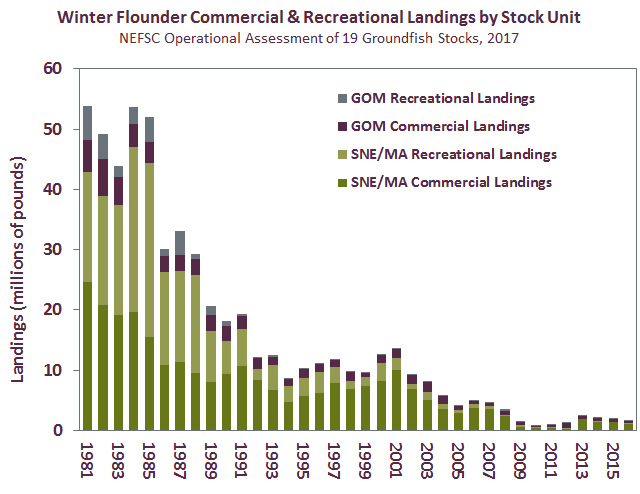 The winter flounder commercial fishery was once a highly productive industry with annual harvests up to 40.3 million pounds. Since the early 1980s, landings have steadily declined. Winter flounder is managed as three stocks; Georges Bank (GBK), Gulf of Maine (GOM), and Southern New England/Mid-Atlantic (SNE/MA). Total commercial landings for all three stocks combined dipped to 3.5 million pounds in 2010. Landings have risen since 2010 due to increased quotas in 2011 and 2012 in the GOM stock, and the lifting of the SNE/MA moratorium in 2013 by NOAA Fisheries. The states, however, have maintained a restrictive commercial trip limit of 50 pounds and a recreational bag limit of two fish in state waters of SNE/MA. Total commercial landings for all stocks combined reached 2.3 million pounds in 2017. Commercial harvest in SNE and GOM in 2017 was 1.11 million pounds and 432,180 pounds, respectively.

Recreational landings peaked in 1982 at 16.4 million pounds and have since maintained a declining trend. In 2017, recreational harvest in SNE and GOM was 8,820 pounds and 130,095 pounds, respectively. 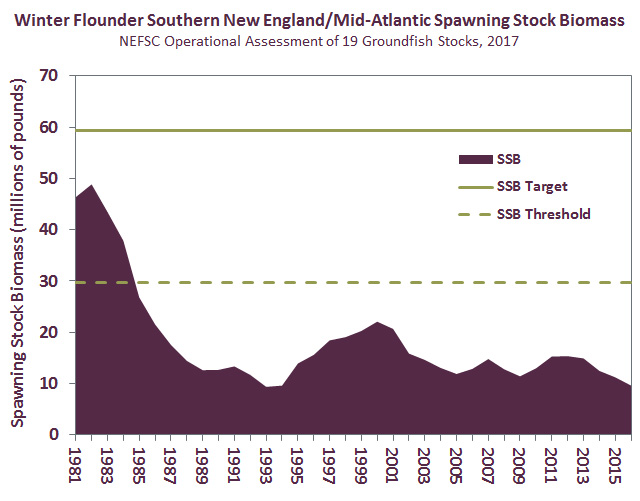 The 2017 SNE/MA operational stock assessment indicates the stock is overfished, but overfishing is not occurring. Spawning stock biomass (SSB) in 2016 was estimated to be 4,360 metric tons, which is 18% of the biomass target and 36% of the biomass threshold. The 2016 fishing mortality was estimated to be 0.21 which is 62% if the overfished threshold.

The Commission’s Amendment 1 (2005) and Addendum I (2009) are designed to protect spawning females migrating to inshore spawning grounds because they are easily located and caught when congregated for spawning. Amendment 1 established a minimum size limit, shortened seasons, and lowered trip/bag limits to reduce fishing pressure on spawning fish and rebuild the spawning stock biomass to target levels. Amendment 1 complemented Amendment 13 and Framework 42 to the Groundfish FMP.

Based on the results of the 2008 benchmark stock assessment, which estimated the SNE/MA stock at 9% of the target biomass, the Winter Flounder Management Board (Board) initiated Addendum I, the Secretary of Commerce prohibited retention of SNE/MA winter flounder through interim action in federal waters, and the Council included measures to incorporate the assessment results into Amendment 16 to the Groundfish FMP (Amendment 16). Rather than prohibit possession, which would result in increased discard mortality and loss of fishery-dependent data, the Commission opted to establish bycatch-only possession limits for the SNE/MA stock in state waters. Addendum I limits recreational fishermen to 2 fish and commercial fishermen can land a maximum of 50 pounds (or 38 fish) in the SNE/MA; these regulations remain in place today. Addendum I also required states to reduce GOM recreational fishing mortality by 11% and established a 250 pound commercial trip limit.

The Board approved Addendum II (2012) to modify the commercial and recreational management requirements for the GOM stock. Specifically, the commercial trip limit was increased to 500 pounds per trip and the recreational season was expanded to encompass the entire year. In May 2013, the Board passed Addendum III for the GOM and SNE/MA fisheries in order to annually set commercial and recreational specifications. These specifications may be set for up to 3 years, and may be revised if new information is released within the 3 year period.