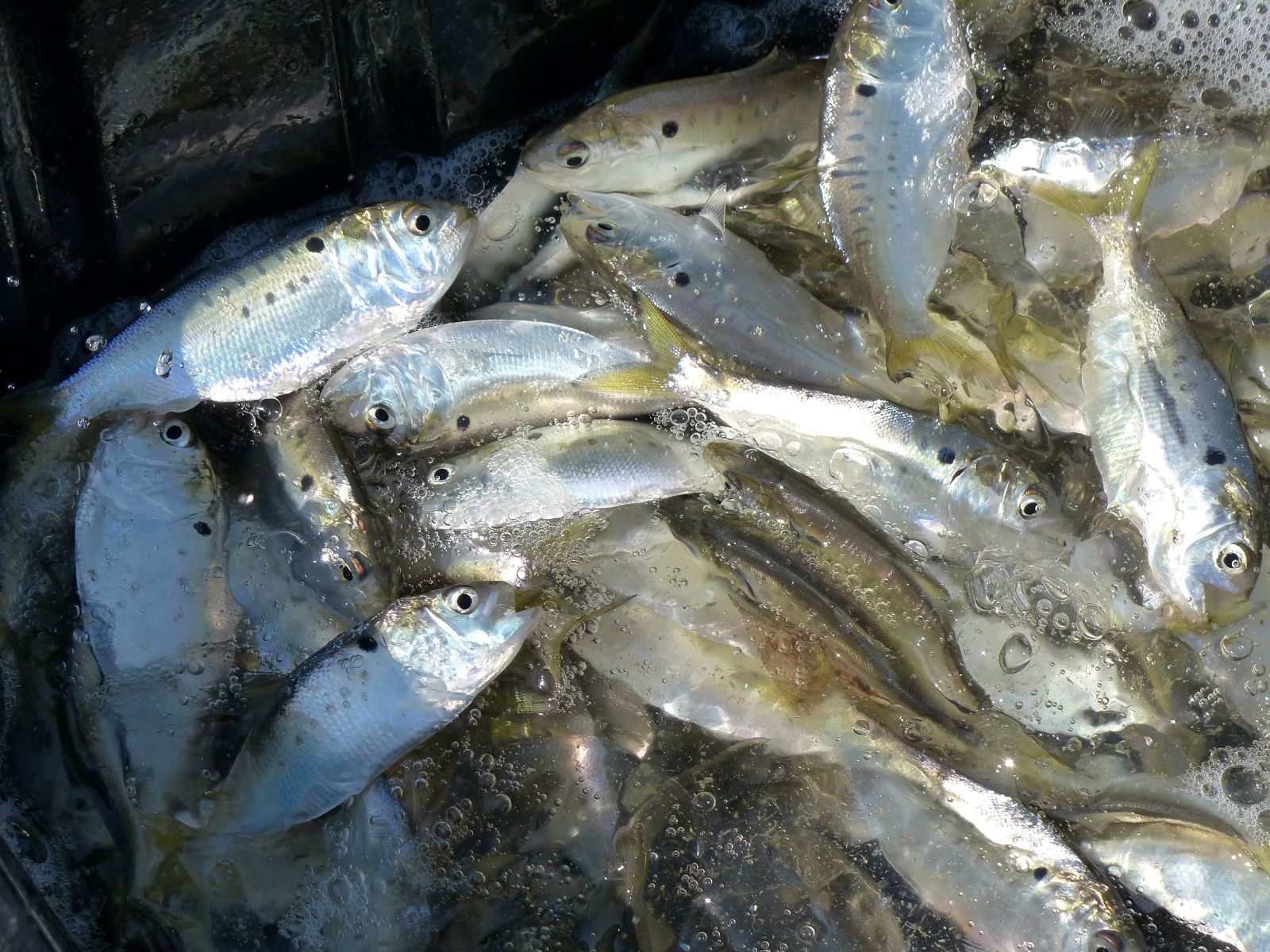 Atlantic menhaden (Brevoortia tyrannus) occupy estuaries and coastal waters from Nova Scotia to northern Florida and are believed to consist of a single population. Adult and juvenile menhaden form large, near-surface schools, primarily in estuaries and nearshore ocean waters from early spring through early winter. By summer, menhaden schools stratify by size and age along the coast, with older and larger menhaden found farther north. During fall-early winter, menhaden of all sizes and ages migrate south around the North Carolina capes to spawn.

Sexual maturity begins as early as age one to just before age three, with major spawning areas from New Jersey to the Carolinas. The majority of spawning primarily occurs offshore (20-30 miles) during winter. Buoyant eggs hatch at sea, and larvae are carried into estuarine nursery areas by ocean currents. Juveniles spend most of their first year in estuaries, migrating to the ocean in late fall.

Menhaden are very efficient filter feeders. Water is pushed through specialized gill rakers that are formed into a basket that allows them to capture plankton. Menhaden are an important component of the food chain, providing a link between primary production and higher organisms by consuming plankton and providing forage for species such as striped bass, bluefish, and weakfish, to name just a few. 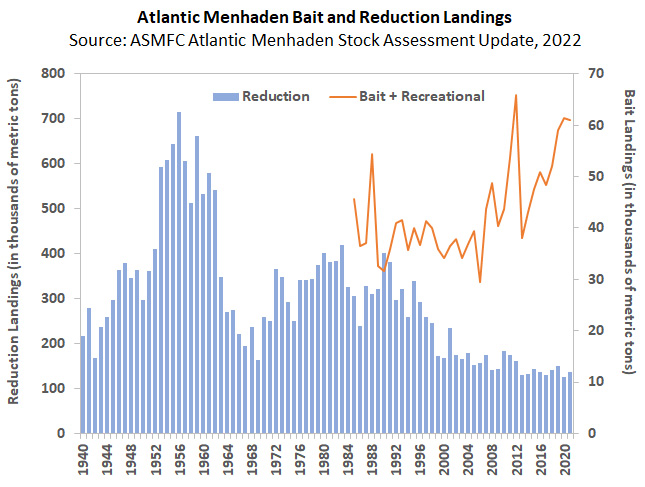 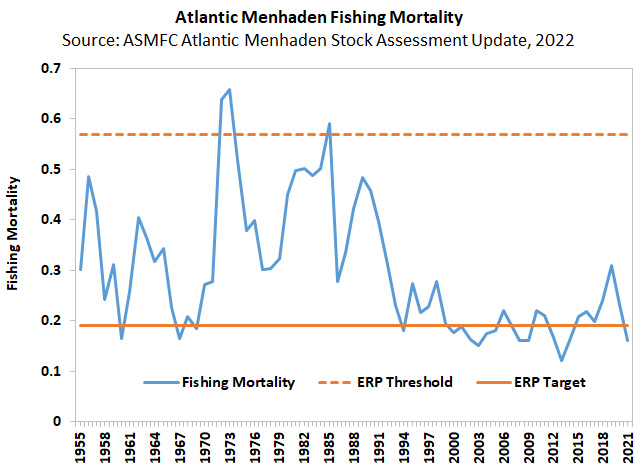 The Atlantic menhaden commercial fishery consists of a reduction fishery (named because it "reduces" the whole fish into fish meal, fish oil, and fish solubles) and a bait fishery. The reduction fishery first began in New England during the early 1800s and spread south after the Civil War. The reduction fishery grew with the advent of purse seines in the mid-1800s and reached peak landings in 1956 at 712,100 metric tons (mt). At the time, over 20 menhaden reduction factories ranged from southern Maine to northern Florida. In the 1960s, the Atlantic menhaden stock contracted geographically, and many of the reduction factories north of the Chesapeake Bay closed due to a scarcity of fish. Consequently, reduction landings dropped to 161,000 mt in 1969. In the 1970s and 1980s, the menhaden population began to expand (primarily due to a series of above average year classes entering the fishery), and reduction landings rose to around 300,000-400,000 mt. Adult menhaden were again abundant in the northern half of their range and, as a result, reduction factories in Canada and New England began processing menhaden again by the mid-1970s. However, by 1989 all shore-side reduction plants in New England had closed, mainly because of odor abatement regulations.

During the 1990s, the Atlantic menhaden stock contracted again, largely due to a series of poor to average year classes. Over the next decade, several reduction plants consolidated or closed, resulting in a significant reduction in fleet size and fishing capacity. By 2006, there was only one remaining reduction plant in operation on the Atlantic coast processing menhaden into fishmeal and oil. This is the Omega Protein plant, located in Reedville, Virginia, which is still operational today. In 2021, roughly 137 thousand mt were landed for reduction purposes.

Commercial landings in 2021, including reduction, bait, bycatch, and episodic event landings, were 195,092 mt, which represents a 6% increase in landings from 2020. 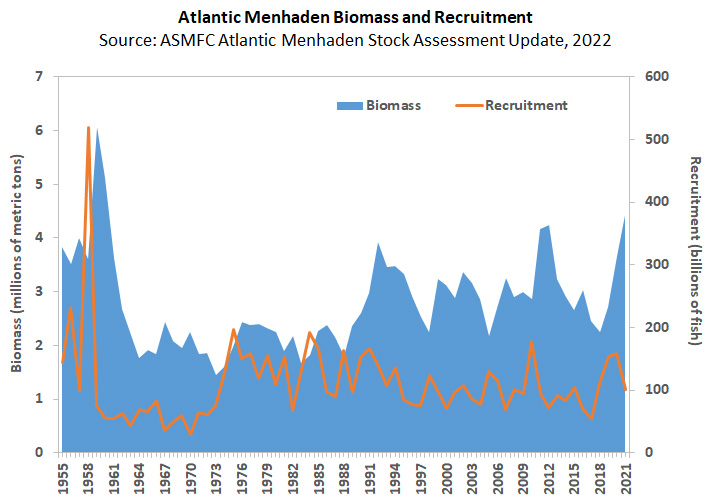 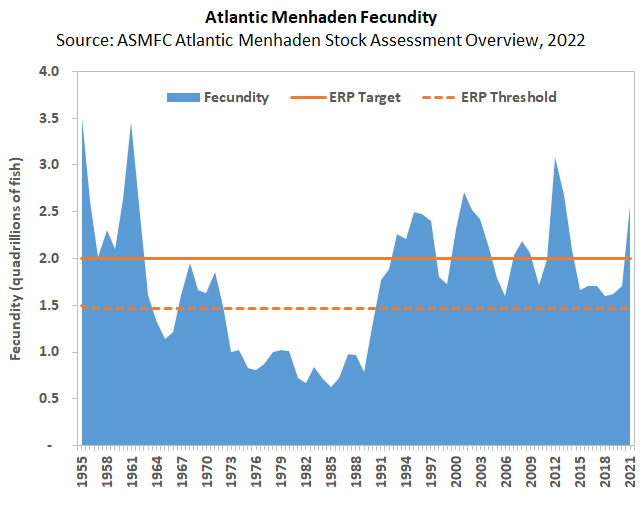 In February 2020, the Board accepted the results of the Atlantic Menhaden Single-Species and Ecological Reference Point (ERP) Assessments and Peer Review Reports for management use. The single-species assessment acts as a traditional stock assessment using the Beaufort Assessment Model (BAM), and indicates the stock is not overfished or experiencing overfishing relative to the current single-species reference points. The ERP assessment evaluates the health of the stock in an ecosystem context, and indicates that the fishing mortality (F) reference points for menhaden should be lower to account for menhaden’s role as a forage fish. The ERP assessment uses the Northwest Atlantic Coastal Shelf Model of Intermediate Complexity for Ecosystems (NWACS-MICE) to develop Atlantic menhaden ERPs. NWACS-MICE is an ecosystem model that focuses on four key predator species (striped bass, bluefish, weakfish, and spiny dogfish) and three key prey species (Atlantic menhaden, Atlantic herring, and bay anchovy). These species were chosen because diet data indicate they are top predators of Atlantic menhaden or are key alternate prey species for those predators. A more detailed overview of the stock assessments is available here. This tool allows managers to evaluate the tradeoffs between Atlantic menhaden harvest and predator abundance to set reference points that take into account menhaden’s role as a forage fish.

In August 2020, the Board approved the following ERPs in the management of Atlantic menhaden:

ERP target: the maximum fishing mortality rate (F) on Atlantic menhaden that sustains Atlantic striped bass at their biomass target when striped bass are fished at their F target

Atlantic striped bass was the focal species for the ERP definitions because it was the most sensitive predator fish species to Atlantic menhaden harvest in the model, so an ERP target and threshold that sustained striped bass would likely provide sufficient forage for other predators under current ecosystem conditions. For the development of the ERPs, all other focal species in the model (bluefish, weakfish, spiny dogfish, and Atlantic herring) were assumed to be fished at 2017 levels.

In August 2022, the Board accepted the results of the Single-Species Update Assessment. Under the ERPs, Atlantic menhaden are neither overfished nor experiencing overfishing. In 2021, population fecundity (FEC), a measure of reproductive capacity of the population, was above the ERP threshold and target (FEC2021/FECERPThreshold = 1.76; FEC2021/FECERPTarget = 1.28), and fishing mortality (F) was below the ERP overfishing threshold and target (F2021/FERPThreshold = 0.28; F2021/FERPTarget = 0.85). A more detailed overview of the stock assessment update can be found here. 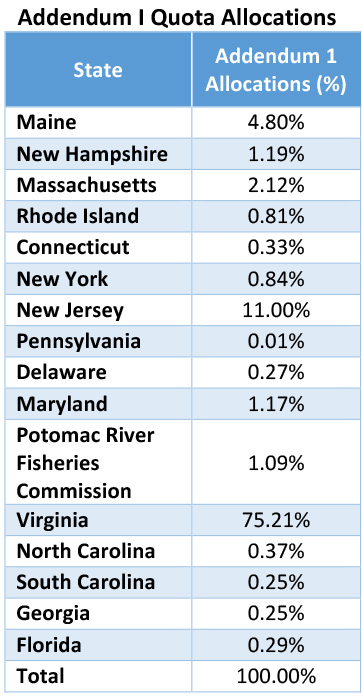 Atlantic menhaden are currently managed under Addendum I to Amendment 3 to the Interstate Fishery Management Plan (FMP). Addendum I addresses commercial allocations, the Episodic Event Set Aside (EESA) Program, and the Incidental Catch/Small-Scale Fishery (IC/SSF) Provision.. Regarding allocations, the Addendum creates a three-tiered system for minimum allocations to the states, with Pennsylvania receiving 0.01%; South Carolina, Georgia, Connecticut, Delaware, North Carolina, and Florida receiving 0.25%; and the remaining states continuing to receive a minimum of 0.5%. Furthermore, the Addendum allocates the remainder of the TAC, excluding the 1% for episodic events in the states of New York through Maine under the EESA Program, on a state-by-state basis based on landings history of the fishery from 2018, 2019, and 2021. Under the IC/SSF provision, the Addendum codifies the ability for states to elect to divide their quotas into sectors, enabling individual sectors to enter into the provision at different times. Additionally, the Addendum removes purse seines as a permitted small-scale directed gear, thereby, prohibiting them from harvesting under the IC/SSF provision. Finally, the Addendum counts IC/SSF landings against the TAC and if IC/SSF landings cause the TAC to be exceeded, then the Board must take action to modify one or both of permitted gear types and trip limits under the provision. The Addendum also continues to prohibit the rollover of unused quota, maintains the 6,000 pounds trip limit for applicable gear types following the closure of a directed fishery, and keeps the current Chesapeake Bay Cap, which was first implemented in 2006 to limit the amount of reduction harvest within the Bay, at 51,000 mt. Th recognizes the importance of the Chesapeake Bay as nursery grounds for many species by capping reduction landings from the Bay to current harvest levels.

The current TAC for the 2023 through 2025 fishing seasons is 233,550 mt, which is an approximate 20% increase from the 2021-2022 TAC based on the positive stock status of the resource under ecological reference point-based management. According to Technical Committee analysis, this increase has a less than 40% probability of exceeding the target set by the ecological reference points (ERPs) adopted in 2020. Given the positive results of the 2022 Stock Assessment Update, the Board approved this modest increase to provide additional fishing opportunities, while maintaining a conservative risk level of exceeding the ERP target.