Northern shrimp (Pandalus borealis) is a crustacean located in the cold waters of the Northern Hemisphere. On the U.S. Atlantic coast, the Gulf of Maine is considered the southernmost extent of the species range. Northern shrimp are hermaphroditic, maturing first as males at roughly 2 1/2 years of age and then transforming to females at about 3 1/2 years. Female shrimp may live up to five years old and attain a size of up to three to four inches in length. Differences in size at age by area and season can be ascribed to temperature effects, with more rapid growth rates at higher temperatures. Differences in size at age from year to year, and in size at sex transition, have been attributed to both environmental and stock density effects.

Spawning takes place in offshore waters during the late summer. By early fall, most adult females extrude their eggs onto the abdomen. Egg-bearing females move inshore in late autumn and winter, where the eggs hatch. Northern shrimp are an important link in marine food chains, preying on both plankton and benthic invertebrates and, in turn, being consumed by many important fish species, such as cod, redfish, and silver and white hake. 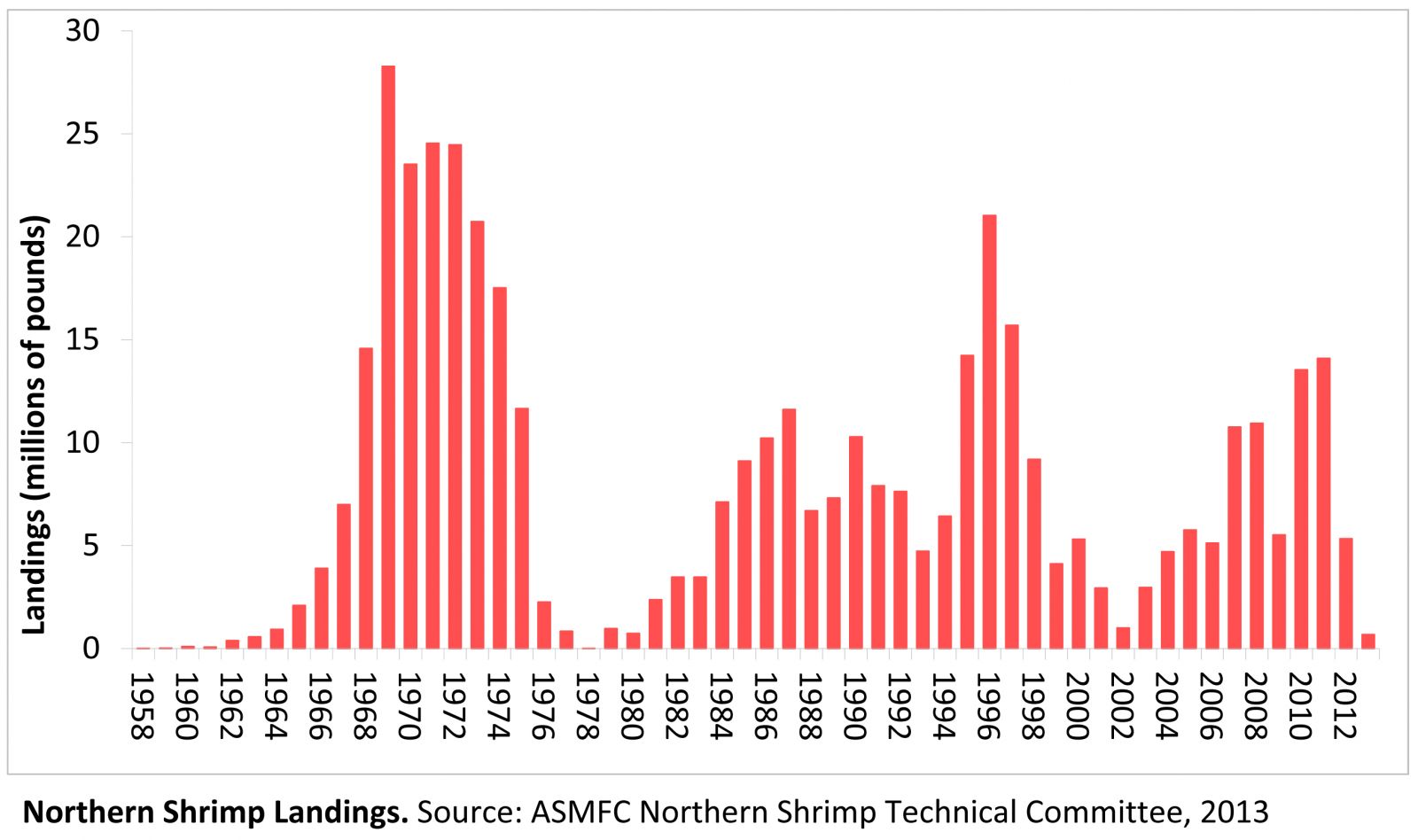 Historically, northern shrimp have provided a small but valuable fishery to the New England states. The fishery is seasonal in nature, peaking in late winter when egg-bearing females move into inshore waters and ending in the spring under regulatory closure.

The commercial fishery began in the late 1950s and soon experienced an incredible expansion in landings, peaking in 1969 at 28.3 million pounds. Over the next decade, landings dropped precipitously and the fishery closed in 1978 due to stock collapse. The fishery reopened in 1979 and produced stable landings through the 1990’s (peeks in landings occurred in 1987 and 1996 at an estimated 11.6 million pounds and 20.1 million pounds, respectively). In 2002, landings declined to 992,250 pounds, the lowest levels observed since the 1978 closure, but landings again increased to an average of 7.9 million pounds during 2003-2012. In 2010, however, the proposed 180-day season was cut short with 13.5 million pounds landed due to the industry exceeding the recommended landings cap for that year, and concerns about small shrimp. The season was similarly cut short in 2011, and the 2012 season was further restricted with gear-specific seasons, landings days, and trip limits. The total allowable catch (TAC) was set at 4.9 million pounds and would close when the projected landings reached 95% of the TAC. The season closed on February 17, resulting in a 21-day trawler season and a 17-day trap season.

The 2013 season, which was classified as a “do no harm” fishery, resulted in a fishing mortality rate (0.53) above the target (0.38). This was despite the fact that only 49% of the total allowable catch was harvested (676,935 pounds of 1.39 million pounds). Due to recruitment failure and a collapsed stock, a fishery moratorium has been in place since 2014. 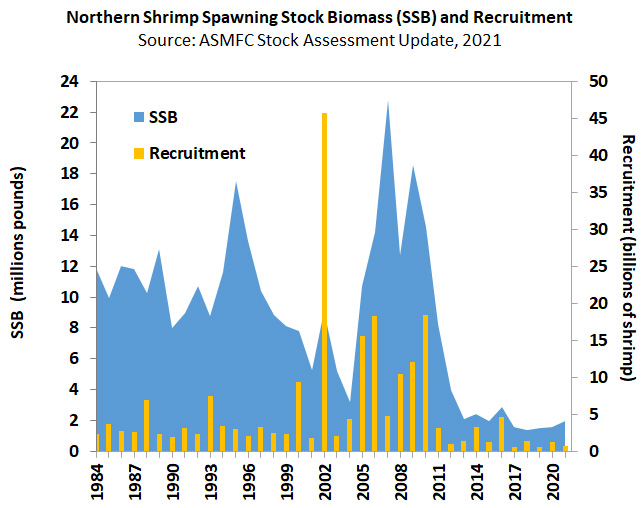 The 2021 Stock Assessment Update indicates the northern shrimp stock in the Gulf of Maine remains in a depleted condition. Biomass is at extremely low levels and has been since 2013. Spawning stock biomass (SSB) in 2021 is estimated at 887 mt, well below the time series median of 4,037 mt and the 1984-2017 20th percentile of 2,140 mt. In addition, recruitment continues to be low, with the 2016, 2018, and 2020 year classes being the lowest in the time series. Fishing mortality has been very low in recent years due to the moratorium, but high levels of natural mortality and low recruitment have hindered rebuilding.

Recruitment of northern shrimp is related to both SSB and ocean temperatures, with higher SSB and colder temperatures producing stronger recruitment. Ocean temperatures in western GOM shrimp habitat have increased over the past two decades and have sustained unprecedented highs in the past ten years. While 2014 and 2015 temperatures were cooler, temperatures are predicted to continue rising as a result of climate change. This suggests an increasingly inhospitable environment for northern shrimp and the need for strong conservation efforts to help restore the stock. The Northern Shrimp Technical Committee considers the stock to be in poor condition with limited prospects for the near future. 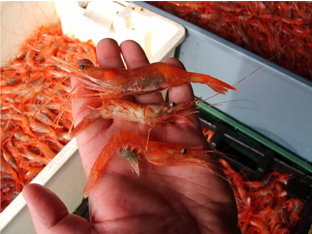 The Commission’s Northern Shrimp Section is comprised of the states of Maine, New Hampshire, and Massachusetts. The original Fishery Management Plan was adopted by the Commission in 1986. Amendment 1 (2004) established biological reference points for the first time in the shrimp fishery and expanded the tools available to manage the fishery. Management of northern shrimp under Amendment 1 resulted in a rebuilt stock and increased fishing opportunities. However, early season closures occurred in 2010 and 2011 because landing rates were far greater than anticipated. Furthermore, untimely reporting resulted in short notice of the season closures and an overharvest of the recommended total allowable catch (TAC).

To address these issues, Amendment 2 (2011) completely replaced the FMP and provided management options to slow catch rates throughout the season, including trip limits, trap limits, and days out of the fishery. Additionally, the amendment modified the fishing mortality reference points to include a threshold level, included a more timely and comprehensive reporting system, and allowed for the initiation of a limited entry program to be pursued through the adaptive management process. Addendum I (2012) clarified the annual specification process, introduced a research set aside provision, and allocated the TAC with 87% for the trawl fishery and 13% for the trap fishery based on historical landings by each gear type.

Due to the stock collapse in 2013, the Northern Shrimp Section implemented a commercial fishing moratorium for the 2014 fishing season which it has maintained through 2024. In 2017, the Commission approved Amendment 3 which is designed to improve management of the fishery in the event that it reopens. Specifically, the Amendment refines the FMP objectives and provides the flexibility to use the best available information to define the status of the stock and to set the total allowable catch. Furthermore, the Amendment implements a state-specific allocation program to better manage effort in the fishery; 80% to Maine, 10% to New Hampshire, 10% to Massachusetts. The amendment also  strengthens catch and landings reporting requirements, implements mandatory use of size sorting grate systems to minimize harvest of small (presumably male) shrimp, incorporates accountability measures, specifies a maximum fishing season length, and formalizes fishery-dependent monitoring requirements. The following year, the Section approved Addendum I, which provides states the authority to allocate their state-specific quota between gear types.

In December 2021, the Section extended the moratorium on commercial and recreational fishing through 2024. This three-year moratorium was set in response to the low levels of biomass and recruitment and the fact that, should recruitment improve, it would take several years for those shrimp to be commercially harvestable. At this meeting, the Section also tasked the management strategy work group with further developing a management option for recreational fishing that allows for the personal consumption of harvested shrimp. In addition, the work group was directed to explore how the northern shrimp fishery would be managed if the Commission relinquished control of the fishery management plan. Since future funding for the summer shrimp survey remains uncertain, the Section also tasked the work group with discussing options for maintaining stock assessment updates without the data that this survey provides. The work group will continue to discuss these topics in consultation with representatives from the National Marine Fisheries Service, the Commission’s Interstate Fisheries Management Program Policy Board, the Northern Shrimp Technical Committee, and the Northern Shrimp Advisory Panel.