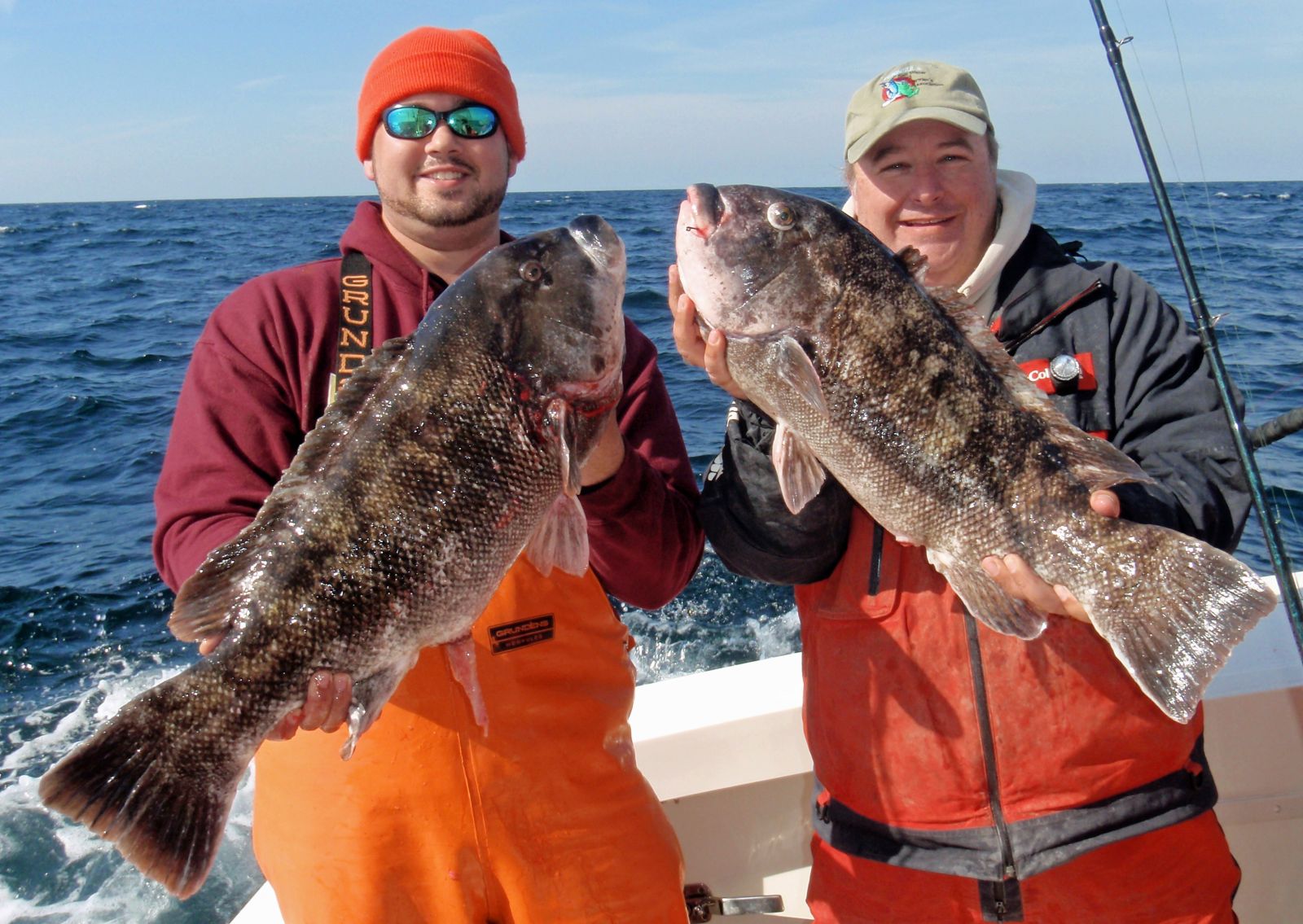 A member of the wrasse (Labridae) family, tautog are stout fish with an arched head and broad tail. Juveniles are greenish in color and become darker with age. Distributed along the Northeast Atlantic coast from Nova Scotia to Georgia, tautog are most abundant from Cape Cod to Chesapeake Bay. Seasonal migration varies throughout the species’ range. In the north, adults move from offshore wintering grounds in the spring to nearshore spawning and feeding areas in the fall, reversing their migration as water temperatures drop from fall to winter. In the south, tautog undergo a shorter seasonal migration and in some areas may remain either inshore or offshore year round. When water temperatures are very low, adults become torpid or lethargic, possibly allowing tautog to survive cold winter conditions, a unique trait compared to other wrasse species which typically inhabit tropical waters.

Tautog prey primarily on oysters, blue mussels, and other shellfish, using large teeth to crack and crush shells. Juveniles feed on small benthic and pelagic invertebrates such as amphipods and copepods. Adults stay close to their preferred home site and although they may move away during the day to feed, they return to the same general location at night where they become dormant and may actually sleep. There are no species that preferentially feed on tautog, but birds such as cormorants prey on juveniles. Smooth dogfish, barndoor skate, red hake, silver hake, sea raven, and goosefish have been reported to feed on both adults and juveniles.

Tautog are sexually mature at three to four years of age and can live for more than 30 years. Throughout their life, tautog aggregate around structured habitats in estuaries and inlets to offshore reefs. Shallow, vegetated inshore areas serve as juvenile nurseries, while larger juveniles cohabitate with adults in deeper offshore waters. North of Long Island, tautog are generally found around rocks and boulders. Toward the southern end of their range, tautog often inhabit wrecks, jetties, natural and artificial reefs, and shellfish beds. This aggregation around structure makes tautog easy to find and catch, even when biomass levels are low. 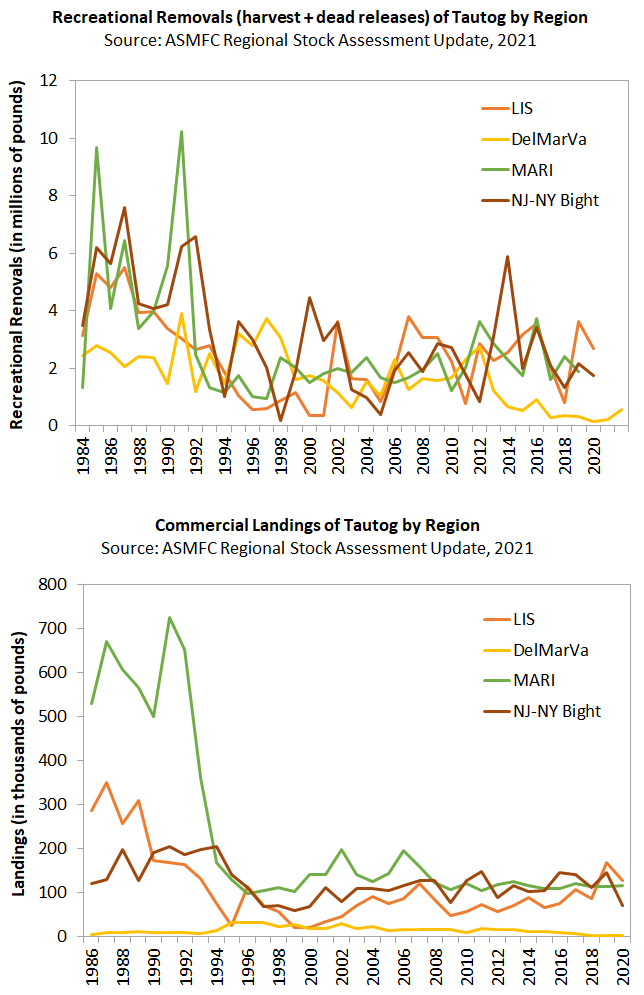 While tautog are targeted by both commercial and recreational fisheries, over 90% of the total harvest comes from the recreational fishery, with a majority of landings occurring in state waters. Most tautog are landed in the spring and fall, although some Mid-Atlantic anglers pursue tautog year-round, and there is an active fishery off the Virginia coast in the winter. Historically, tautog were considered a “trash fish” until the late 1970s when demand increased and a directed commercial fishery developed. Landings quickly rose, peaking in 1987 at nearly 1.2 million pounds, then rapidly began to decline as states implemented commercial regulations starting in the early 1990s. Landings have remained at approximately the same level for the past 30 years.

Commercial landings in 2020 were approximately 313,400 pounds, 5% of the total (commercial and recreational) coastwide harvest. The ex-vessel price (dollars per pound) for tautog has steadily increased since the late 1970s with coastwide average price in 2020 at approximately $3.45 per pound. A majority of 2020 commercial landings (58%) occurred in New York followed by Massachusetts (20%). The fish is sold in both fresh and live markets in Northeast cities, with steady demand increasing the price for live tautog in recent years. The higher price and interest in undersized fish has led to significant illegal harvest.

Recreational harvest occurs primarily in the fall from September– December, with green and Jonah crabs the bait of choice for many anglers. Over the past 40 years, coastwide recreational harvest has ranged from a high of over 20 million pounds in 1986 to a low of 3.4 million pounds in 2018. Harvest in 2020 was estimated at 6.2 million pounds. At the state level, New York (28%) and Connecticut (22%) harvested the most tautog in 2020, though high harvesting states have included New Jersey and Rhode Island in recent years. While harvesting at much lower levels, fisheries in the states of Delaware through Virginia are primarily recreational. Coastwide recreational discards have increased over time, with an estimated 14.6 million fish discarded in 2020. A discard mortality rate of 2.5% is assumed for the recreational fishery, resulting in an estimated 365,000 recreational dead discards or 17% of recreational removals.

In 2021, a Regional Stock Assessment Update was completed, using the same assessment methodology that was approved for management use as part of the 2016 Regional Benchmark Stock Assessment and subsequently used in the 2017 update. The 2021 Stock Assessment Update found improvements in most regions. Stocks within the Long Island Sound (LIS) and Delaware/ Maryland/Virginia (DelMarVa) regions are not overfished, with improved stock status for both regions from the last assessment in 2017. For LIS, New Jersey/New York Bight (NJ-NYB), and DelMarVa, fishing mortality also decreased with the stock not experiencing overfishing in any regions; also an improvement from the previous assessment. In the Massachusetts and Rhode Island (MARI) region, stock status remains unchanged with the stock not overfished nor experiencing overfishing.

Each regional assessment used information through 2020, including calibrated recreational data from the Marine Recreational Information Program (MRIP). In addition to regional indices of abundance from fishery-independent surveys, a catch per unit effort index was developed using MRIP data for each region because tautog are not easily sampled by standard fishery-independent surveys. The new MRIP estimates resulted in higher estimates of spawning stock biomass (SSB) and recruitment in all regions, but had less of an impact on fishing mortality.

The regional assessments for MARI and LIS indicated strong year classes in recent years have contributed to increasing trends in SSB. In the DelMarVa region, landings and fishing mortality have declined significantly since 2012, resulting in an increase in SSB over the time period. While the NJ-NYB region remains overfished, the SSB has been trending upward since the last assessment update.

A more detailed overview of the tautog regional stock assessment update can be found in the Stock Assessment Update Overview.

Tautog is managed under Amendment 1 (2017) to the Fishery Management Plan, which delineated the stock into four regions due to differences in biology and fishery characteristics, and limited coastwide movement. Based on these delineations, the Amendment established new regional biological reference points, fishing mortality targets, and stock rebuilding schedules, and required each region to implement measures that have at least a 50% probability of achieving the regional fishing mortality target. If the current fishing mortality exceeds the regional threshold, the Board must initiate corrective action within one year.

The 2017 assessment update found that all regions except MARI were overfished, and overfishing was occurring in the LIS and NJNYB regions. As such, Amendment 1 required the LIS region to reduce harvest by at least 20.3%, and the NJ-NYB region to reduce harvest by at least 2%. The MARI and DelMarVa regions were not required to reduce harvest, but adjusted their regulations to establish consistent measures across all the states within each region where possible. In considering the improved results of the 2021 Regional Assessments Update, the Board chose to not make any management changes at this time since no regions are experiencing overfishing.

Amendment 1 also established a commercial harvest tagging program to address the pervasive issue of illegal harvest of undersized and unreported tautog. Under the tagging program, all states within the management unit must require commercially permitted harvesters to tag all tautog at the time of harvest or prior to offloading. Tautog must be landed in the state that is identified on the tag. The selected tags are non-lethal and are applied to fish intended for both live and fresh markets. State implementation of the tagging program began in 2020.