American eel (Anguilla rostrata) are a catadromous fish species, spending most of their life in freshwater or estuarine environments, traveling to the ocean as adults to reproduce and die. Sexually maturing eel migrate to spawning grounds located in the Sargasso Sea, a large portion of the western Atlantic Ocean east of the Bahamas and south of Bermuda. American eel are a panmictic stock, meaning that individuals from the entire range come together to reproduce. American eel found along the eastern coast of Mexico are from the same population as eel found in the St. Lawrence River in Canada.

In August 2018, a Symposium on American Eel titled, "Aristole's Mud to Modern Day: What Do We Actually Know About Catadromous Eels?" was held at the American Fisheries Society's Annual Meeting in Atlantic City, New Jersey. A link to the abstracts and presentations is included here. 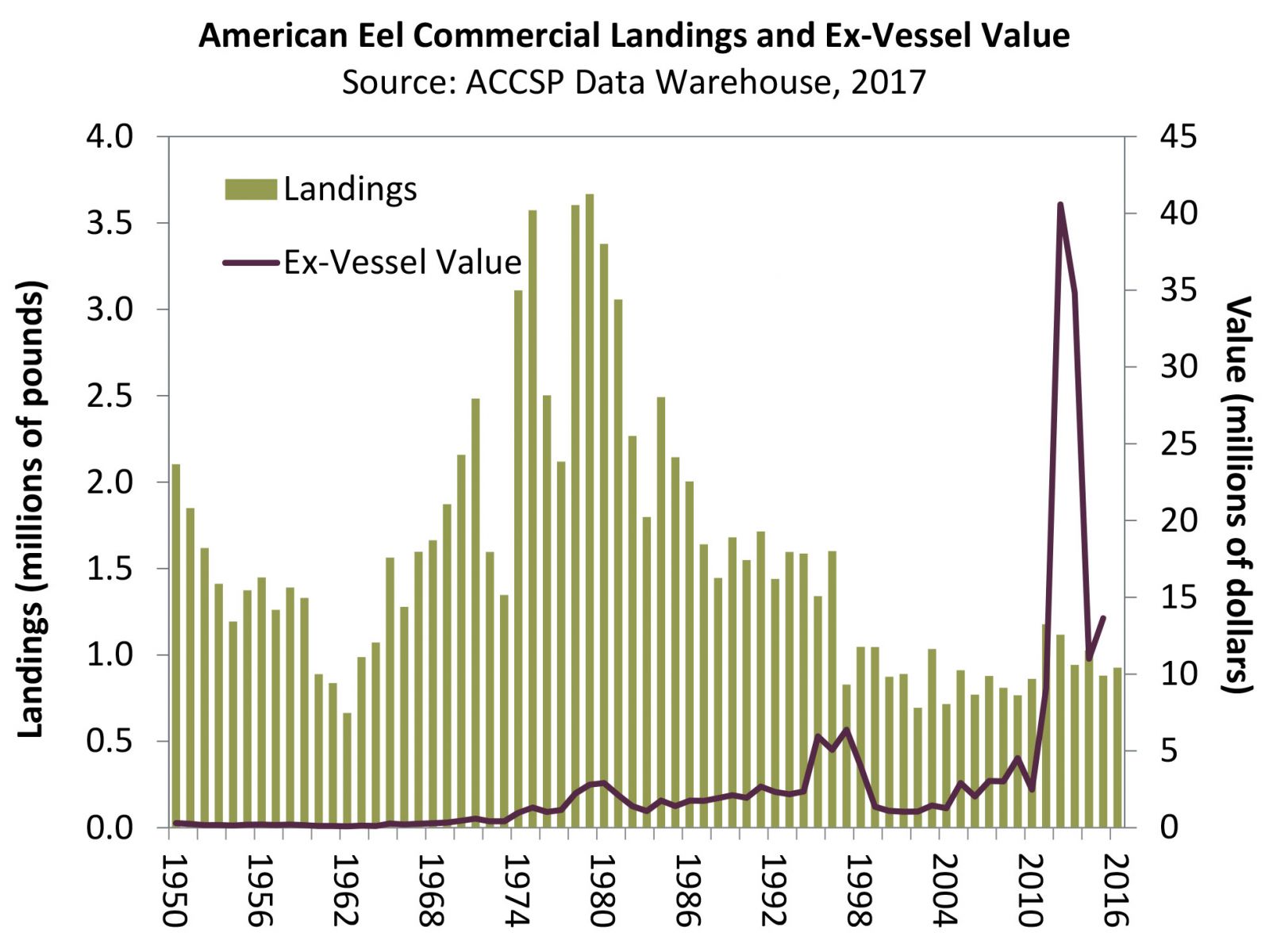 American eel are an important resource from both a biodiversity and human use perspective. They serve as an important prey species for many fish, aquatic mammals and fish-eating birds. Although fisheries are a fraction of what they were historically, eel support valuable commercial, recreational and subsistence fisheries.

Since 2011, there has been a growing international demand for glass eels (an early life stage of American eel) for aquaculture purposes, which has increased landings and the price per pound of glass eels. In 2018, total glass eel harvest from Maine and South Carolina remained below Maine’s quota.

From a biological perspective, much is still unknown about the species. Information is limited about their abundance, status at all life stages, and habitat requirements. According to the 2017 stock assessment update, the American eel population remains depleted in U.S. waters. The stock is at or near historically low levels due to a combination of historical overfishing, habitat loss, food web alterations, predation, turbine mortality, environmental changes, toxins and contaminants, and disease. The assessment updates the 2012 American Eel Benchmark Stock Assessment with data from 2010-2016. Trend analyses of abundance indices indicated large declines in abundance of yellow eels during the 1980s through the early 1990s, with primarily neutral or stable abundance from the mid-1990s through 2016. Total landings remain low but stable. Based on these findings, the stock is still considered depleted. No overfishing determination can be made based on the analyses performed.

In 2011, the U.S. Fish and Wildlife Service (USFWS) initiated a status review of American eel under the Endangered Species Act (ESA) to assess the health of the population and the magnitude of threats facing the species. On October 7, 2015, USFWS announced that the American eel is stable and does not need protection under the ESA. Nonetheless, for the species’ long-term stability, the agency recommends continuing efforts to maintain healthy habitats, monitor harvest levels, and improve river passage for migrating eels. In 2014, the International Union for the Conservation of Nature (IUCN) listed American eel as “Endangered” on the Red List.  The IUCN assesses flora and fauna globally to determine their conservation status (not evaluated to extinct). While the IUCN list has no legal implications, it is an important metric that accounts for a variety of factors including habitat, threats, potential stresses, and research status. Given these findings, and recent actions taken by the Commission and its member states, the Commission remains committed to closely monitoring American eel fisheries and the status of the resource, and making adjustments to the management program as necessary, to ensure stock rebuilding. 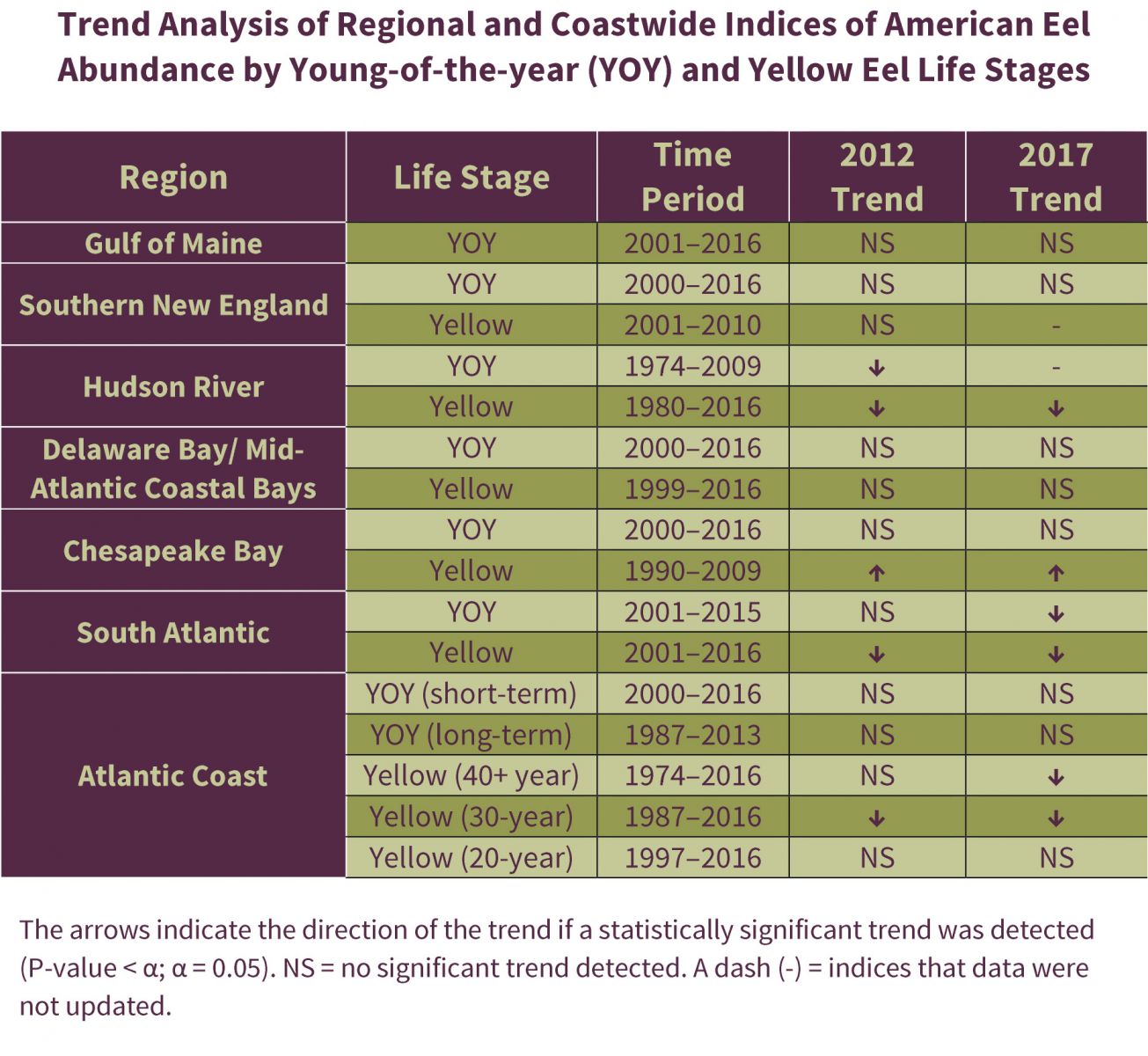 American eel are a challenging species to conserve and manage for a number of reasons. During its life-span the American eel navigate through and reside in a wide range of habitats, from the oceanic waters of the Sargasso Sea to the brackish waters of coastal estuaries and the inland freshwater river systems. Throughout this journey, American eel inhabit areas under a myriad of management authorities, from international to multiple federal, state and local governments. Life history characteristics such as late age of maturity and a tendency to aggregate during certain life stages further confound conservation efforts.

American eel are managed by the Commission in territorial seas and inland waters along the Atlantic coast from Maine to Florida. Increasing demand for eel by Asian markets and domestic bait fisheries, coupled with concern about declining eel abundance and limited assessment data, spurred development of the first Interstate Fishery Management Plan (FMP) for American Eel in the mid-1990s. The plan, approved in 1999, provided several reasons why heavy harvest pressure may adversely affect American eel populations: (1) American eel have a slow rate of maturation, requiring eight to 20+ years to attain sexual maturity; (2) glass eel tend to aggregate seasonally during migration, making them vulnerable to directed harvest; (3) harvest of yellow eel is a cumulative stress, over multiple years, on the same year class; and (4) all fishing mortality occurs prior to spawning.

In response to the 2012 stock assessment, which indicated that the American eel population in U.S. waters is depleted, the Commission approved Addendum III (August 2013) and Addendum IV (October 2014) to the Interstate FMP with the goal of reducing mortality and increasing conservation of American eel stocks across all life stages. Addendum III establishes new management measures for both the commercial (glass, yellow, and silver) and recreational eel fisheries, and implements fishery-independent and fishery-dependent monitoring requirements. Addendum IV established a coastwide quota of 907,671 pounds (known as the coastwide cap) for yellow eel fisheries, reduced Maine’s glass eel quota to 9,688 pounds (2014 landings), and allowed for the continuation of New York’s silver eel weir fishery in the Delaware River.

Addendum V also continued the allowance of a glass eel aquaculture plans, in which a state may request to harvest up to 200 pounds of glass eel from their state waters for use in domestic aquaculture activities. Currently Maine and North Carolina are the only states that have requested and been approved to implement glass aquaculture programs for the 2020 fishing season.