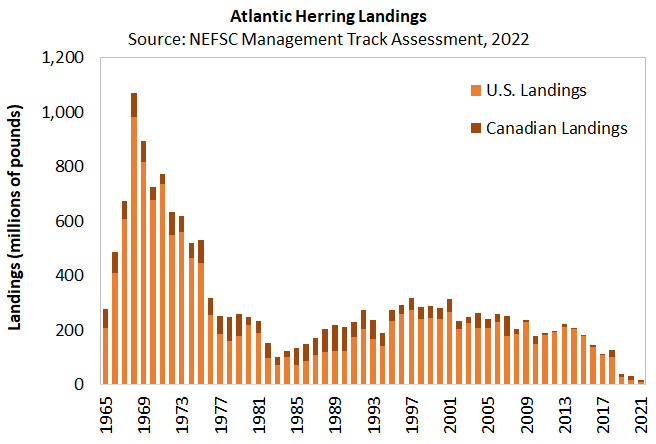 Atlantic herring are one of the most important species in the Northeast because of the vast role they play in the marine ecosystem and their importance to fishermen. Herring form the base of the food web as a forage fish for marine mammals, seabirds and many fish throughout the Mid-Atlantic and Northeast. Schooling herring serve as an important prey resource for migrating whale and dolphin populations on which eco-tourism activities, such as whale watching, depend. Atlantic herring also provide effective and affordable bait to lobster, blue crab and tuna fishermen, and are sold as canned sardines, steaks and kippers. They are also a valued commodity overseas where they are frozen and salted.

The commercial herring fishery in New England developed in the late 19th century, spurred by the development of the canning industry. The lobster fishery developed about the same time, creating a market for herring as bait. Commercially landed herring are caught using purse seines and mid-water trawls. Catch in the Atlantic herring fishery increased in the 1960s, largely due to a foreign fishery which developed on Georges Bank. U.S. landings in the 2000s were fairly stable around 93,448 mt (206 million pounds) but have decreased to below 10,000 mt (below 22 million pounds) in 2020 and 2021, the lowest landings in the time series. 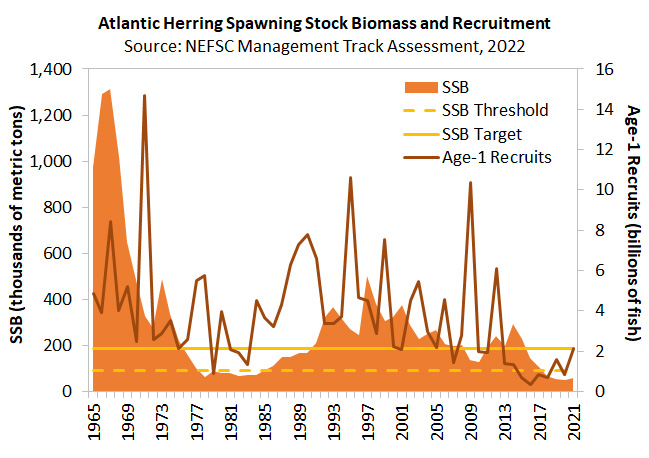 A 2022 Management Track Assessment was completed by the Northeast Fisheries Science Center and peer-reviewed in June 2022. The 2022 assessment is an update from the 2020 management track assessment and is based on the age-structured model (ASAP) from the 2018 benchmark assessment. The 2022 assessment updated the methods for calculating the biological reference points and projections to (1) account for mortality from the fixed gear fishery and (2) use a subset of the recruitment time series (1992-2019) based on analysis suggesting a shift in environmental conditions since 1992 affecting recruitment. The 2022 assessment update indicates the Atlantic herring stock is overfished but not experiencing overfishing based on the biological reference points for spawning stock biomass (SSB) and fishing mortality (F). Atlantic herring SSB in 2021 was estimated to be only 21% of the SSB target. F in 2021 was estimated to be 0.15, which is below the overfishing threshold of 0.5.

Maine, New Hampshire and Massachusetts continue to modify days out of the fishery during the season to prolong the fishery in Area 1A, making herring available during peak demand. The Area 1A sub-annual catch limit (ACL) is 961 metric tons (mt) after adjusting for the overage from 2020, the 30 mt fixed gear set-aside, and the fact that Area 1A closes at 92% of the sub-ACL. In October 2021, the Board established the following seasonal allocations for the 2022 Area 1A sub-ACL: 72.8% available for season 1 (June 1 – September 30) and 27.2% available for season 2 (October 1 – December 31). Effective 6 PM on November 7, 2022, the Area 1A directed fishery will close effective 6:00 p.m. on November 7, 2022 and remain closed until further notice. Vessels that have entered port before 6:00 p.m. on November 7, 2022 may land and sell, from that trip, greater than 2,000 pounds of herring from Area 1A. During a closure, vessels participating in other fisheries may retain and land an incidental catch of herring that does not exceed 2,000 pounds per trip or calendar day. In addition, directed herring vessels traveling through Area 1A must have all fishing gear stowed.

The three inshore Atlantic herring spawning areas of eastern Maine, western Maine, and Massachusetts-New Hampshire have independent closures during the fall that may begin on the default dates of August 28, September 23 and September 23, respectively. Actual closure effective dates are determined using the GSI-based forecast system. This method was developed by the Technical Committee, then tested and evaluated for effectiveness during the 2016 fishing season. The GSI-based spawning monitoring system tracks reproductive maturity to align the timing of spawning area closures with the onset of spawning. The modeling efforts to forecast the spawning closures are available at http://www.massmarinefisheries.net/herring/